Church of Our Lady of the Immaculate Conception, Panjim.

In 1943, Panjim was designated the capital of Goa. Almost a century earlier, the Viceroy and may residents of Old Goa had already moved their residences to this city by the mouth of the Mandovi River.

It was a hasty move. Old Goa had been struck by the plague, and so its commercial and residential buildings were literally taken apart, floated down the river, and reconstructed again at the new site.

Perhaps due to the hasty and pragmatic nature of the city, Panjim is short on major monuments. It does, however, have a very distinct Mediterranean air that no other Indian city possesses, particularly in the old Latin Quarter of Fontainhas (Bairro das Fontainhas), and the adjoining hilly, exclusive residential district of the Altinho.

The most important landmark in the city is Nossa Senhora da Immaculada Conceição – the Church of Our Lady of the Immaculate Conception. Built in 1609 in a Baroque style on the side of a hill facing the Garcia da Orta (Municipal Gardens), the church looms over much of Panjim, recalling Lisbon here in the East.

The rest of downtown Panjim is far more functional, with dozens of civic and commercial buildings erected in a no-nonsense neo-classical or art deco style.

It is when one crosses over into the district of Fontainhas that one really gets a sense of “Old Panjim”. Here, through the winding streets one finds many examples of historic 18th and 19th century Indo-Portuguese architecture. The district is residential and the atmosphere is laidback. Here are some of the most spectacular and colourful villas and mansions, and also many a quaint little house.

From a well-preserved well by the side of San Sebastian Church, one can take a path up to the Altinho, where there are unparalleled views of Fontainhas, and also a few examples of startling villas that would been occupied by the aristocratic class in the old days.

Here we rest, contemplating the view. 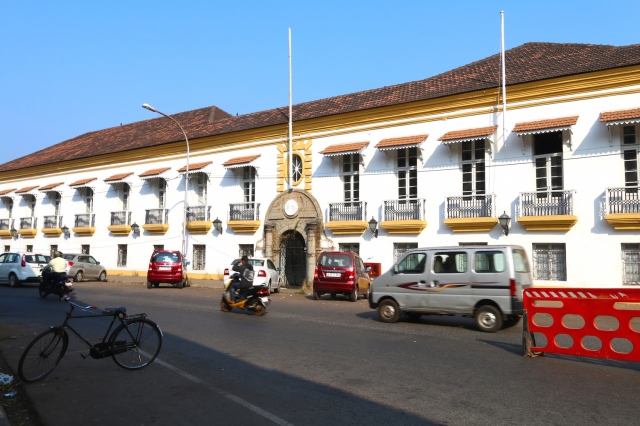 Idalcao’s Palace (the Summer Palace of Adil Shah of the Bijapur Sultanate) predates the Portuguese occupation and probably dates from the 15th century. It was used as the Viceroy’s Residence and became the seat of the Secretariat when Goa reverted to India. 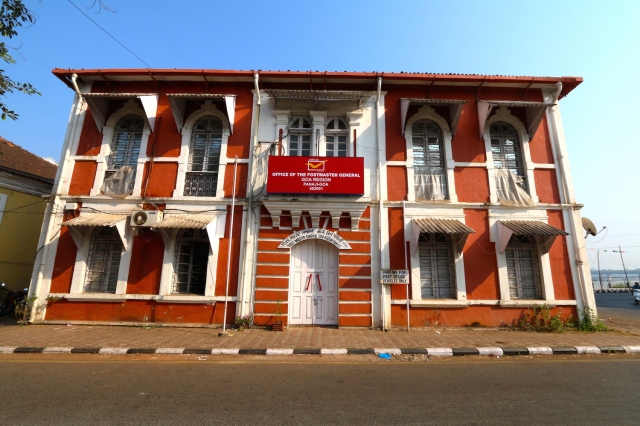 Office of the Postmaster General, on Post Office Square. 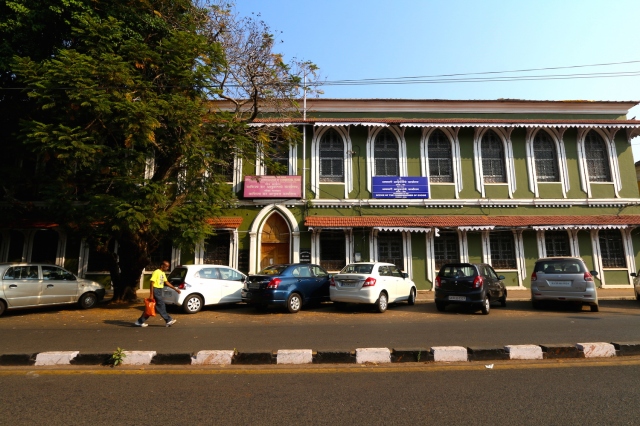 Office of the Commissioner of Excise. 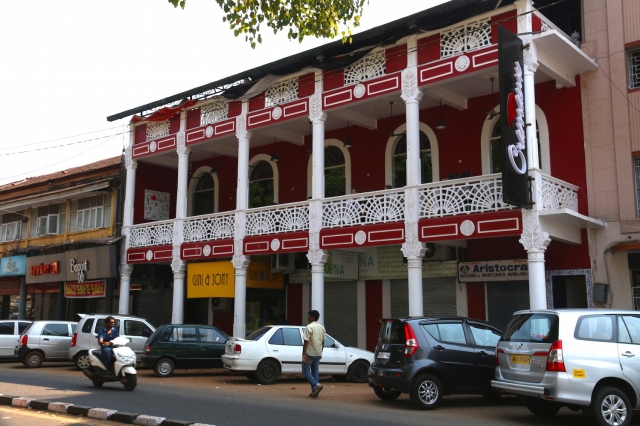 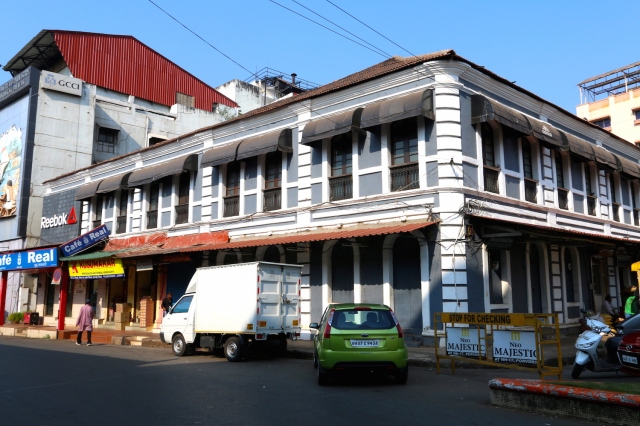 Singbal’s Book House, across from the Church of Our Lady of the Immaculate Conception.

Indo-Portuguese-style architecture with the sloping roof and covered balcony.

Bairro das Fontainhas (and the Altinho) 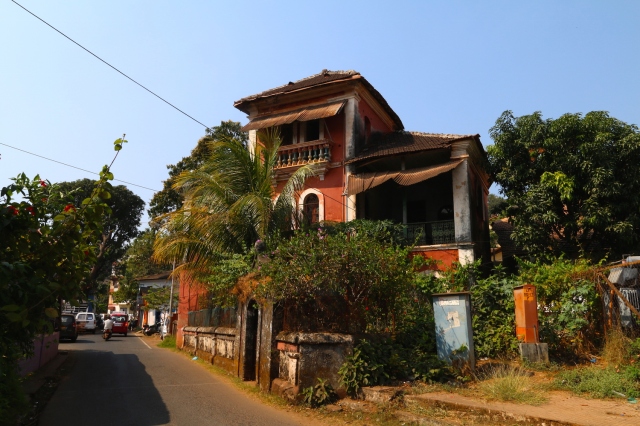 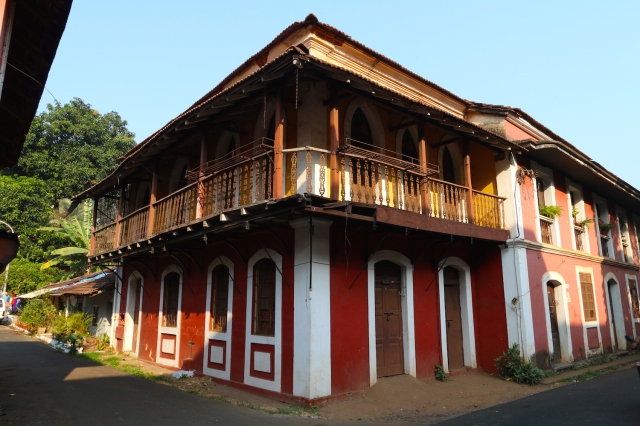 The striking Pink House, with its statues of soldiers on the facade.

A more modern style of Indo-Portuguese. 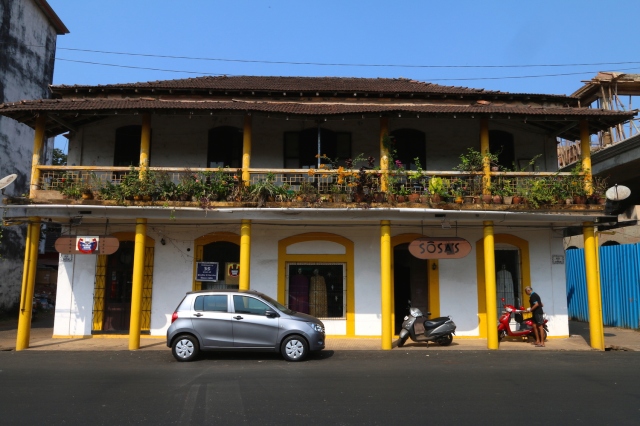 The Horse Shoe Bar and Restaurant is perhaps the best place in Fontainhas to sample Goan cuisine.

Many of the buildings here have been repurposed into boutiques, restaurants, 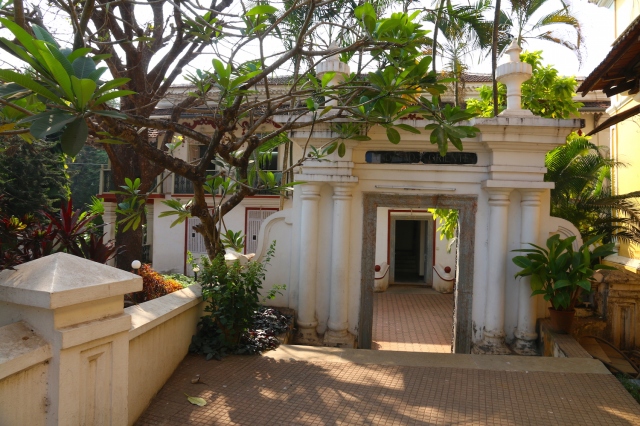 Facade of the Fundação Oriente building.

Hip(ster) cafe in the Old Quarter. Interestingly, this cafe is run by a Goan who had studied in Singapore.

The Old Well that sits by the Chapel of St Sebastian. A path leads up to the Altinho. 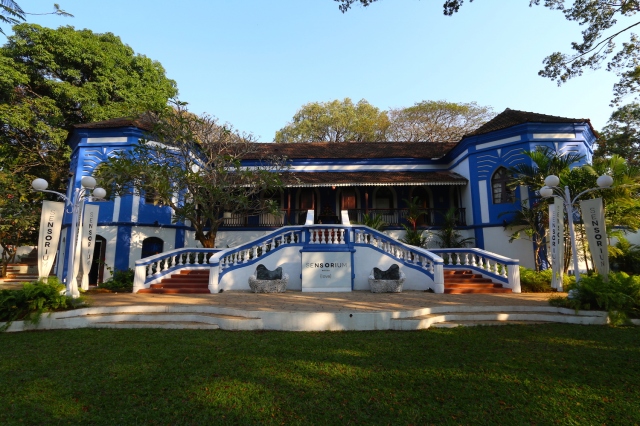 A former mansion in the Altinho, transformed into Sunaparanta – Goa Centre for the Arts. We end our walk here.

A backward glance at the Church of Our Lady of the Immaculate Conception.

I am a wandering cityophile and pattern-finder who is pathologically incapable of staying in one place for any long period of time. When I do, I see the place from different perspectives, obsessive-compulsively.
View all posts by Kennie Ting →
This entry was posted in Art & Architecture, Cities & Regions, Culture & Lifestyle, Heritage, India, Landmarks & History, Photography, Travel & Mobility and tagged Altinho, Architecture, Culture, Fontainhas, Goa, Heritage, History, New Goa, Panaji, Panjim, Port and Princely Cities of the Subcontinent, The Grand Tour, Travel. Bookmark the permalink.