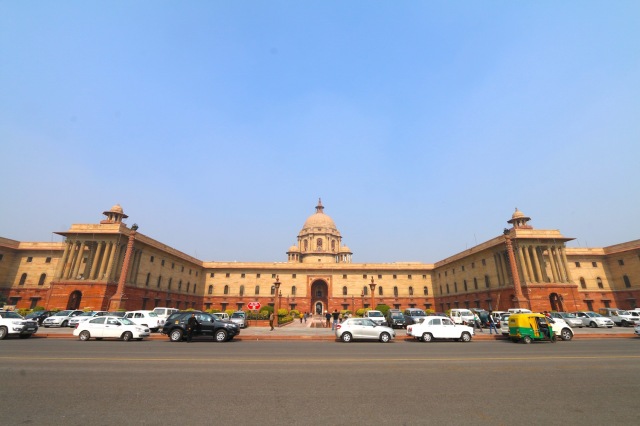 The Secretariat Building, North Block, designed by Herbert Baker and completed in 1927.

From the monuments, thoroughfares and alleyways of Old Delhi, we transition to the epic boulevards and sprawling urban fabric of New Delhi, the Imperial city built by the British and “opened for business” in 1931, less than two decades before the British Imperial project itself would fail in the Subcontinent, and the Republic of India win its independence.

The title of the post features quotation marks for a reason. Unlike the urban centres of the earlier (port) cities featured in this Grand Tour, New Delhi is by no means walkable. It was never planned as such – from the very beginning, the urban plan of this city, built entirely from scratch, was designed to impose and to impress; its radical design also prefigured the advent of the automobile.

In 1911, King George V announced that the capital of the British Raj would be moved from Calcutta to Delhi. The foundation stone of the New Delhi was laid that very year during the Delhi Durbar. Responsibility for the design of the city and many of its buildings proper was given to one Edwin Lutyens; this accounts for New Delhi also being referred to as “Lutyens’ Delhi”. 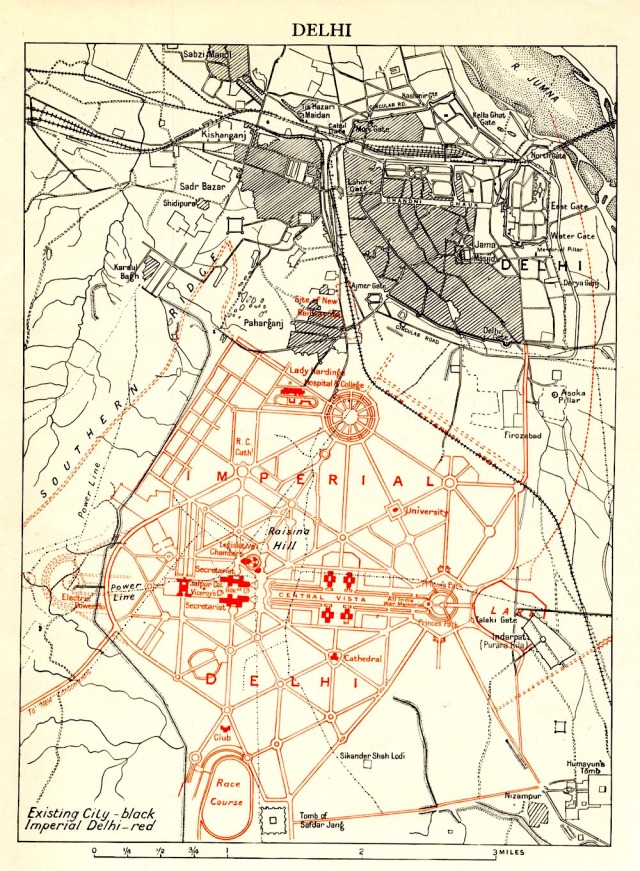 The best way to explore New Delhi is by car. And even then, due to the fact that many of the colonial-era buildings continue to be either offices of government departments, foreign embassies or residences of government officials, the large majority of the historic buildings of New Delhi are unfortunately off-limits to the average traveller.

Photography is also a huge challenge since many of the facades are obscured by closed gates, or by trees and foliage. So one really does one’s best to capture as much of the look and feel of New Delhi as possible in this post.

New Delhi’s most important and breathtaking landmark is its central horizontal axis – the former King’s Way; today’s Rajpath – which bisects the entire city. At the Rajpath’s eastern extremity sits India Gate, and at its Western extremity, the former Viceroy’s House – today’s Rashtrapati Bhawan, or “Presidential Palace”.  The distance between the two is more than 4 kilometres, but in this case, it is well-worth the walk to get a sense of the scale of the city and its monuments.

Around India Gate sit a cluster of former urban palaces owned by various Indian princes, forced to maintain and locate residences in New Delhi as a show of their loyalty to the British Raj.  Many of these former palaces have been re-used as government offices, though two in particular are publicly accessible – these are the delightful Bikaner House, which is a privately-run cultural and lifestyle centre, and Jaipur House, which houses the National Gallery of Modern Art. 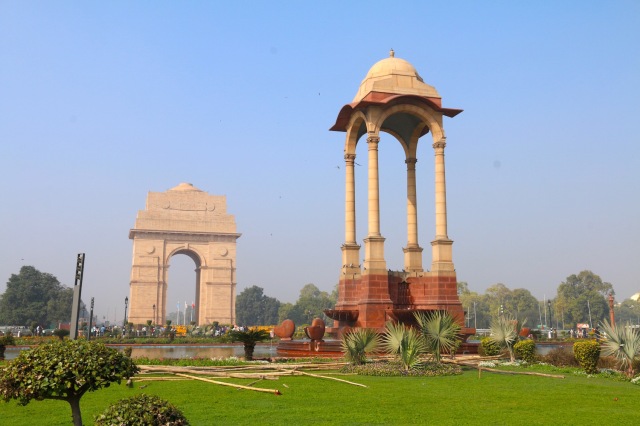 India Gate (1931), by Edwin Lutyens, and the Canopy (also by Lutyens), which once housed a statue of King George V. 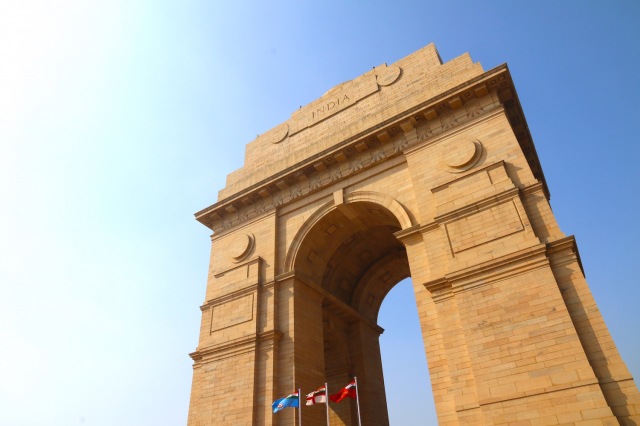 Close-up of India Gate. The inscription at the top reads “TO THE DEAD OF THE INDIAN ARMIES WHO FELL AND ARE HONOURED IN FRANCE AND FLANDERS MESOPOTAMIA AND PERSIA EAST AFRICA GALLIPOLI AND ELSEWHERE IN THE NEAR AND THE FAR-EAST AND IN SACRED MEMORY ALSO OF THOSE WHOSE NAMES ARE HERE RECORDED AND WHO FELL IN INDIA OR THE NORTH-WEST FRONTIER AND DURING THE THIRD AFGHAN WAR” 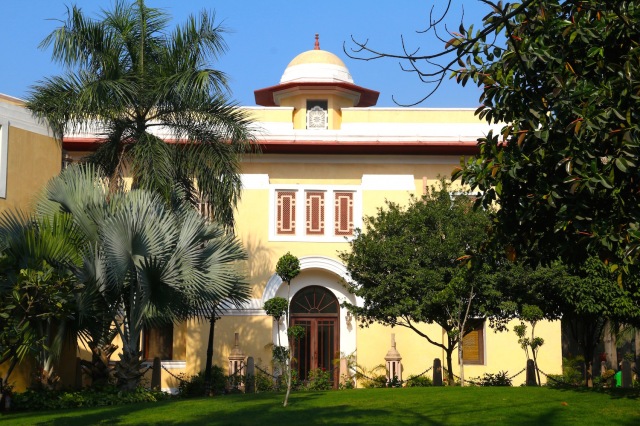 Bikaner House is one of a few princely palaces that sit in a ring around the Canopy. It was recently refurbished is now an excellent 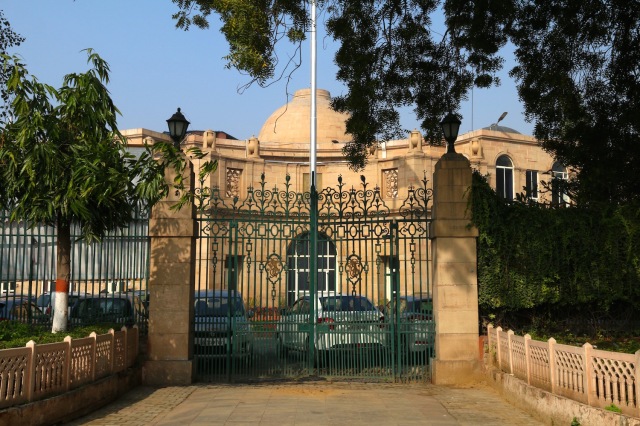 Baroda House, designed by Lutyens and completed in 1936 also sits in the first ring of palaces around the Canopy. Today it houses the Headquarters of the Northern Railways. 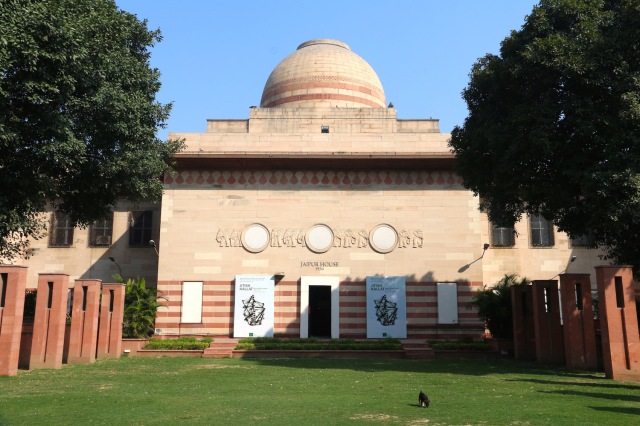 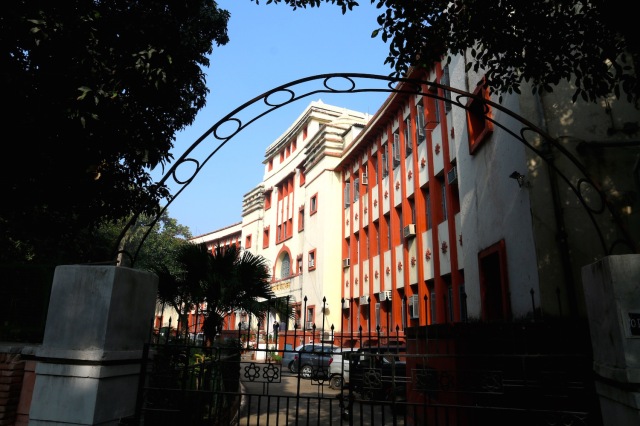 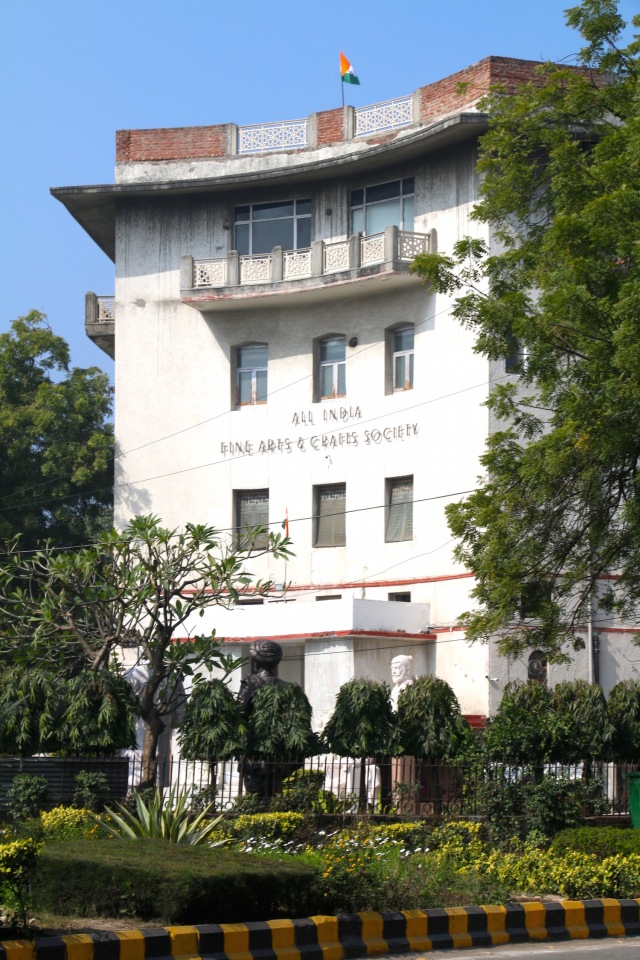 Up the Rajpath towards Raisina Hill. 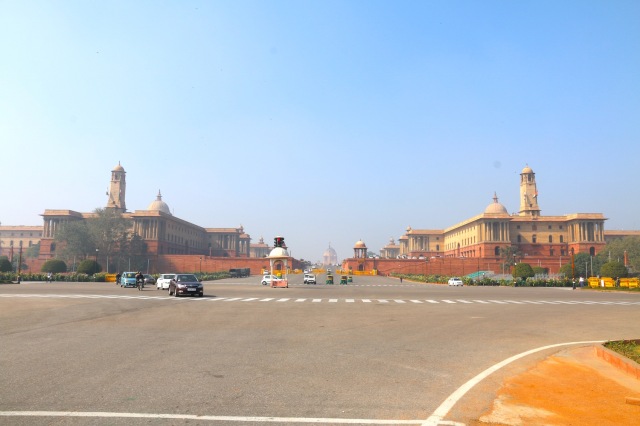 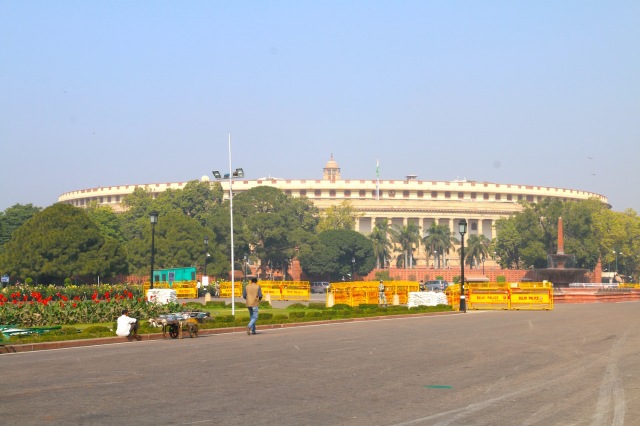 The Parliament Building (1927), by Lutyens and Baker. 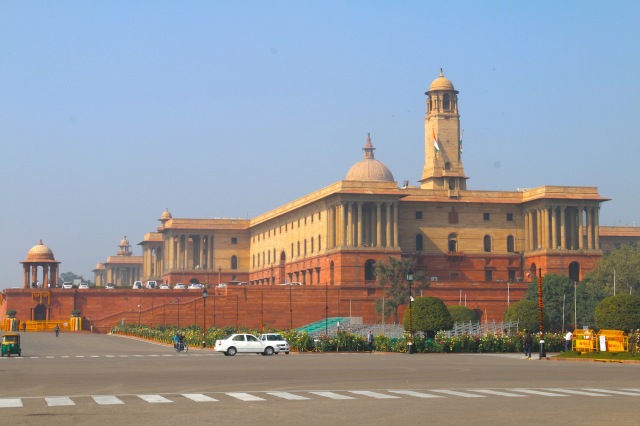 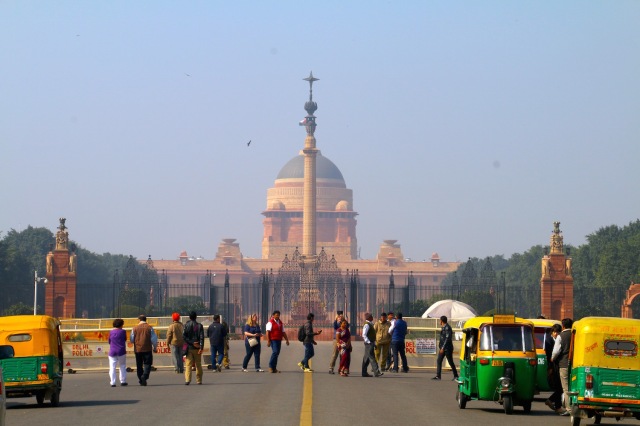 North of New Delhi lies Connaught Place, the city’s commercial centre – a monumental, circular “square” ringed by Georgian-style neo-classical architecture.  A walk around Connaught Place, and a short jaunt down south as far as the historic Imperial Hotel (to be featured in the next post), is also a must. 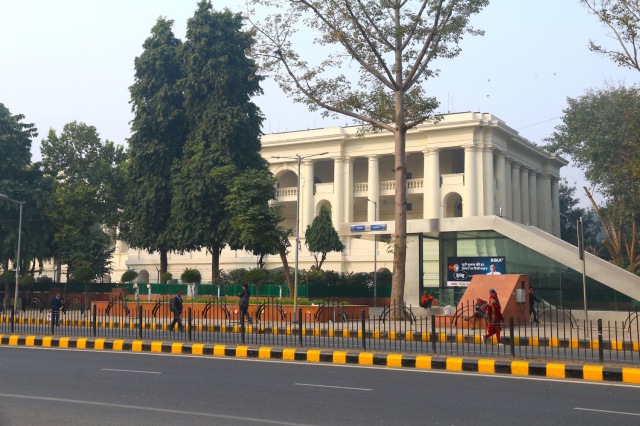 The Western Court, along Janpath, towards Connaught Place. 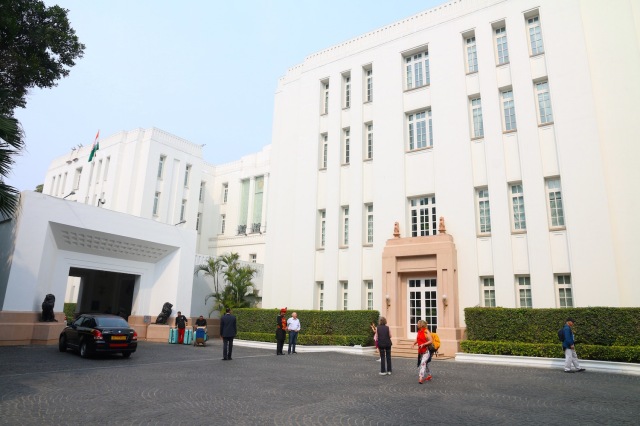 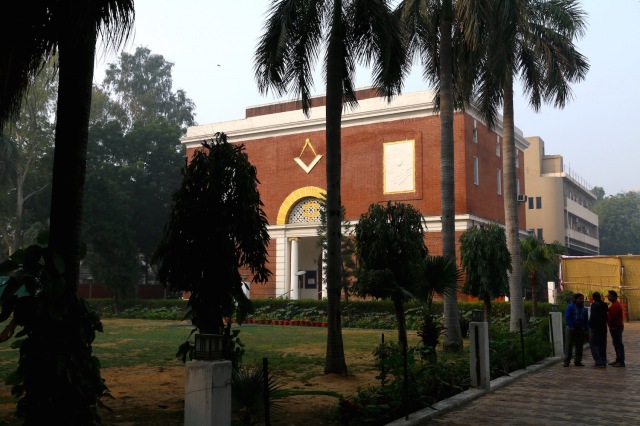 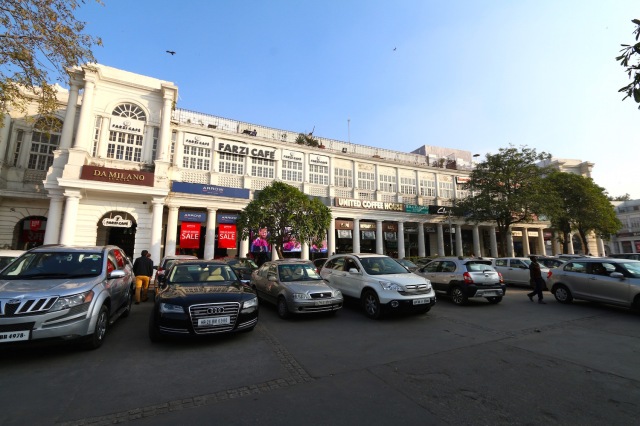 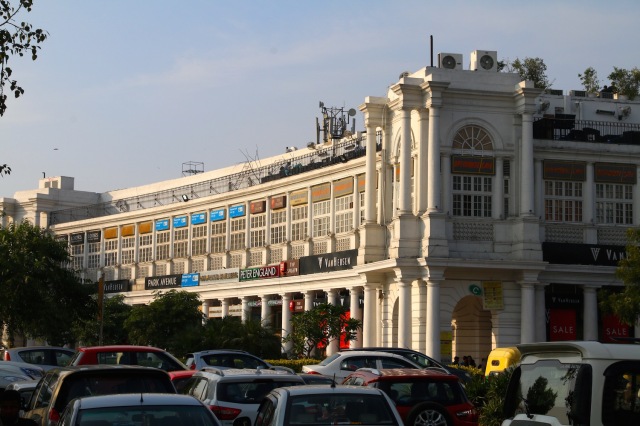 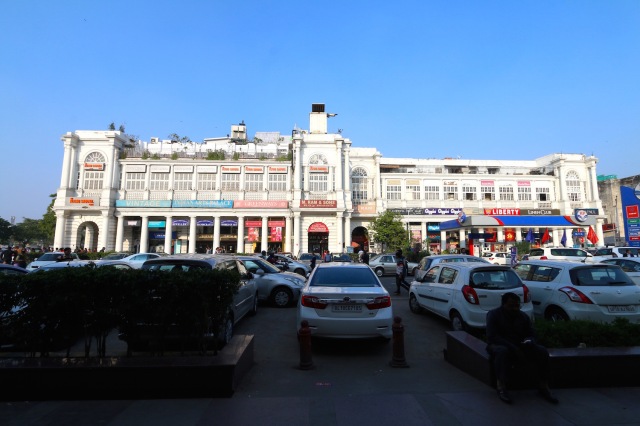 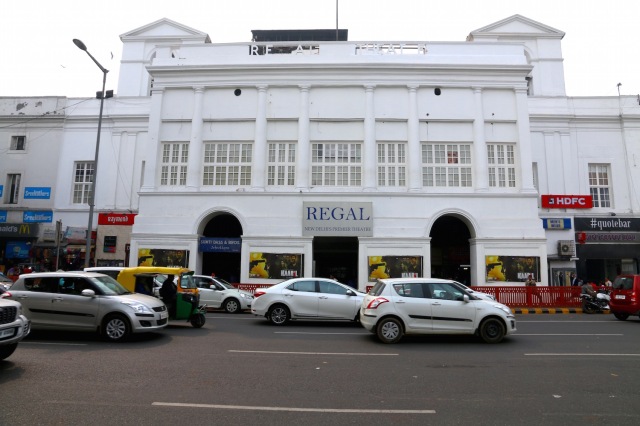 Finally, immediately north and south of Rajpath sits the Lutyens Bungalow Zone (LBZ) – an exclusive area of low-rise bungalows in the neo-classical style, designed by Lutyens (hence the name) and built in the 1930s.

These were built to be residences of government officials, and many of these continue to be residences of high-ranking government officials today, while others house embassies and high commissions. Once again a walk in the Lutyens Bungalow Zone, even if its a small section of it – the area just north of India Gate is a good option – is an excellent way to get a feel for scale of the urban planning. 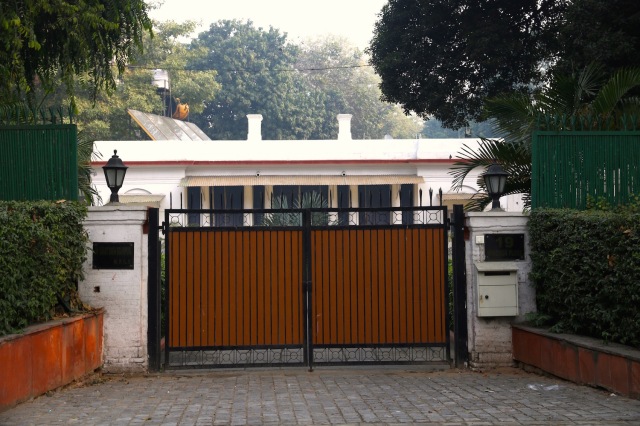 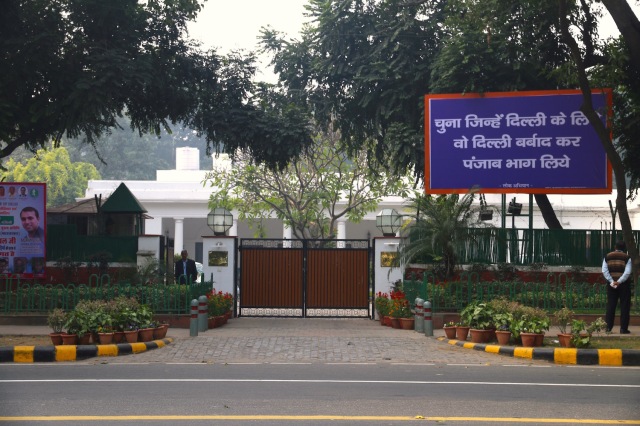 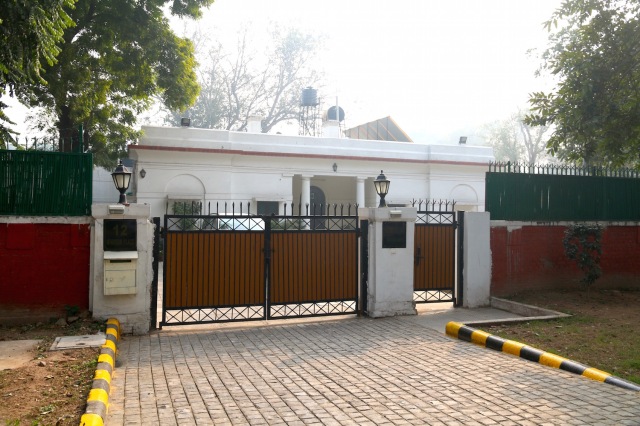 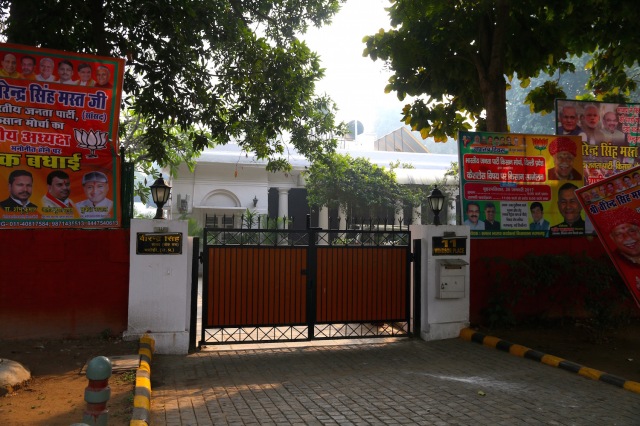 These three walks are probably the best one can do to get a sense of New Delhi’s radically modern urban plan and its monumental scale. Certainly, the pictures here barely do it justice. 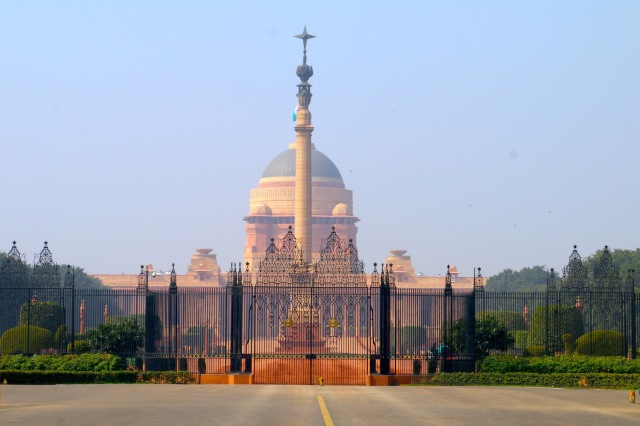 A backward glance at the Rashtrapati Bhawan.

I am a wandering cityophile and pattern-finder who is pathologically incapable of staying in one place for any long period of time. When I do, I see the place from different perspectives, obsessive-compulsively.
View all posts by Kennie Ting →
This entry was posted in Art & Architecture, Cities & Regions, Culture & Lifestyle, Heritage, India, Landmarks & History, Photography, Travel & Mobility and tagged Connaught Place, Delhi, Edwin Lutyens, India, King's Way, Lutyens Delhi, Lutyens' Bungalow Zone, New Delhi, Port and Princely Cities of the Subcontinent, Rajpath, Rashtrapati Bhawan, The Grand Tour, Viceroy's House. Bookmark the permalink.