A Walk Through Danish Tranquebar 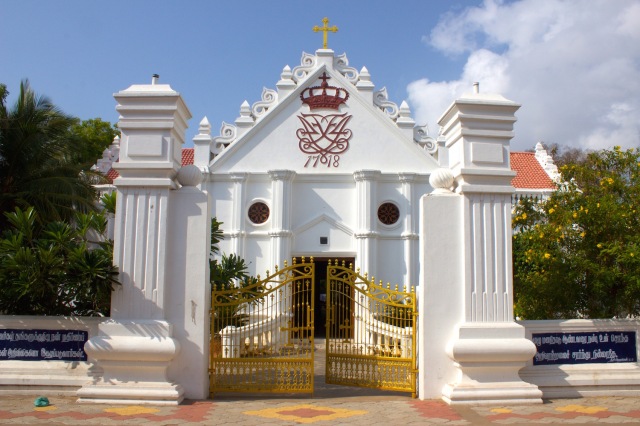 The New Jerusalem Church, consecrated in 1718, during the reign of King Frederick IV (whose royal monogram adorns the facade of the building), is one of the most important Danish monuments in the town of Tranquebar.

In this first of two walking tours of the historic Danish town of Tranquebar, Dream Of A City literally takes you, the reader, down King’s Street – the high street in Tranquebar – where we point out the main sights.

And now if you’re ready, let’s enter the town through it’s Landporten, or Town Gate…

Enter Tranquebar through its historic Landporten, or Town Gate. This gate was built in 1792 and replaced an earlier gate built in the 1660s, the same period the city’s fortifications – now almost all gone – were built.

Immediately to your left on King’s Road you see a building that houses a ladies’ hostel.

To your right on King’s Road sits the former Gatehouse – a Danish-Tamil style building, today a bed and breakfast managed by The Neemrana Group.

Down from The Gatehouse is St Theresa’s Convent.

Just next door on King’s Road is Van Theylingen’s house, with a similar Danish-Indian architecture.

Next comes the New Jerusalem Church, famous for Bartholomaus Ziegenbalg, the German Lutheran preacher who founded the church and is today still buried in its premises. 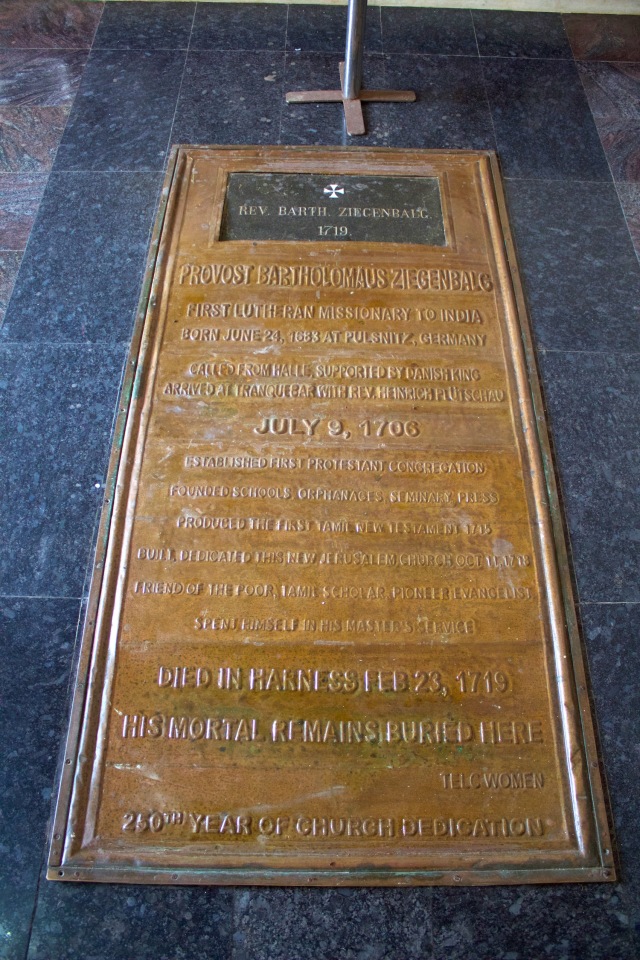 Memorial to Ziegenbalg, in the New Jerusalem Church. 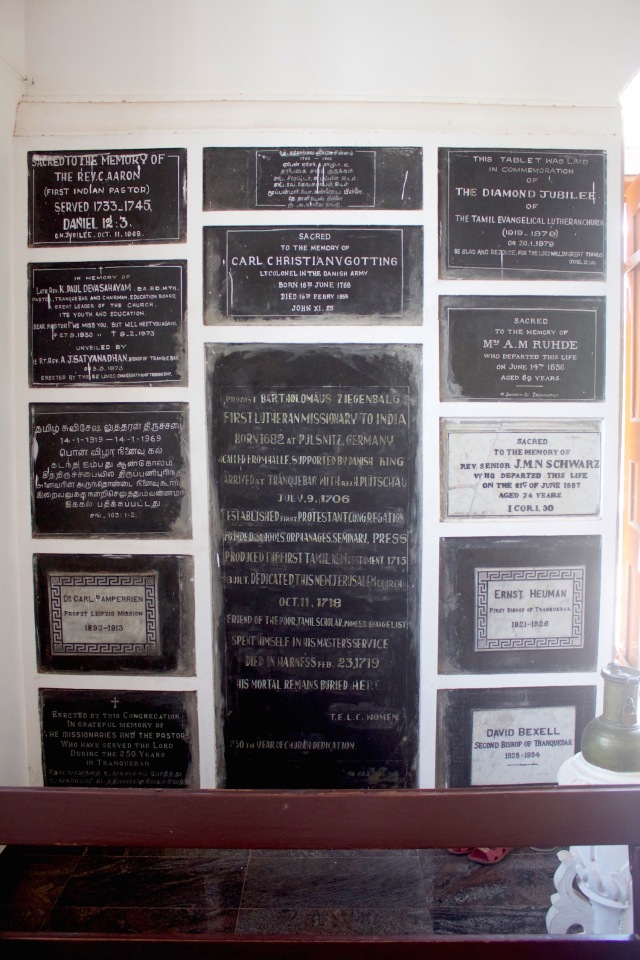 Gravestones to former Danish residents of the city. 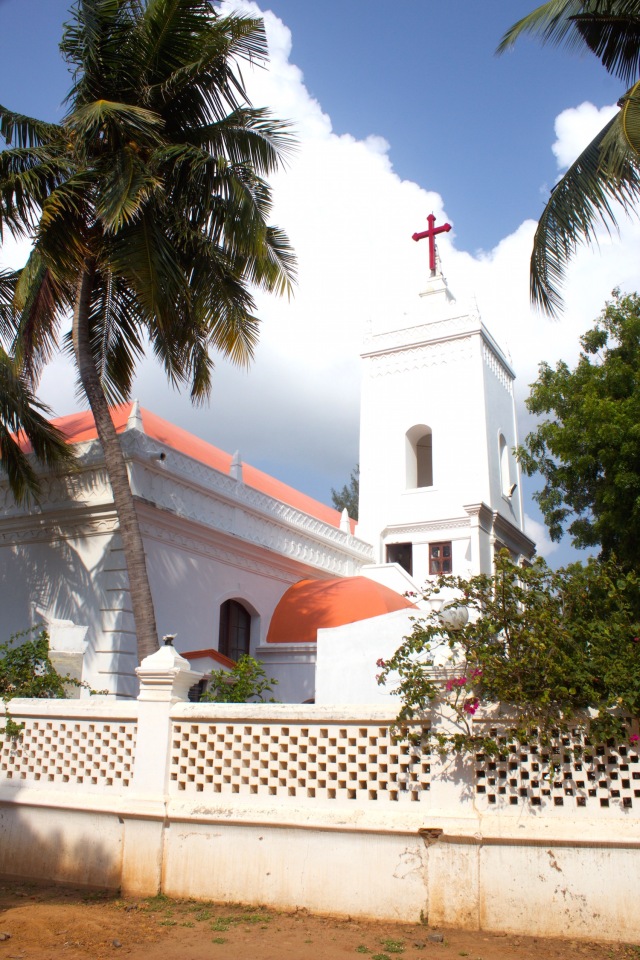 The Zion Church is the oldest Protestant Church in India. It was consecrated in 1701.

The Church of Sweden Mission Bungalow

Turn right on Queen’s Street and take a detour to the Old Danish Cemetery, where former Danish colonials were buried.

Take a right on Queen’s Road and make another detour to Borgan Street to view Gruendler’s House. 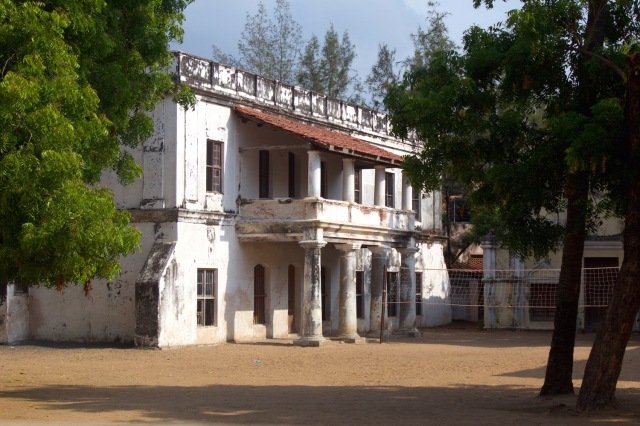 Just down the road is a complex of European buildings that supposedly houses a Church Hall and a Museum.

Return to the junction of Queen’s Street and King’s Street, with the Parade Ground and Fort Dansborg in the near distance.

Back onto King Street, to the left of the Parade Ground stand three important buildings. The first is the former Commander’s House, also known as Halkier’s House, dating from the early 1700s.

Next stands the Governor’s Bungalow – the official Danish Governor’s Residence, dating to the late 1700s.

Finally there is the former Summer Residence of the British Collector, restored as Bungalow on the Beach, a luxury hotel managed by The Neemrana Group.

The British-built Post Office sits just around the corner from The Bungalow on the Beach, on Post Office Street.

Cut across the Parade Ground to the entrance of Fort Dansborg, today a Danish Fort Museum.

Spend some time inside the museum, which houses some artefacts from the era, and presents a history of Tranquebar and Danish India 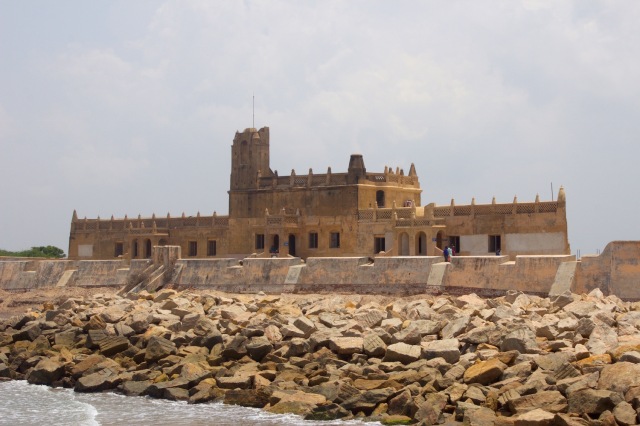 View of the imposing Fort Dansborg.

Fort Dansborg from the shore.

View of Bethlehem Church, the second Protestant Church built in India, in the suburb of Porayar – not strictly in Tranquebar at all.

And finally, we leave the way we entered, through the Landporten.

I am a wandering cityophile and pattern-finder who is pathologically incapable of staying in one place for any long period of time. When I do, I see the place from different perspectives, obsessive-compulsively.
View all posts by Kennie Ting →
This entry was posted in Art & Architecture, Cities & Regions, Culture & Lifestyle, Heritage, India, Landmarks & History, Photography, Travel & Mobility and tagged Danish India, Fort Dansborg, Landporten, New Jerusalem Church, Port and Princely Cities of the Subcontinent, Tharangambadi, The Grand Tour, Tranquebar, Ziegenbalg. Bookmark the permalink.

1 Response to A Walk Through Danish Tranquebar