A Wander through the Ghats of Benares (Varanasi), Part Two

Continuing with another view of bustling Dashashmewadh Ghat.

Part Two of this wander through the legendary ghats of Benares takes in Dashashmewadh Ghat to Panchganga (“five river”) Ghat.  Beyond Panchganga, I venture no further, nor would the river boats take me onwards.

There are three major ghats here worth noting.

The first is Man Mandir Ghat, with its palace, built in 1585 by the Raja of Amber, Sawai Man Singh. On the palace sits an astronomical observatory, built in 1710 by Sawai Jai Singh II (a descendant of Man Singh), and better known for building the city of Jaipur (“Jai’s City”) in today’s Rajasthan. This observatory, known as Jantar Mantar, is one of three important observatories Jai Singh II built. The other two Jantar Mantars sit in Delhi and Jaipur, respectively (and they will feature later on in this Grand Tour).

The second major ghat is Marnikarnika Ghat – this is where many of India’s Hindus come to die and be cremated. Some 1000 bodies are apparently cremated here each year. The cremation pyres here burn night and day, and it is a sight both gruesome and humbling. The ghat itself is one of the oldest ghats to be built in stone, in 1302.  It is pretty much impossible to venture near the ghat – the best view may be had from the respectful vantage point of the river.

Finally, the third and finally ghat of note is Panchganga Ghat, built in 1580 by a minister of the Mughal Emperor Akbar. The ghat extends up into the sky in a spectacular fashion, culminating in the majestic Alamgiri Mosque, built in 1673 by Akbar’s great-grandson, the Mughal emperor Aurangzeb. Once adorned with two towering minarets, one of the two collapsed in the early 1900s, and the other was demolished in order that the mosque would maintain its symmetry. The mosque is a reminder that for centuries now, Benares hasn’t just been a Hindu city, but is also home to a sizeable Muslim community.

Man Mandir Ghat is home to the Man Mandir Palace, built by Sawai Man Singh in 1585. To the right, can be seen the Jantar Mantar, built by his descendant, Jai Singh II in 1710. 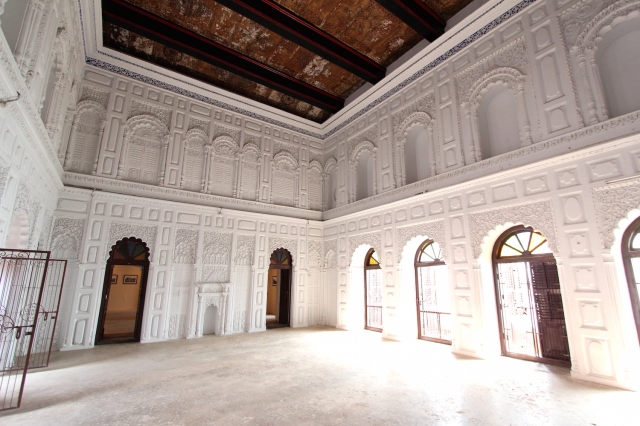 Interior of the Man Mandir Palace, with its elaborate Rajput-style architecture. 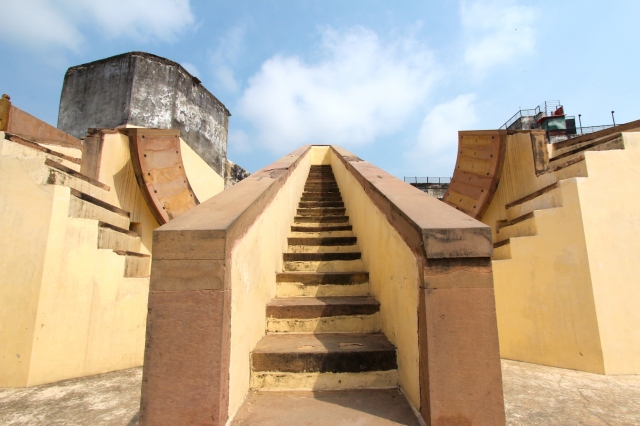 The Jantar Mantar Astronomical Observatory, built by Sawai Jai Singh II in 1710. It’s siblings sit in New Delhi and just beside the City Palace in Jaipur. 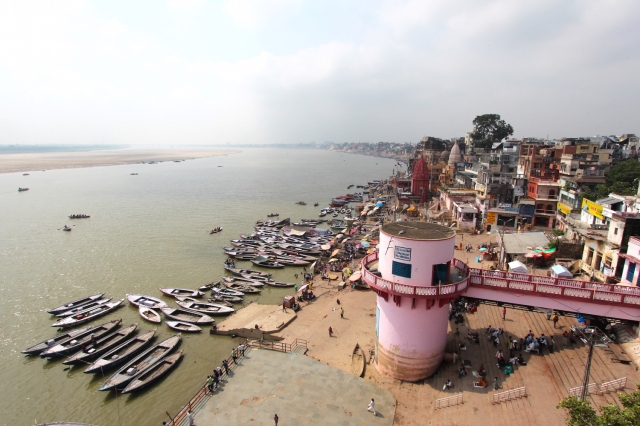 View of Dashashmewadh and Rajendra Prasad Ghats from the Jantar Mantar.

Close-up of the blood-red apartments on Tripurabhairavi Ghat, showing the elaborate latticed balcony. 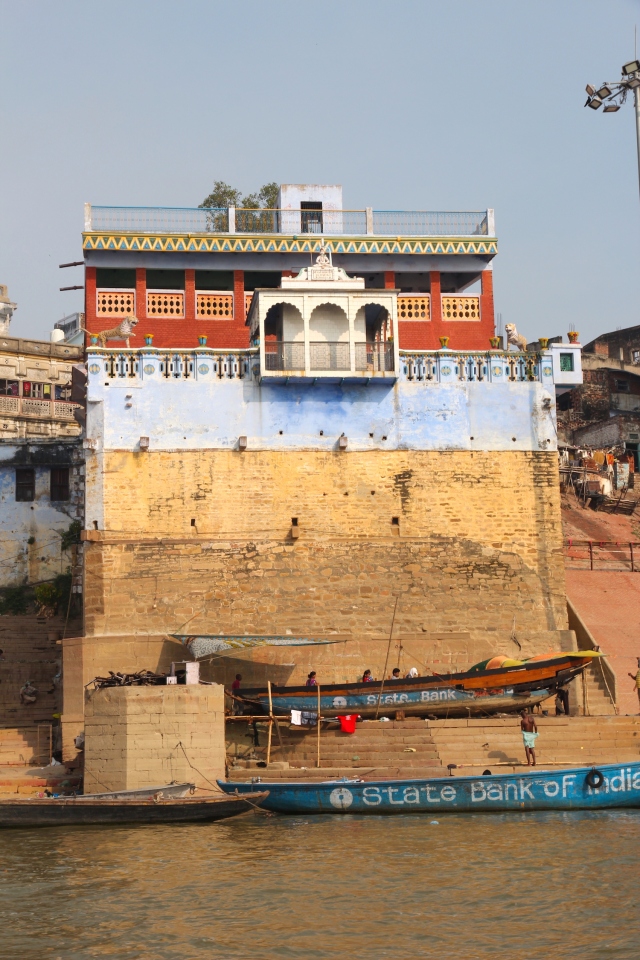 Lalita Ghat and Nepali Ghat, with its historical Nepali Temple.

Marnikarnika Ghat is the heart of this section of the ghats. This is the largest cremation ghat in Benares with more than 1000 bodies cremated here a year. 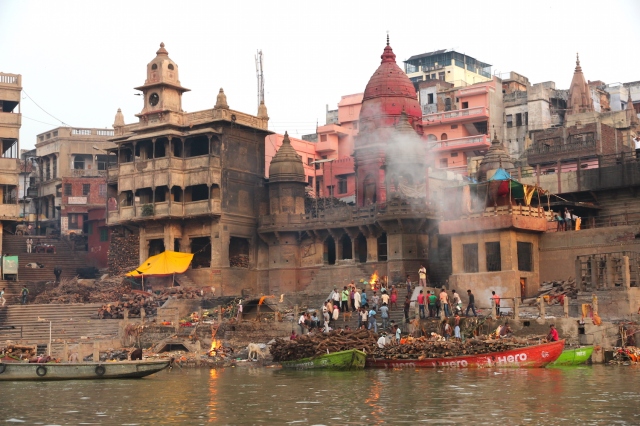 Close-up of Marnikarnika Ghat, with cremation pure burning. This is the closest one can get to the ghat as you will not be allowed to pass on foot. 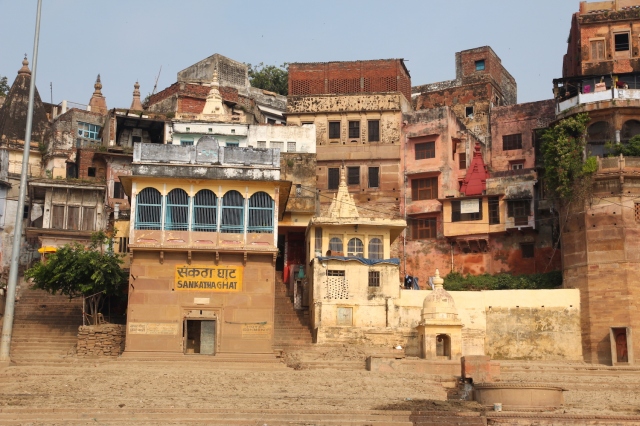 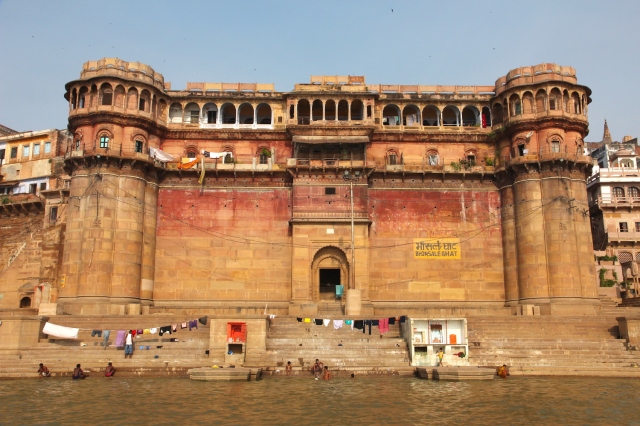 Just next door is Bhonsale Ghat, built by the Maratha kings in the early 1800s. This palace recalls Chet Singh Palace in Part One of the walk.

Naya Ghat with its hotel and Peshwa’s Shree Ganesh Mandir. 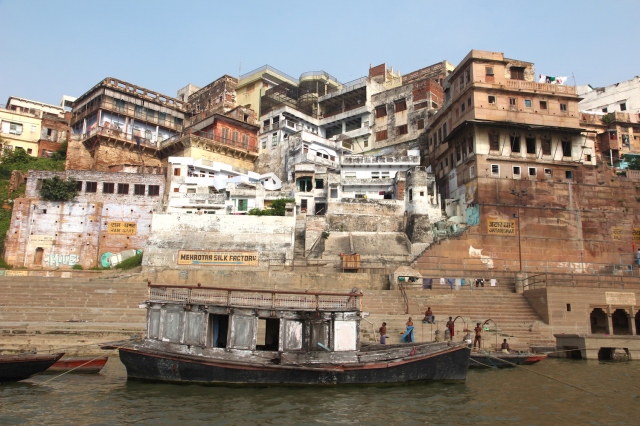 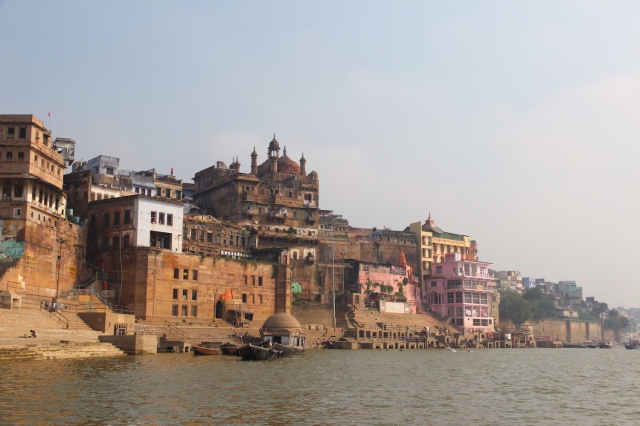 View of Lakshmanbala Ghat and Panchganga Ghat, in the distance. Alamgiri Mosque is visible at centre. 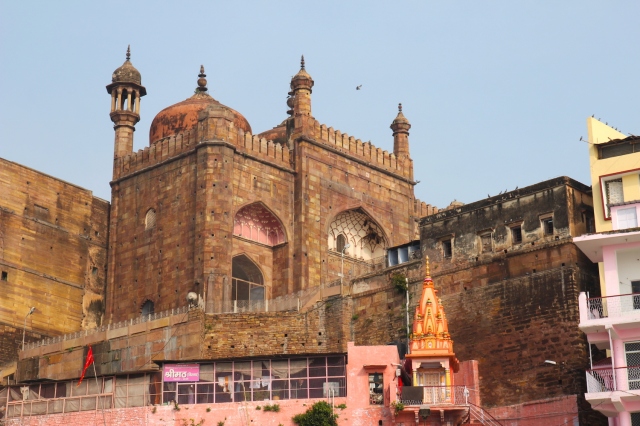 Close-up of Alamgiri Mosque, built in 1673 by the Mughal Emperor Aurangzeb. It is one of two important mosques in Benares, the second one being the Gyan Vyapi Mosque (which is almost impossible to photograph). 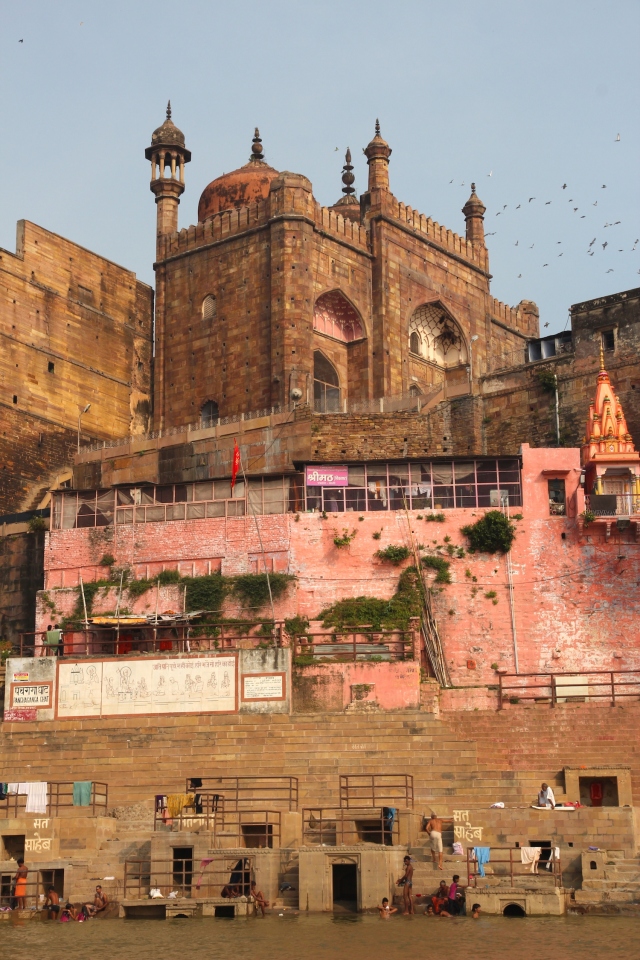 And finally, a view of Panchganga Ghat, which concludes our walking tour of the ghats of Benares (Varanasi).

I am a wandering cityophile and pattern-finder who is pathologically incapable of staying in one place for any long period of time. When I do, I see the place from different perspectives, obsessive-compulsively.
View all posts by Kennie Ting →
This entry was posted in Art & Architecture, Cities & Regions, Culture & Lifestyle, Heritage, India, Landmarks & History, Photography, Travel & Mobility and tagged Alamgiri Mosque, Benares, Dashashmewadh Ghat, Ghats, India, Man Mandir Ghat, Marnikarnika Ghat, Panchganga Ghat, Port and Princely Cities of the Subcontinent, The Grand Tour, Varanasi. Bookmark the permalink.

1 Response to A Wander through the Ghats of Benares (Varanasi), Part Two