Of Whale Bones, Teh Tarik and Lion Dances… or the Remarkable Similarities between Asia’s Port Cities

Last week, I popped into the Museum to admire the whale bone in its natural history galleries, dropped by a streetside stall to have a cup of teh tarik (pulled tea) and – it being the Chinese Lunar New Year – also visited the temple to view the Lion Dance.

Except, of course, I wasn’t in Singapore at all last week.  I was in the city of Calcutta, India.

That’s right.  You heard me.

The Museum was the Indian Museum on Chowringhee Road.  Teh tarik, was exactly what it was, pulled by a Bengali streetside tea-seller in the middle of Bowbazar – the city’s ethnic district. And the Lion Dance?  It took place at the temple in the city’s Chinatown.

I suppose it’s rather coy of me to mention this only NOW, midway through the second of my Grand Tours of port cities… But the fact is, one of my key learning points in the course of these past three years of travel through Asia, is just how SIMILAR these colonial port cities are!

Here in Singapore, we’ve always claimed that we were unique in our multi-cultural make-up.  That’s true in only one aspect – that we have continued, post-colonialism, to trumpet this multi-culturalism as an intrinsic part of our national identity; whereas waves of nationalism in the other post-colonial countries (and cities) in Asia has meant erasure or at least a “dumbing down” of the multi-culturalism in their respective port cities.

The fact is, Singapore is no different than Rangoon, Penang, Malacca, Calcutta, Hong Kong and even Shanghai in terms of not just the wealth of colonial architecture still extant in the city; but also the surprising multi-culturalism that was a product of the colonial era.

In all these cities, we see this multi-culturalism in the diversity of places of worship – Anglican Churches, Hindu Temples, Buddhist Temples, Taoist Temples, Sunni mosques, Shi’a mosques, synagogues, Armenian Churches, Portuguese Catholic Churches, even Greek Orthodox Churches in some cases.

And these are just the port cities of the British Empire.  When one explores other colonial port cities – Batavia (Jakarta), Soerabaja in the Dutch East Indies, Saigon and Hanoi in French Indochina and Manila in the Spanish East Indies – one sees the same pattern emerge: a wealth of different cultures inhabiting the same port city.

Because the port cities, at a fundamental level were all the same: entrepots for trade, commerce, people and therefore the religions and cultures that they brought.

And at the time, ALL of us port cities were linked in one regional and global network of trade and commerce that made us all siblings of each other.

Therefore we ended up with the same mix of peoples; the same kinds of Museums with the same mish-mash of stuffed animals and whalebones, and quite possibly the same rich stew of cultures, foods and drinks.

Streetside teh tarik in Bowbazar, Calcutta.

This point came over me in a wave that afternoon as I stood with my cup of teh tarik in my hands in the streets of Bowbazar, Calcutta.  I put the terracotta cup to my mouth and took a small sip, and immediately felt a tingling warmth and familiarity overwhelm me; like the petite madeleine, dunked in a tisane, overwhelms the narrator in Marcel Proust’s In Search of Lost Time.

How strange!!  I thought as I smiled secretly to myself.  How strange to feel this sense of HOME in a city I had never been to before!  How small the world must be! 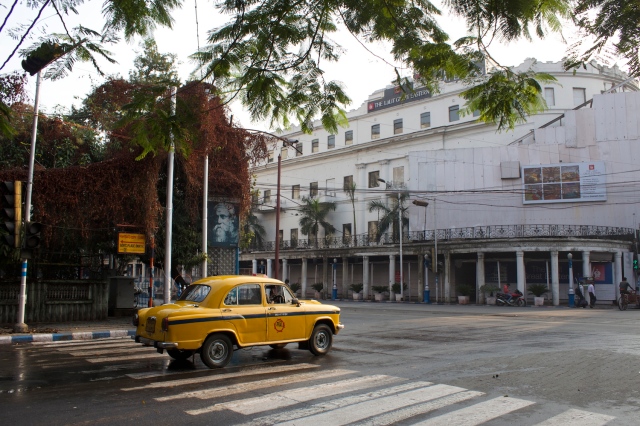 Just so you don’t mistake where I was: iconic Calcutta yellow cab, portrait of Rabindranath Tagore, and the former Great Eastern Hotel.

I am a wandering cityophile and pattern-finder who is pathologically incapable of staying in one place for any long period of time. When I do, I see the place from different perspectives, obsessive-compulsively.
View all posts by Kennie Ting →
This entry was posted in Art & Architecture, Cities & Regions, Culture & Lifestyle, Home, Photography, Sociology & Urban Studies, Travel & Mobility and tagged Calcutta, Home, Port Cities, Teh tarik, Whale bones. Bookmark the permalink.