Wandering the Streets of the Old Town, Amoy (閒遊老廈門)

Historic Shophouse Architecture in the streets of Old Amoy/Xiamen – cousins of those in Singapore.

Across the narrow straits from Gulangyu Island sits Old Amoy – the Chinese settlement, and the commercial heart of the former colony.  Here’s where the city’s major banks, trading and merchant houses were situated.  Here it was that tea, rice, lacquer, silks, spices from China were shipped to all over the world.

Here therefore, are found the dozens of winding streets flanked on both sides by Chinese shophouses, of the kind found all over the port cities of Southeast Asia, wherever there are significant Chinese populations.  Walking down these streets is like walking down the streets of Old Penang, Malacca, Singapore, Surabaya…

There are two parts to this meandering afternoon spent in the Old Town.  The first takes in the former Amoy Bund, and the second, the streets of the Old Town proper.

Part I – The Amoy Bund

Like its sister city Shanghai, Amoy too had a Bund – a grand waterfront precinct erected by the British and other imperial powers, and housing some of the most important banks and trading houses in the world in the 1800s and early 1900s.

Much of the Bund in Amoy was erected between 1870, just after Amoy became a treaty port; and in the early 1900s, just before World War I.  Later on in the 1920s and ’30s, returning Overseas Chinese from Taiwan and the Nanyang region (Southeast Asia) would enter the scene, building their own commercial buildings, in their own unique style blending East and West, wherever there was a spot in the existing European bund.

Today, a continuous section of the Bund remains only to the far left of the stretch.  From the Gulangyu Ferry terminal, across the major thoroughfare that fronts the Bund, one can just about get a glimpse of how imposing and elegant the sweep of colonial edifices would have looked like in the old days.  Today, the buildings stand somewhat lost in amidst the towering new city that is emerging just around the corner. 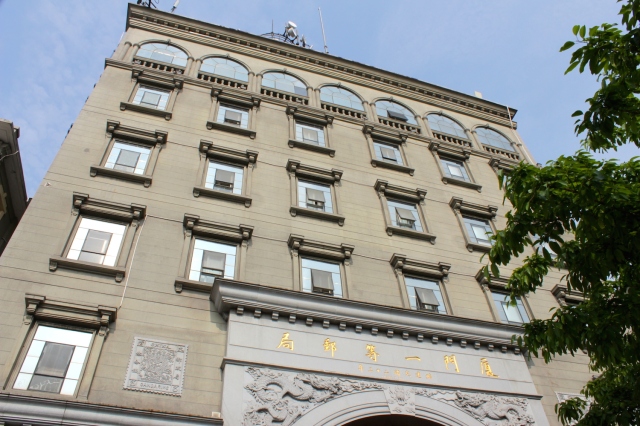 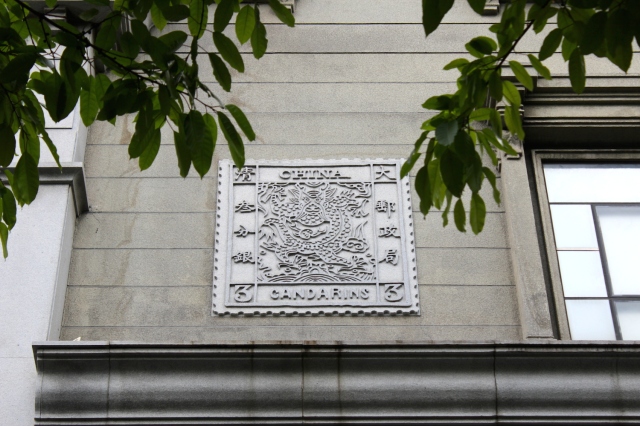 Close-up of His Majesty’s “candarin” stamp, on the General Post Office Facade.

View of part of the Bund from across the street. Bund # 3 is the Xiamen Customs House 廈門海關署 (1909) 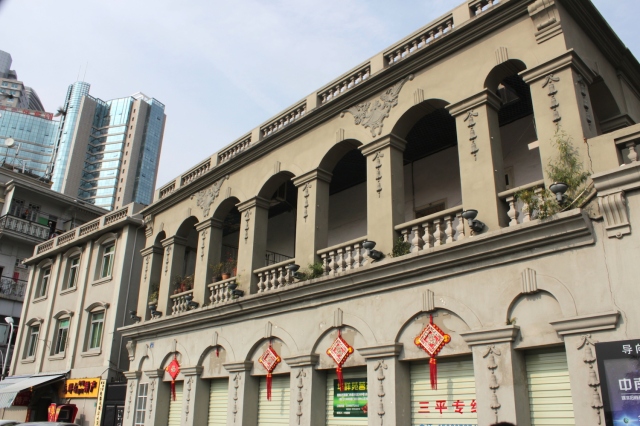 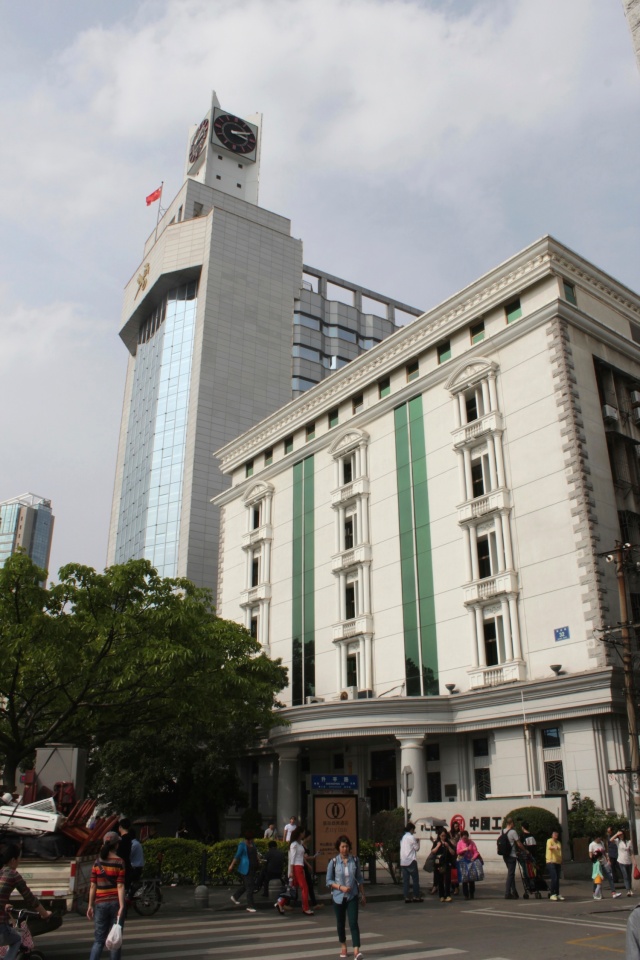 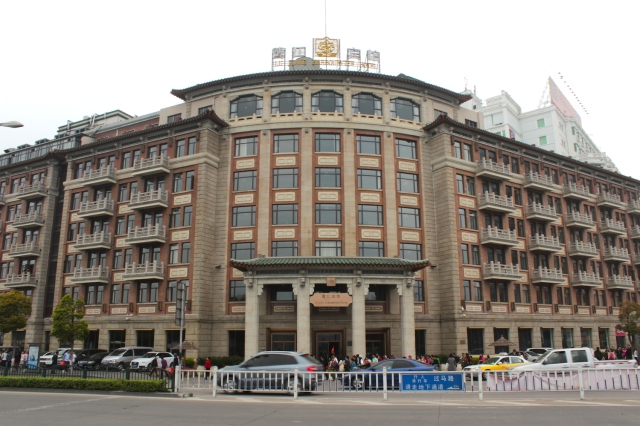 Bund #9 – The Lujiang Hotel, formerly the Lujiang Building, established by Tan Kah Kee in the 1958.

Bund #10, across the street from the Lujiang Hotel

Further down the Bund sits the Foo Sing Hotel 福星旅社, established by a Taiwanese emigre in the 1920s in a distinctly East-West style. To its left stands the Standard Chartered Bank, probably occupying the very spot it used to occupy in the colonial era.

Just behind the imposing facade of the Bund sits the Old Town, the commercial heart of the former treaty port and today’s city; a labyrinthine maze of winding streets flanked by crumbling shophouses and colonial-era mansions.

The central spine of the Old Town is the very recently refurbished Zhongshan Pedestrian Road, which runs just off the Lujiang Hotel, and extends deep into the town.  This section of the old town is off limits to cars, and is exceedingly touristy, notwithstanding the many pretty instances of commercial and shophouse architecture that still exists on the street.

The crumbling, REAL bits of the Old Town, where REAL people live and conduct their REAL day-to-day business – Chinese medicine parlours, hardware stores, Chinese dried foodstuff, street food stalls, etc – occurs just to the left of Zhongshan Road, and is roughly bounded by Zhongshan Road 中山路 to the South, Siming North Road 思明北路 to the East, Xiahe Road 廈禾路 to the North and Lujiang Road 鷺江道 (the main thoroughfare along the waterfront) to the West.

This part of the walking tour first takes the Grand Tourist down Zhongshan Pedestrian Road, where one braves the hordes of domestic tourists taking in the sights.  We then slip off to the side, into the Old City and explore its many winding streets.

The predominant architectural form here is the Traditional Chinese Shophouse, though other kinds of buildings – art deco cinemas, ornate shopping malls and baroque mansions, including one amazing specimen with Moghul cupolas – appear, as if by magic, at random street corners.

In Singapore, there is a street called Amoy Street in the old commercial heart of the city. Unsurprisingly, that street looks very much like the many streets here, in its namesake city.

View down Zhongshan Road towards the Bund. 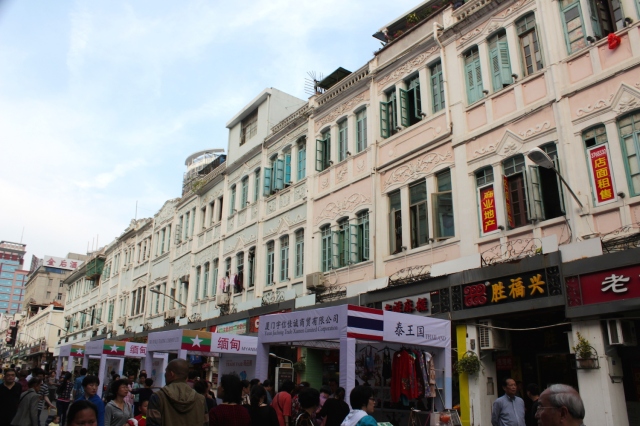 Traditional shophouse architecture at the end of Zhongshan Road. This is something that could have been found in Singapore or Penang.

Off Zhongshand Road, we enter the Old Town proper, with its winding streets and crumbling shophouses. The entire Old Town was probably erected in the early 1900s.

Shot of everyday people living their lives in the Old Town.

Another typical view of the Xiamen Old Town.

Around the Siming Road junction, many fabulous instances of commercial and residential architecture suddenly appear. This mall building stands at an intersection, and recalls Ginza, Tokyo.

The Art Deco Siming Cinema, probably built in the 1930s.

Another instance of commercial architecture – probably a new structure, built to look “colonial.” 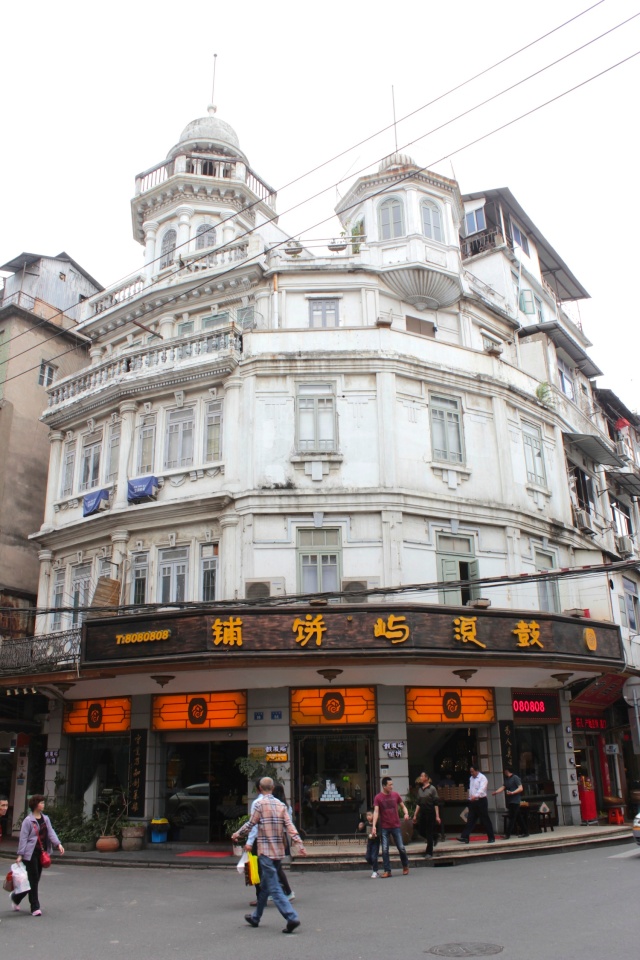 This is the most amazing building in all of the Old Town. It was probably the mansion of a wealthy Chinese (or maybe Indian) resident. It has unique, Victorian-Moghul features in its architecture, and may have been built in the late 1800s. 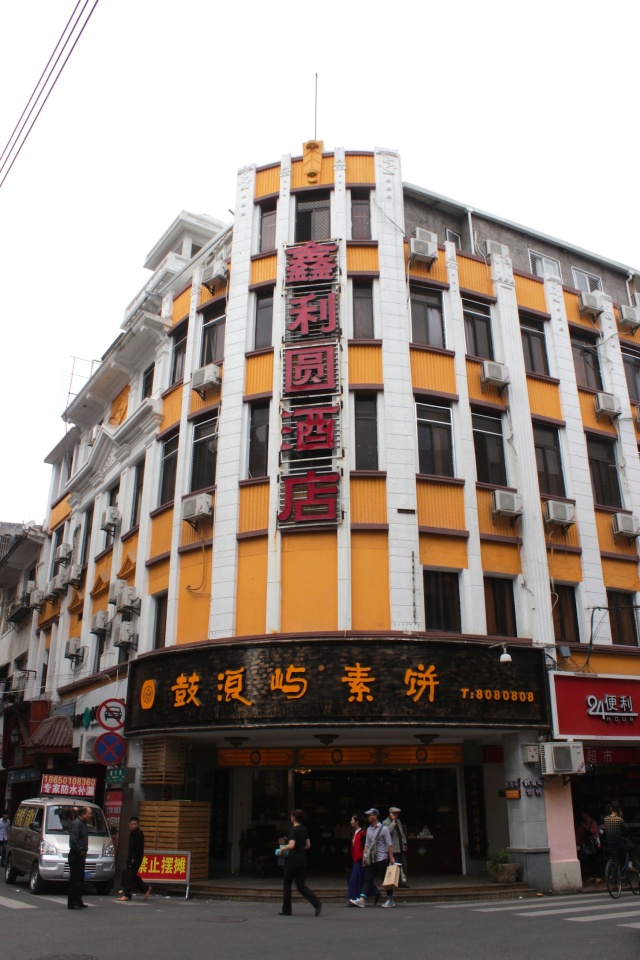 Across the intersection is an Art Deco building.

Another amazing old mansion in an East-West architectural style, this one looking eerily Gaudi-esque.

Examples of shophouse architecture in the Old Town. This one again channels Old Singapore, or Penang today.

A row of crumbling shophouses set against a highrise condominium – showing just how the Old Town itself is changing rapidly. 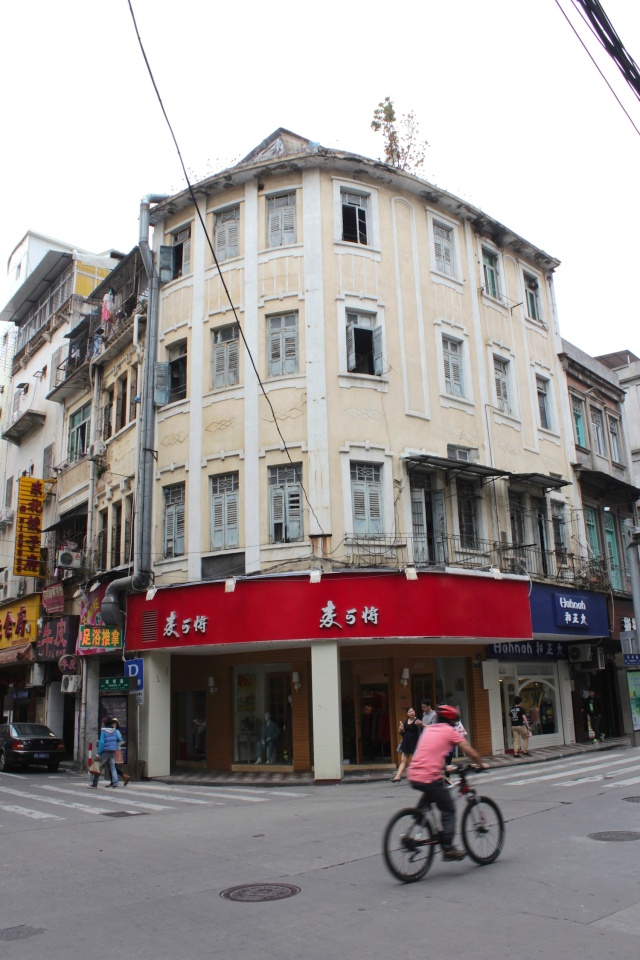 A moment of silence and reflection.

I am a wandering cityophile and pattern-finder who is pathologically incapable of staying in one place for any long period of time. When I do, I see the place from different perspectives, obsessive-compulsively.
View all posts by Kennie Ting →
This entry was posted in Art & Architecture, China, Cities & Regions, Culture & Lifestyle, Landmarks & History, Photography, Sociology & Urban Studies, Travel & Mobility and tagged Amoy, China, 老廈門，廈門，中山路，, Old Amoy, Old Xiamen, Shophouse Architecture, Streets of Xiamen, The Amoy Bund, The Grand Tour, The Grand Tour of the Far East, Xiamen, Zhongshan Road. Bookmark the permalink.

1 Response to Wandering the Streets of the Old Town, Amoy (閒遊老廈門)