Amoy’s links to Singapore (and the Nanyang 南洋 Region) extend beyond cultural ties of the Hokkien peoples that populate both islands today to specific members of the Overseas Chinese community.  And one of the most important members of this community was Mr Tan Kah Kee 陳嘉庚.

Born in 1874 on Xiamen island, Tan Kah Kee is one of the most significant Chinese businessman, philanthropist and educator in recent history, with ties everywhere where there are significant communities of Overseas Chinese.  His legacy was truly global, as evidenced by the many places and buildings named after him in Singapore, China and even in California.

His passion and interest was always for education, and he gave significantly towards the establishment of educational institutions, two of the most famous being Xiamen University 廈門大學 in Xiamen/Amoy, and The Chinese High School 華僑中學  in Singapore.

(Incidentally, my own relationship with Tan Kah Kee runs deep.  The Chinese High School was my alma mater; and at the University of California, Berkeley, my other alma mater, there was also a Tan Kah Kee Hall named in Mr Tan’s honor, and likely funded by his foundation.)

This “Kah Kee” style can be seen in the original campus buildings of Xiamen University; as well as in the Lujiang Hotel 鷺江賓館 on the Amoy Bund, which owes its existence to Tan Kah Kee. (Another well-known example of this form of architecture is the Singapore Chinese Chamber of Commerce Building in Singapore.)

There are two parts to this photo-gallery.  The first explores the unique architecture of Xiamen University and takes a detour through the adjacent Nanputuo Temple 南普陀寺, up into the hills for a panoramic view of the entire university campus.

The second part takes in the venerable Lujiang Harbourview Hotel, established by Tan Kah Kee in 1958, just three years before he passed away.

I stayed at this hotel during my short sojourn in Xiamen, and while it isn’t quite to the four-star standards of other Grand Hotels on this tour – granted, it really wasn’t of the same league or era – I felt a strong sense of place and history here, particularly as I sat out on my balcony – the unique stone balconies being an iconic fixture of the Kah Kee style – overlooking the old Amoy waterfront, and Gulangyu Island in the near distance. 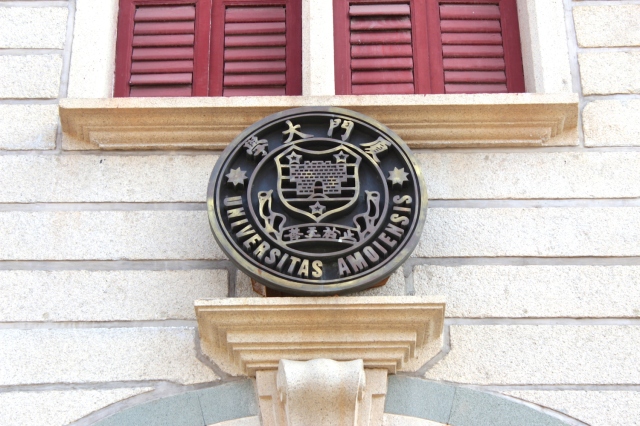 The Kianlam Assembly Hall 建南大會堂 is a fine specimen on the “Kah Kee” style, with soaring Chinese rooves on a palatial foundation.

The Assembly Hall presides over the University’s Olympic-size school-field and running track; which itself echoes the design of The Chinese High School’s main building and schoolfield in Singapore.

View of dormitories that flank the school-field. 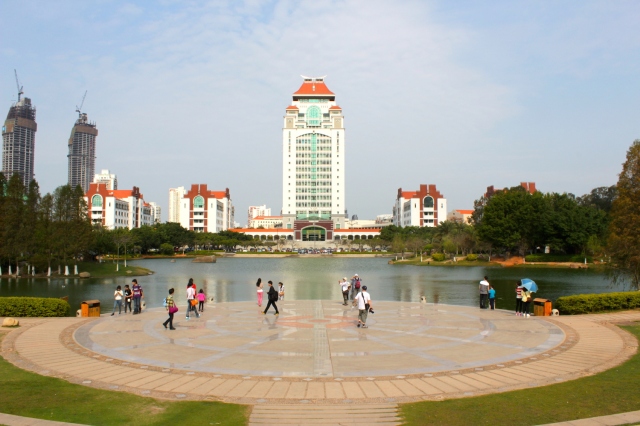 Student dormitories along the Furong Lake are reminiscent of both Hampton Court in London, and pavilions in the Forbidden City, Beijing.

Students leisurely cycling along another campus building from the 1930s.

The entrance to Nanputuo Temple, which sits right beside the Gates to Xiamen University. 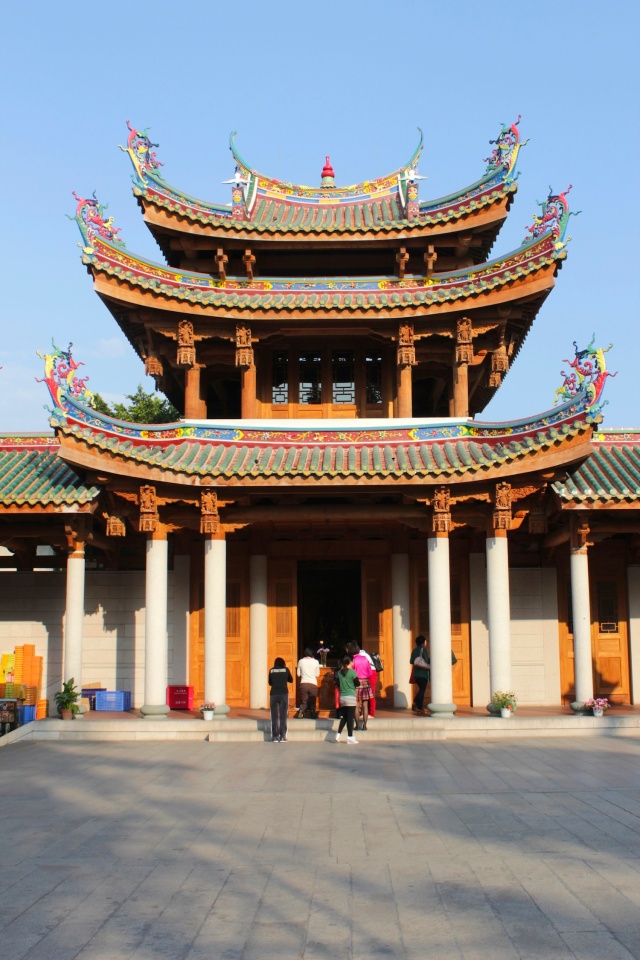 One of the many pavilion and courtyard ensembles in the temple complex.

Panoramic view of Xiamen University to the left and Nanputuo Temple at centre, from atop the hill.

And finally, Xiamen University’s very own beach, which sits at the southern end of the campus. 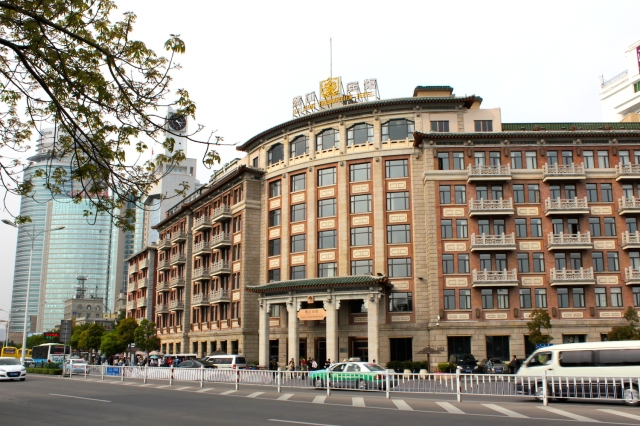 View of the Lujiang Hotel 鷺江賓館 from the waterfront.

Close-up of the entrance to the hotel.

The opulent lobby and reception area.

Close-up of the side view of the Lujiang Hotel, showing the iconic balconies – typical of the “Kah Kee” style.

Having a glass of wine on my balcony overlooking the Amoy Waterfront and Gulangyu Island. 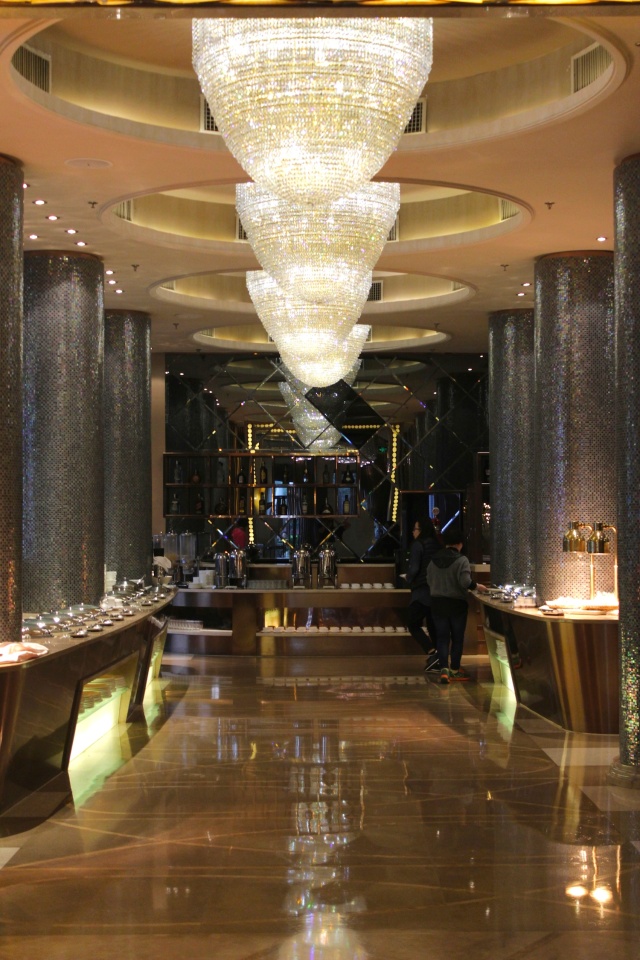 A moment of silence – the tea set in my room. 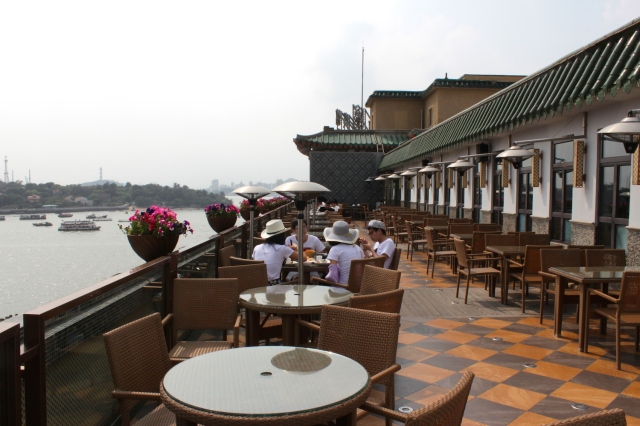 The restaurant’s highly popular roof-top restaurant, serving typical Xiamen and Hokkien dishes (many of which exist also in Singapore); and with a view of Gulangyu Island. 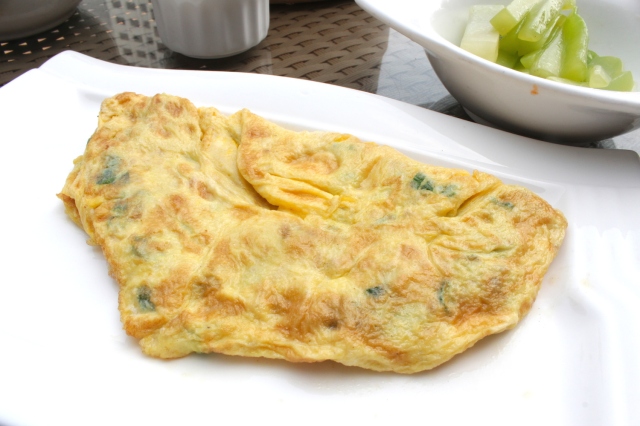 Hir Wan Teng 魚丸湯, or Fishball soup. While the fishball’s look a little more rough-and-ready, the dish itself is also a typical Singaporean dish.

View of the Lujiang Hotel at night.

Finally….The Singapore Chinese Chamber of Commerce and Industry Building was built in 1963, in the Kah Kee Style. Note the distinctive balconies.

I am a wandering cityophile and pattern-finder who is pathologically incapable of staying in one place for any long period of time. When I do, I see the place from different perspectives, obsessive-compulsively.
View all posts by Kennie Ting →
This entry was posted in Art & Architecture, China, Cities & Regions, Culture & Lifestyle, Landmarks & History, Photography, Singapore, Sociology & Urban Studies, Travel & Mobility and tagged Amoy, China, 陳嘉庚，厦门大学，鹭江宾馆, Kah Kee Style, Lujiang Hotel, Tan Kah Kee, The Grand Tour, The Grand Tour of East Asia, Xiamen, Xiamen University. Bookmark the permalink.