The Raffles Hotel – Grand Dame? I’m not so sure.

This was it: the grande dame of not just Singapore, but Southeast Asia.  It was meant to be the glorious climax and culmination of the entire Grand Tour.  But somehow, it fell short, by about a mile.

I think it all boils down to the fact that the “new” Raffles Hotel – the one that was restored and used as the basis of restoration for most of the other Grand Hotels in the region – is now more than 20 years old.  It really is in dire need of a RETHINK.

It’s not the building that needs it though – the Raffles Hotel itself is still immaculate.  Spotless and almost brand new.  The service is also faultless, though a tad on the over-zealous side in the restaurants, as though the service staff were over-compensating.

Which, as a matter of fact, they were.  The restaurants were terrible.  Food was RUBBISH.  Tasteless, textureless, not even fresh in some instances.  My breakfast dhal curry in the historic Tiffin Room was more like “dull” curry.  I mean, I had never had anything so insipid and bland in Singapore. And the buffet dinner in the Bar and Billiard was the worst I’ve had all year – I doubt the freshness of the ingredients.  And that is a serious accusation.

It would all have been forgiven if the Hotel itself felt like it was bustling and alive.  But outside of the Long Bar – which is now a theme bar in a theme park, really – the premises of the hotel itself were DEAD.  I get it though – luxury, privacy, exclusiveness.  But really, the entire experience felt like I was being in a MORGUE.  And this is totally not how the Raffles Hotel was traditionally like.  It used to be the toast of the town – bustling, busy, filled to the rafters with people.  These days, its SOUL-LESS, in more ways than one.

Part of the problem is that it no longer even tries to endear itself to Singapore and Singaporeans anymore.  A few years back it was still doing so.  But perhaps after it had been acquired by foreign investors – YES, it NO LONGER belongs to Singapore! – it no longer felt the need to fit in.

Well, it’s too bad.  I’m sure it still makes tons of money from its mall, and from the ridiculous room rates.  But for that price, I’d say any of the other TEN Grand Hotels in the region over a much better experience, whether it is in terms of authenticity, service, ambience, or MOST IMPORTANTLY (at least to me), food. And most of the other Grand Hotels also probably score more points (ironically) in the ENDEARMENT department.

In short: I’m SORELY DISAPPOINTED.  Time to keep up and stop resting on your laurels, Raffles! The Messrs Sarkies wouldn’t be pleased.

Patronised by Royalty and Nobility 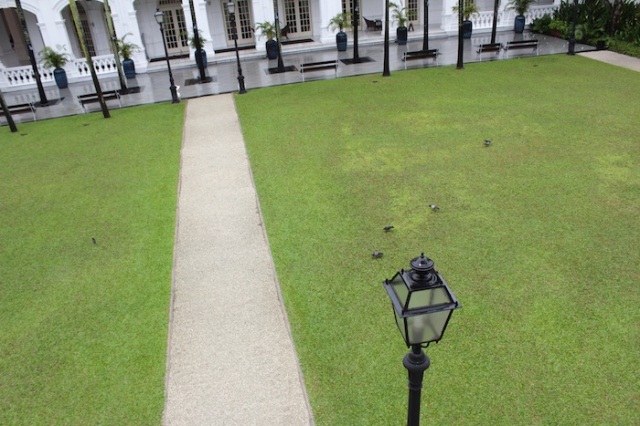 Dhal curry, or rather “dull” curry. Exquisitely presented but soul-less 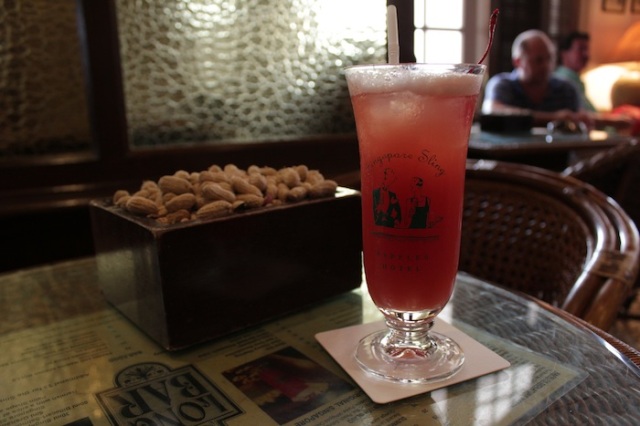 The Long Bar – like one of the many theme bars in Universal Studios.

I am a wandering cityophile and pattern-finder who is pathologically incapable of staying in one place for any long period of time. When I do, I see the place from different perspectives, obsessive-compulsively.
View all posts by Kennie Ting →
This entry was posted in Art & Architecture, Culture & Lifestyle, Home, Landmarks & History, Photography, Singapore, Travel & Mobility and tagged Dead, Disappointed, Morgue, Rubbish, Singapore, soul-less, The Grand Tour, The Grand Tour of Southeast Asia, The Raffles Hotel. Bookmark the permalink.