The exterior of Majestic Hotel

Malacca doesn’t have a Grand Hotel per se, but it does have Majestic Hotel, which is almost as historic, and has been recently refurbished so it recalls these other Grand Hotels in the region.

The “peranakan” or mixed architecture of the Hotel mirrors the nature of Malacca itself – its spacious front verandah is a typical feature of Dutch Indies-style bungalows; its beautiful Porcelain-tiled floors hail from Nonya Chinese houses, and are closely tied to city’s Portuguese roots.  Finally, the rooms themselves are done up in the style of a Grand-Tour era British gentleman’s room.

Unfortunately, the hotel is surrounded by a massive construction site, as city authorities aim to transform the vicinity into an equivalent of Clark Quay in Singapore, and Straits Quay in Penang.  As such, walking out of the hotel is like walking into a warzone.

That said, there are still moments of tranquility to be had, particularly in the beautiful front lobby, and in the awkwardly placed but very adequate swimming pool. 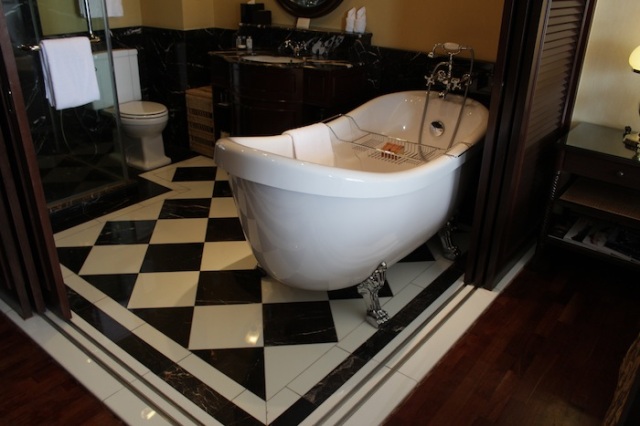 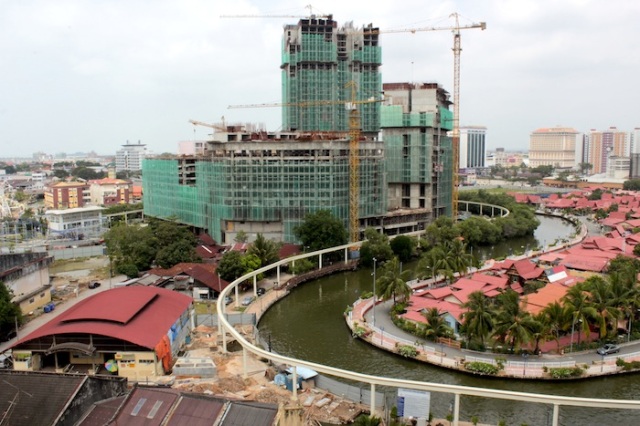 View from my room – a massive construction site

The hotel pool and gym

I am a wandering cityophile and pattern-finder who is pathologically incapable of staying in one place for any long period of time. When I do, I see the place from different perspectives, obsessive-compulsively.
View all posts by Kennie Ting →
This entry was posted in Art & Architecture, Cities & Regions, Culture & Lifestyle, Landmarks & History, Literature & Philosophy, Photography, Travel & Mobility and tagged Majestic Hotel, Malacca, Malaysia, Rumah Peranakan, The Grand Tour, The Grand Tour of Southeast Asia. Bookmark the permalink.