Portrait of the late King Norodom Sihanouk, symbol of Cambodia and Phnom Penh.

“[A]lready all we have built in Phnom Penh appears old under the effects of the burning sun; the fine, straight streets we have constructed are devoid of any human presence and overgrown with grass; one could believe that this is one of our old colonies whose charm is found in their desuetude and silence.”  Pierre Loti, An Angkor Pilgrim

There he was again, set within a gold frame along the side of a major thoroughfare.  A black and white garland encircled his features, and a royal gold umbrella shielded him from the noonday sun.  He looked calm and benevolent, every bit the Father of his Nation.  The cars and motorbikes of his now modern capital city zipped by as he watched, beaming.  A passer-by bowed her head in respect, and he seemed to smile in acknowledgement.  Just a week before, he had passed away of a heart attack at the grand old age of 89.  I had arrived to find an entire city in mourning.

The modern history of Phnom Penh is inextricably linked to the life and times of King Norodom Sihanouk, the fifth of his line and the most frustratingly mercurial of all Asia’s monarchs.  Just consider his official titles: between his assuming the throne and his death, he had served two terms as King (abdicating once in favor of his father in 1955, and a second time in favor of his son in 2004), two as Sovereign Prince, one as President, six separate brief terms as prime minister, and once as King Father. During the time, Cambodia went from French Protectorate to Constitutional Monarchy, to Khmer Republic to Democratic Kampuchea, to a Communist People’s Republic and back to the Kingdom that it is today. 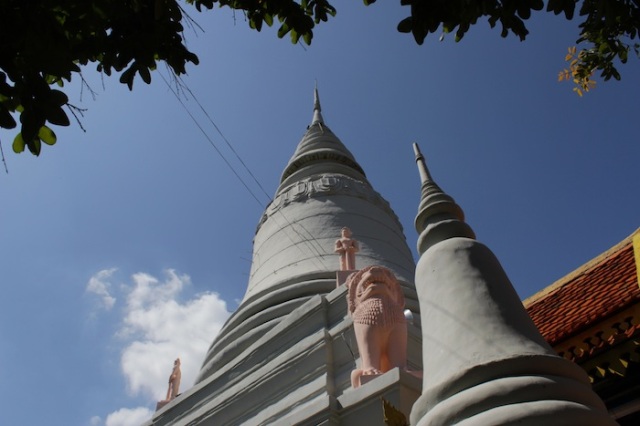 Wat Phnom, the temple mount after which the city is named.

The reputed English translation of a Chinese curse goes: “May you live in interesting times.”  The history of Cambodia, and in particular that of its capital city Phnom Penh would seem to epitomise “interesting.”  It wasn’t so long ago, for example, that the Khmer Rouge was in power, and Phnom Penh the site of one of the worst genocides in history. A full two million Cambodians, or one quarter of the entire population died in just over three years. One of Phnom Penh’s suburbs plays host to a rather nondescript school building, in which Pol Pot – the leader of the Khmer Rouge – had systematically tortured and killed more than 17000 of his own people. Today, it is a poorly maintained genocide museum commemorating that terrifying part of history.  If that isn’t enough horror, drive a little further out of town to the village of Choeung Ek and there one will find the notorious Killing Fields, mass graves where supposed dissidents were executed by a blow to the head, and buried in the thousands.  These dissidents were no guerillas or revolutionaries but ordinary people who just so happened to be educated or religious – teachers, academics, intellectuals, artists, museum curators, and even monks.

The city today however, seems determined to put its grisly past behind and to get a move on with its life. Certainly, when I visited, I found Phnom Penh far less disorganised and depressed (both economically and psychologically) than I would have expected.  In fact, the city was quite positively buzzing with energy and dynamism.  True, one can’t expect to do more than skim the surface on a three-day weekend hop-over.  But the fact remains: Phnom Penh was, or is a fascinatingly charming city.  In fact, it is quite possibly the most charming city I have visited on my Grand Tour thus far.  The marketing banners festooning the city centre, proclaiming “Charming City,” or “Charmante Ville” (depending on where you looked) were spot on.

For starters, I never once felt like I was under threat while taking to the streets on my own in the daytime.  Despite advisories warning against walking in the city –“the streets are congested,” “the touristy areas infested with touts,” “beware motorcycle snatch thieves”– I found exploring the streets of Phnom Penh relatively easy.  Admittedly, the pavements were in dire need of maintenance and were being used for every other purpose than walking (motorcycle parking, chicken rearing, outdoor barbering and restaurant seating, for example), but the serendipity of it all was rather delightful.  One never knew what to expect.

The very human scale and feel of Phnom Penh: 1960s apartments in the background and a market in the foreground.

Phnom Penhers were also a warm, friendly, and welcoming bunch.  There is none of that desperation one feels keenly in far richer cities like Bangkok or Kuala Lumpur. You smile when they offer you a ride on their tuk-tuk or motorcycle taxi.  Say “no” very politely.  And all they do, generally, is smile back, ask you where you’re from and wish you a great day.  And when you actually take a tuk-tuk or motorcycle taxi, the prices always felt, well… fair. Or perhaps it would be more appropriate to say that I knew I was being charged the “tourist rate,” but it didn’t ever seem exorbitant or unreasonable.  There was a certain graciousness and charm that made the city feel very human; manageable and down-to-earth.

And then there was the architecture, which was quite splendid, whatever the naysayers say.  I came to the city expecting French colonial and art deco buildings supposedly crumbling and unrecognisable beneath decades of grime and neglect.  There was very little of the kind.  Throughout the city centre there were charming four to five storey apartment buildings built in the 60s that were ebulliently occupied (for lack of a better way adjective), painted in a riot of colours and bursting with activity. Neither were the French colonial buildings “crumbling.”  True, quite a few of them had seen better days and many others had probably been demolished to give way to more modern buildings.  But along the main thoroughfares – such as Norodom and Sihanouk Boulevards, there were still dozens of glorious villas, now occupied by municipal government offices or foreign embassies. Many of the side streets off these major boulevards also sported lovely cafes, restaurants and boutiques housed in colonial-era shophouses of the five-foot-way variety found all over Southeast Asia. It was hard to deny that Phnom Penh might actually be recovering some of its past glory in the 50s and 60s, a golden age when it was regarded as a Paris of the East.

The Independence Monument, built in Cambodian’s golden age in the ‘50s and ‘60s by the Cambodiam architect, Van Molyann. It channels the temples of Angkor.

That golden age is known fondly by locals as “Sihanouk Time,” bringing us back to the titular character of our short narrative. It was a time when Cambodians felt proud of their city; when being Cambodian meant being the direct descendants of the great Khmer civilization of Angkor, of which the temples of Angkor Wat – the biggest religious building ever built in the world – were a most important symbol. Not that I’m romanticising this period of course: there was still rampant corruption and ubiquitous poverty.  Sihanouk was also closer to dictator than benevolent, often considering his nation and all the people within it his children, summoning them at short notice to do the most banal things like march in processions, or attend his lavish palace dinners.  The golden age was in truth, a product of nostalgia rather than a description of reality.

View of Phnom Penh from the Ton Le Sap River.

Which, however, doesn’t detract from the fact that Cambodia is, or may be (to be hopeful but not too expectant) experiencing another Golden Age, or “Sihanouk Time,” this time with His Royal Majesty’s passing signaling the end of an era and the beginning of the next.  It certainly looked that way to me the last evening of my trip, when I booked a private boat tour down the Ton Le Sap river and witnessed, by the light of the evening sun, Cambodians out en masse, filling the tables at outdoor restaurants by the riverside, enjoying the cool evening breeze along the Corniche, and looking like they were having a really good time.

I do hope, for once, that these good times last. The city and its people deserve it.

I am a wandering cityophile and pattern-finder who is pathologically incapable of staying in one place for any long period of time. When I do, I see the place from different perspectives, obsessive-compulsively.
View all posts by Kennie Ting →
This entry was posted in Art & Architecture, Cities & Regions, Culture & Lifestyle, Landmarks & History, Literature & Philosophy, Photography, Travel & Mobility and tagged Cambodia, Cambodian History, Charmante Ville, Phnom Penh, Sihanouk Time, The Grand Tour, The Grand Tour of Southeast Asia, Ton Le Sap. Bookmark the permalink.