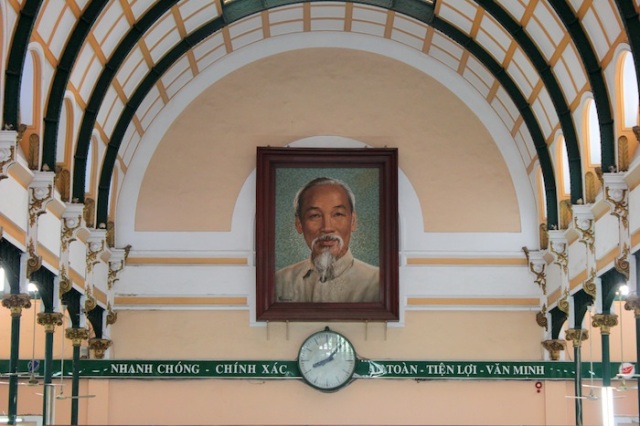 “I’ve known you for years. Everyone says you were beautiful when you were young, but I want to tell you I think you’re more beautiful now than then. Rather than your face as a young woman, I prefer your face as it is now. Ravaged.” – Marguerite Duras, The Lover

A Touch of the Blues

So here’s a portrait of the man himself, prominently displayed in the General Post Office Building of the city that is named after him.  He appears to be happy, or at least content. He is smiling enigmatically, like a latter-day Mona Lisa, though unlike Ms Lisa, this smile is more of a smirk; an I know something you don’t know sort of expression. I am forced to ask: what does he know exactly that I don’t?  Because I’m not getting it. I’m not getting this whole clattering, discombobulated city of his, named after him.

Where in the world is the Saigon I came all this way to see? Where is the Saigon of beautiful women in conical hats and pastel-shaded ao dais, cycling leisurely to the markets?  Where is the voluptuous, nubile, brazen harlot of a city in Marguerite Duras’ The Lover? 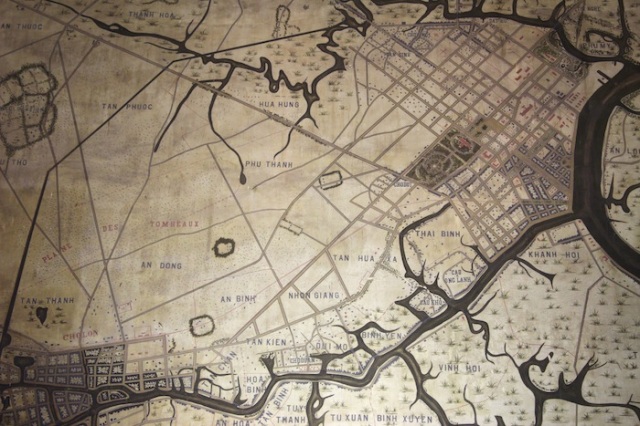 Colonial map of Old Saigon, with the city to the right, and the satellite town of Cholon – Saigon’s Chinatown – to the left.

These were the thoughts that coursed through my mind as I sat on a bench, contemplating an immense portrait of Comrade Ho hanging in the magnificently over-the-top neoclassical French-colonial General Post Office Building that sits in Paris Square, Ho Chi Minh City, or, in local terms, Công xã Paris, however one pronounces that in the unintelligible and opaque French Latin script used to transcribe a wonderfully melodic and infinitely more complex language (than French)[1].  Around me, I was quite literally swamped by locals, coming here to noisily purchase postal services – the place still miraculously functions as a general post office – or to just noisily take up space in an already crowded public building.  Noise appears to be the thing in Ho Chi Minh City.  That, and motorcycles, which in turn create an abundance of noise. Outside, Công xã Paris bears no resemblance to Paris at all, over-run, as it were, by thousands and thousands of these lemming-like mopeds rushing off to the edge of some proverbial cliff. At the centre of Công xã Paris, impervious to it all, sits the gothic Notre-Dame de Saigon, channeling the Ile-de-France and looking completely out-of-place. The Vietnamese don’t seem much bothered by it however. From my vantage point, I noted at least two wedding couples trudging heroically through the sweltering heat in tux and gown to take their wedding shots in the shadow of the hideous, salmon-pink French monstrosity. 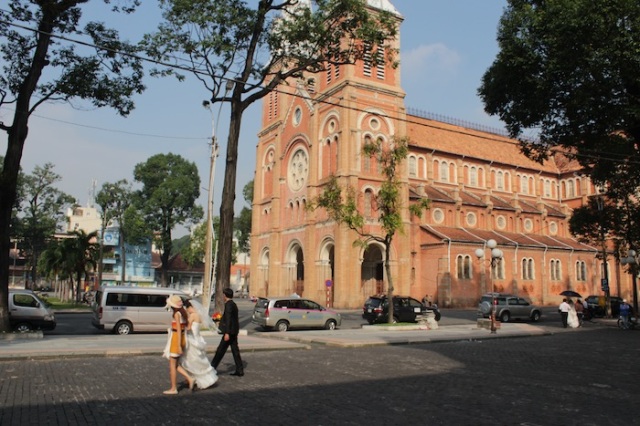 Saigon is probably one of the most notorious of all the cities in Southeast Asia.  Everyone’s heard of it and everyone knows which country it belongs to. Reams and reams of text have been written on the city and dozens of epic dramas set in it. Many of these have been transferred from page to stage or screen and the ensuing products have gone on to win Tonys, Oscars, Cesars, Emmys and the like. There’s even been a West End Musical – massively successful and profitable in the ‘90s – inspired by events that took place in the city during the Vietnam War.  Therein, however, lies one of the main problems about Saigon’s recent history and reputation, literary and popular: it is indelibly and inconveniently linked to that of the Vietnam War.  It is almost impossible to detach Saigon from the Fall of Saigon; to isolate the old French Colonial City, once known as the Pearl of the Far East, from the basket of ruined hopes that this 300-year old place became in just a brief two decades between 1955 to 1975.  Three decades after the War ended, I’m still feeling them Saigon blues. 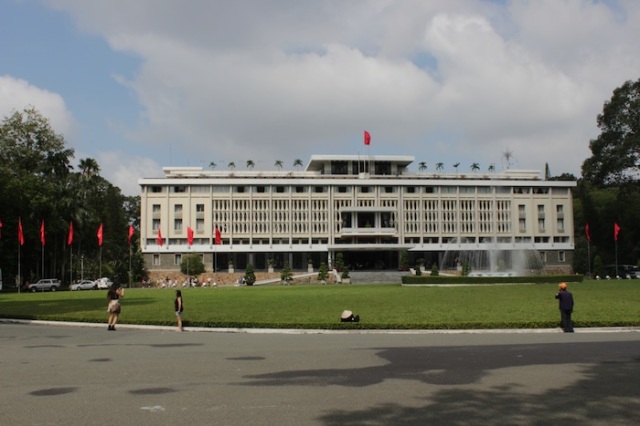 Here’s a shot of The Symbol of Our Subjugation, for old times’ sake.

I came to Saigon – let’s just call it that for now – determined to adopt a decidedly anti-war approach to my tour of the city; as in, I would studiedly avoid any attraction in the city that was related to the War, and attempt to tap into the essence of the French City that existed before the Americans and Russians came round to screw it up[2].  I might as well have tried to avoid seawater in the Pacific Ocean. Just when I thought I had found one museum (the Fine Arts Museum) that would appear to have little to do with post-war guilt-tripping – voila! – there’s an entire section dedicated to that sole purpose.  The city’s most visited attractions are irretrievably associated with the War.  The two most visited of these are the Reunification Palace – where Comrade Ho’s Vietminh ended the War in 1975 by driving a tank into the palace façade and absorbing South Vietnam forcibly into Communist North Vietnam – and the War Remnants Museum, where for a minimal fee, one can admire deformed foetuses, decommissioned ammunitions, and read in garish detail, the hundreds of unforgivable atrocities the Americans committed on the Vietnamese, as though the North Vietnamese themselves were guiltless.  It’s a strange way to promote tourism, but it appears to be succeeding. The Reunification Palace at least, was thronged with Vietnamese and Americans, happily snapping away at the symbol of the City’s subjugation. 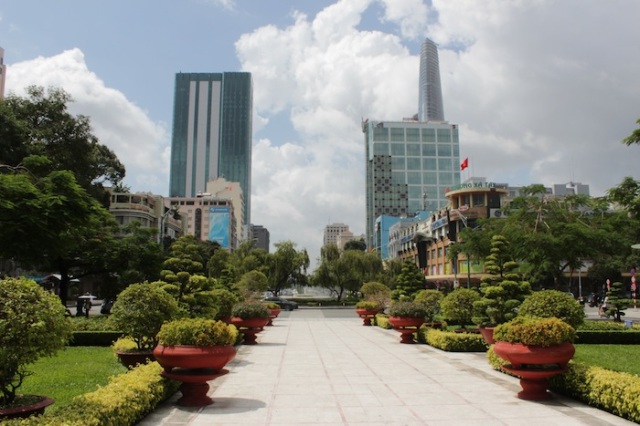 Elsewhere, the old French City is slowly but surely being eradicated by the relentless onslaught of yet another Western European power – Capitalism.  Whole blocks of French colonial villas and public buildings have been demolished for the construction of such towering hulks of nondescriptness like the Bitexco Towers – the tallest building in the city; and the Vincom Towers, the city’s most luxurious mall.

I get it though.  I really do. The City has moved on. It wishes to turn away from its ignominious past and pursue a more “normal” course of development that other cities in the region, notably Singapore, started on decades ago.  It really wishes not to be Saigon, but to be Ho Chi Minh City: just any other modern, everyday humdrum sort of place.  Well then, I have to counter, was the War not then a complete waste of time?  Was all that sturm, drang und tod really necessary when the Communist Ideology it was unleashed to protect has been supplanted after all?  Did the Communist North really, actually lose the War in the end?  But I’m being unfairly disingenuous. 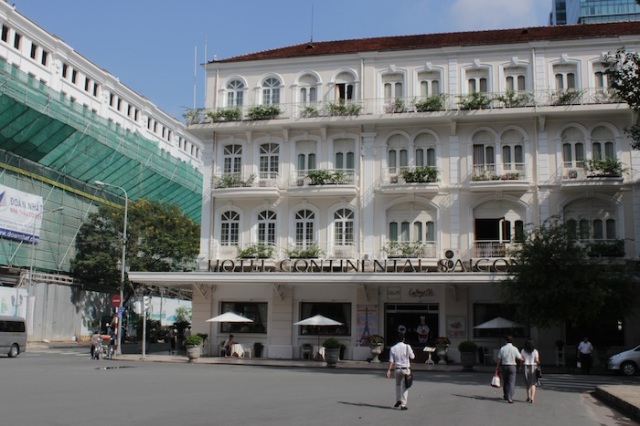 The legendary Hotel Continental Saigon, beside the to-be-unveiled new Eden Center, thankfully designed to blend in with the colonial architecture of its surroundings.

I spent the afternoon sipping tea at the outdoor terrace of the legendary Hotel Continental (1880), pondering these indelicate thoughts of mine.  The Continental is the oldest and most legendary hotel in Saigon, situated on the most celebrated street in its time – Rue Catinat, now bombastically known as Đường Đồng Khởi, or Total Uprising Street. During the War, it was the centre of political intrigue, accommodating heads of state, spies, journalists and writers. Graham Greene stayed in a suite here, and set entire scenes in his book, The Quiet American, on Rue Catinat.  Somerset Maugham too, resided here and described how agreeable it was to sit in the exact same spot I sat in, having an innocent drink before reading about heated affairs in the local papers. Even then, it seemed, Saigon was brewing with resentment, far from a Far Eastern idyll.

The Continental is one of the few colonial-era landmarks that still largely stands in its original form. Across the street sits the beautifully restored Opera House, now a Municipal Theatre. Within five minutes walking distance stand the landmark Rex (1961) and Caravelle Hotels (1959), built in the late ‘50s, and infamous for playing host to American G.I.s during the War.  Further along Đồng Khởi Street towards the Saigon River are a further two legendary hotels – the Grand Hotel (1930) and the Majestic Hotel (1925)[3].  The rest of the street, however, is a battleground on which Capitalism appears to be waging a winning war: one regards a landscape of construction and re-development, spanking-new buildings, the airbrushed visages of the likes of Gwyneth Paltrow and Scarlett Johannsen, and the serpentine logos of Dior, Louis Vuitton and Chanel.  It is a chilling reminder that old Saigon is once again being subjected to a joint French and American onslaught, but this time the Saigonese are running towards rather than running away. 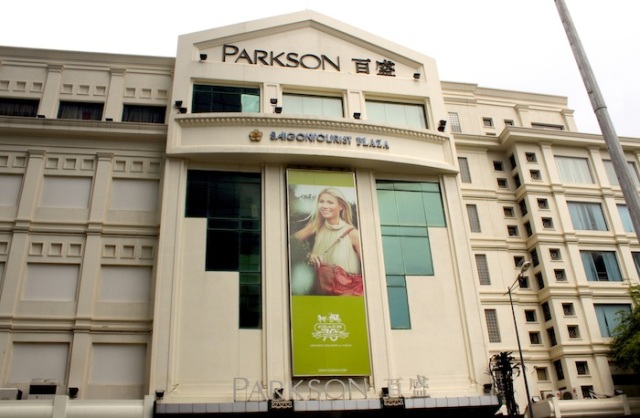 Hang on. I’ve already established some paragraphs back that this isn’t Saigon that I’m in. This is Ho Chi Minh City. I have still yet to find traces of Saigon in this town; yet to decipher the old man’s smile.  Gwyneth’s is eminently more transparent.

[1] The latinisation of the Vietnamese language was a grave crime against humanity; an act of cultural genocide that rid the Vietnamese of any connection to their traditional literature and history.

[2] The French pretty much created the city, so there wasn’t much of it to screw up before they arrived.

[3] All of these hotels, save the Continental and the Majestic have had multi-storeyed towers clumsily added onto the existing buildings to double or triple the number of rooms offered.  The Majestic is also slated to undergo such a dubious enhancement, though there was no sign of any progress on this when I stayed there.

I am a wandering cityophile and pattern-finder who is pathologically incapable of staying in one place for any long period of time. When I do, I see the place from different perspectives, obsessive-compulsively.
View all posts by Kennie Ting →
This entry was posted in Art & Architecture, Cities & Regions, Landmarks & History, Photography, Travel & Mobility and tagged Ho Chi Minh City, Hotel Majestic, Saigon, Searching for Saigon, The Grand Tour, The Grand Tour of Southeast Asia. Bookmark the permalink.