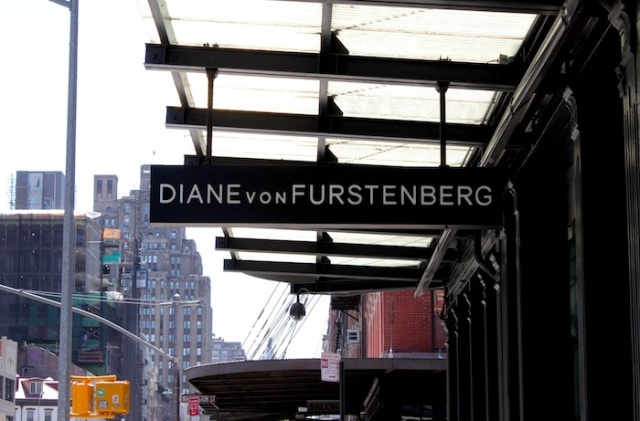 45 – The Altar of the High Priestess herself, in an 1887 building previously housing the Gachot & Gachot Meatpacking Company.

9th to 11th Avenue plays host to what is now only nominally known as the Meatpacking District.  Up until the late ‘90s, this area packed in meat of two different kinds.  For almost a century, it contained the city’s largest cluster of butchers and wholesale meat companies. From the late 1970s, it also began to play host to the city’s most notorious sex clubs, catering almost exclusively to a gay clientele.

These days, the District has cleaned up entirely and has become a sort of Temple Complex dedicated to Designer Fashion (D/F) boutiques catering to yuppies and tourists. Where before, there were establishments like The Anvil, The Manhole, The Mineshaft and The Toilet, now we have Stella McCartney, Hugo Boss, Alexander McQueen, and the High Priestess of Fashion herself: Diane von Furstenberg, her sacred cartouches – incidentally, also spelled “D/F” – emblazoned prominently across the complex, and worshipped by adoring pilgrims who come from afar.

Many of these pilgrims arrive at the Complex via a Sacred Processional Way, also known as the High Line Park, reverently designed and landscaped to within an inch of its life, and presiding over a post-industrial landscape that is now almost completely devoid of any context or link to its blue-collar past.

Crossing under the High Line to the Hudson River waterfront, one is reminded of this precinct’s more humble beginnings by a stark industrial landscape that still persists, as well as an equally stark view of New Jersey across the water.  Here, atop the Department of Sanitation’s waterfront facilities, a lone Stars and Stripes flutters in the wind, putting one in a contemplative mood as one completes a walking tour of 14th Street, and a journey through the State of the American Union today.

43 – Junction of 9th Ave: effigy of a Greek god atop an 1880s building that used to house the gay sex club, The Toilet.

46 – Sacrificial offering to the High Priestess, in a ritual “pose.” To the left is a 3-storey warehouse dating to 1900. 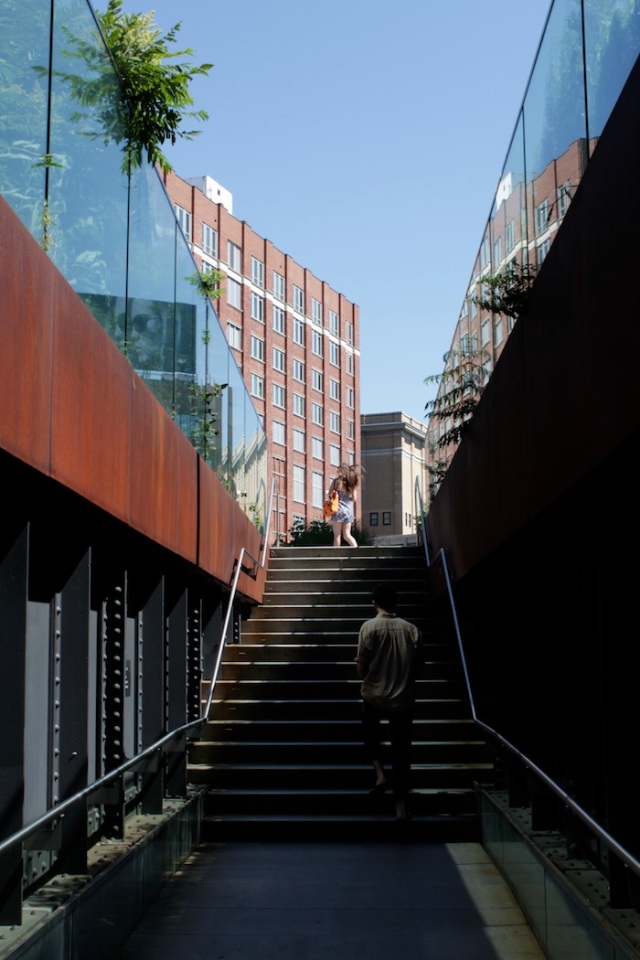 48 – The Sacred Approach up to the High Line Park, where one may view the D/F Temple Complex from up high.

49 – Pilgrims and worshippers at the D/F Temple Complex. The sacred cartouche is visible to the left.

50 – And finally, a lone American flag fluttering above the Department of Sanitation, reminding us of the fragile balance that is the State of the American Union.

I am a wandering cityophile and pattern-finder who is pathologically incapable of staying in one place for any long period of time. When I do, I see the place from different perspectives, obsessive-compulsively.
View all posts by Kennie Ting →
This entry was posted in Art & Architecture, Culture & Lifestyle, Landmarks & History, New York, Photography and tagged 14th St, D/F, Manhattan, Manhattan in 12 Streets, Meatpacking District, New York, State of the Union or Swinging Both Ways. Bookmark the permalink.