And so 2011 ends.  But my year of being in-between homes is hardly over.

Let me explain this convoluted state of mind.

Just two days ago, I finished reading a book by (Egyptian-)American writer André Aciman, titled Alibis – Essays on Elsewhere. A friend in New York had recommended it to me because he thought the book’s themes of place, home, wandering and exile would resonate with me. He was not wrong.  I have been just floating for most of my life and I’m trying to understand why I can’t seem to anchor myself.

I thought I’d extract my favorite paragraph in the book (occurring in the “Afterword”), which, I felt, contained the seed of the answer to my question.

“When, a few months later, the time came for me to go to Paris, I called her again and said that much as I loved Paris I did not enjoy traveling. Besides, I never found Paris relaxing, I would much rather stay in New York and imagine having wonderful dinners in Paris. ‘Yes, of course,’ she agreed, already annoyed. ‘Since you’re going to Paris, you don’t want to go to Paris. But if you were staying in New York, you’d want to be in Paris. But since you’re not staying, but going, just do me a favor.’ Exasperation bristled in her voice. ‘When you’re in Paris, think of yourself in New York longing for Paris, and everything will be fine.”  (pg. 193)

It’s funny how our imaginations and desires are often so much more real than the real thing. In the three years leading up to my move to London / New York, I had created a rather unique (and idiosyncratic) persona and lifestyle for myself in Singapore.  If you had stepped into my apartment, and spent a couple of days with me, you would have probably thought you were in some kind of recreation-Italian country house in a New York brownstone.

I remember the wonderful dinner parties I would conjure up for American and European friends and neighbours on weekend evenings.  I remember the American-style brunches the next morning, when I would dive into my two eggs sunny-side up with a splitting hangover.  I remember listening to the latest Broadway and Off-Broadway musical soundtracks (courtesy of Amazon.com) and being “in the know” about the big art exhibitions in New York (courtesy of TimeOut.com). I remember Christmas dinners with turkey, brussels sprouts and jazz standards by Louis, Billie, Ella.

In all respects, I could have been an American in New York.  Except I was a Singaporean in Singapore imagining myself leading what I thought was a New York lifestyle in an ersatz New York within the hermetically-sealed confines of my apartment, my social circle, and my deluded mind.

But why this elaborate charade? Because Singapore was so spiritually and creatively bankrupt, I convinced myself. Because it was boring. Because there was no space for individual expression, and people didn’t have opinions. That was harsh and uncalled for. Where I should have been looking within, I tried to justify my own inactivity by blaming my environment.

When I made the decision to move away from Singapore, it was with a fierce determination and optimism.  In London and New York, I could finally fulfill my potential!  They would welcome me with open arms!

I found out, naturally – and this is perhaps the most significant learning point this year – that the reality in New York (and in London) paled in comparison to my distorted imaginings. For one, the kind of lifestyle that I used to have in Singapore I could only imagine having in New York due to the immense difference in costs of living and tax regimes. I was also quickly disabused of the notion that skillsets acquired at my previous job were transferable, halfway across the globe.

I realised, inevitably, that the life I had led in Singapore was not New York Living at all, but really Singapore Living, unique and unreproducible elsewhere.  And that it had been a charmed way of living akin to a beautiful dream!

This dreaming of elsewhere is, I believe, a variation on the proverbial “grass is always greener.”  While in Place A, one dreams of Place B because one believes in its inherent better-ness. This dream becomes so vivid as to be irresistible: one travels to the real place.  But when at Place B, one realises the truth, that the Place B in one’s dreams, is really Place B1 – an alternative Place B existing in a parallel universe, having nothing whatsoever to do with Place B at all.  One then realises that the aspects one appreciated the most in Place B1, were really aspects of Place A, after all.

So yeah… forget New York, for now.  Give me my evenings in Singapore dreaming of and even simulating New York.  If, or when, I do eventually return to Singapore, I shall make sure that whenever I feel like complaining, I’ll remember myself this evening in New York, imagining myself in Singapore pretending to be in New York. 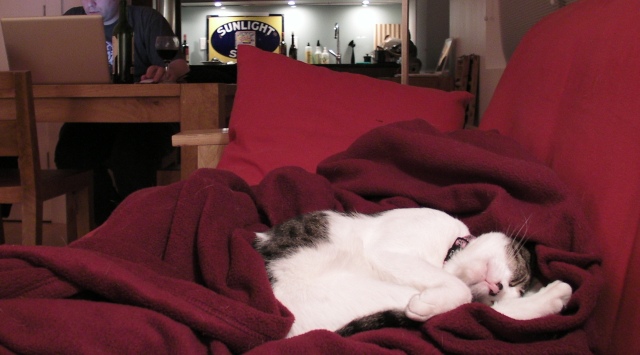 I am a wandering cityophile and pattern-finder who is pathologically incapable of staying in one place for any long period of time. When I do, I see the place from different perspectives, obsessive-compulsively.
View all posts by Kennie Ting →
This entry was posted in Home, Literature & Philosophy, New York, Singapore, Travel & Mobility and tagged Alibis - Essays on Elsewhere, Andre Aciman, Dreaming of Elsewhere, Grass is Greener, New York, Singapore. Bookmark the permalink.