The Lahore Fort and Badshahi Masjid

The Badshahi Mosque, built during the reign of the Emperor Aurangzeb and completed in 1673, was the largest mosque in the world until 1986.

The Lahore Fort, also known as the Shahi Qila, or Royal Fort, is the third of the major Mughal Forts in its capitals, the other two being in Delhi and Agra. It is the most important historic site in Lahore.

Like the city itself, the Fort today is an accumulation of different layers of history – the Mughal Emperors have each made their mark on the fabric of the Fort, as did the Sikh and ensuing British Empires, as well as independent Pakistan.

View of the Lahore Fort Complex, showing the multiple layers of architecture. The Fort Ramparts are at the Foreground. Behind them stand the Samadhi of Ranjeet Singh, and further behind, a minaret and the domes of the Badshahi Mosque.

The earlier sections of the Fort still standing were those built during the reign of the Mughal Emperor Akbar – the Akbar Quadrangle is today one of the last segments of the Fort the visitor would experience, before stepping out. Here stands the enigmatic Hall of Red Sandstone, once possibly part of the Palace Akbar built here, which is today in ruins. Here stand also the Lal Burj and West and East dalans, with their red sandstone pillars betraying Hindu ornamentation, and reminiscent of Akbar’s city of Fatehpur Sikri.

The Emperor Jahangir, who, together with his Empress Nur Jahan, loved Lahore the most, built his own quandrangle, centred around the Bari Khwabgah, which was Jahangir’s Sleeping Quarters. This structure has been largely reconstructed during the British era. Jahangir was responsible for the Fort’s greatest achievement – the massive Picture Wall that graces the outer ramparts of the Fort. A vibrant composition made from glazed tiles, faience and frescoes, the Wall has unfortunately not survived well.  Thankfully, when I visited, it was in the midst of being majorly restored by the Aga Khan Foundation.

Shah Jahan gave the Fort its most beautiful and enduring structures – his quadrangle (the Shah Burj Quadrangle) is a dream in white marble and the very first quadrangle the visitor would encounter today. Here sits the Sheesh Mahal, or Palace of Mirrors, with its walls decorated with pietra dura and thousands of small pieces of mirror. Here also sits the Naulakha Pavilion, the personal chambers of the Emperor Shah Jahan. It is said he embellished the ceiling of the Pavilion with glass so when he dined there with his beloved Mumtaz Mahal, the candle-light reflected upon the ceiling would give the impression that they were dining under a night-sky full of stars.

Shah Jahan also gave the Fort the exquisite Moti Masjid (or Pearl Mosque), which at the time of my visit was closed for renovations and inaccessible. What was accessible was the vast and cavernous Summer Palace complex in the basement of the Shah Jahan Quadrangle. This was where the Royal Family would escape in the hot Summer months. The Palace was cooled by an ingeniously-designed ventilation system that brought cool air from the outside into the Palace.  Finally, Shah Jahan also built the Diwan-e-Am, or Hall of Audience in the Persian Chehel Sotun (40-pillar public hall) style.  The Diwan-e-Am is an 1849 reconstruction during the British period as the structure was destroyed by the Sikhs in 1841.

Emperor Aurangzeb, the most pious of the great Mughals, gave the Fort and the city its most important religious edifice – the Badshahi Mosque. When completed in 1673, it was the largest mosque not just in Mughal India, but in the entire world. That title was only overtaken in 1986 (and there are quite a few mosques today larger than it). Aurangzeb also gave the Lahore Fort its most iconic Gate – the Alamgiri Gate, which stands across from the entrance to the Badshahi Mosque.

The Sikhs, under Maharaja Ranjit Singh, ruled the Punjab and Lahore from 1799 to 1849. They too imposed their presence onto the Fort. In fact, one of the first historic structures the visitor encounters at the Fort is the Samadhi (or Tomb) of Ranjit Singh, which sits in its own small compound, right beside the Badshahi Mosque and near one of the original gates to the Fort.

The Sikh quadrangle is closed off and forbidden to locals. But for a small fee and with a local guide, one who is not Muslim may enter the compounds to view the interior. The compounds also hold a Gurdwara that stands on the spot where the 5th Sikh Guru, Guru Arjan Dev was martyred.  The entire site is thus one of great spiritual importance to the Sikhs, and site of holy pilgrimage. Once a year, Sikhs come here from all over India, Pakistan and the world to make obeisance.

Ranjit Singh also gave the fort his own Quandrangle – the Hazuri Bagh gardens, which link the Badshahi Mosque and the Alamgiri Gate. In the middle of the garden sits the Hazuri Bagh Baradari, built in 1813 in exquisite Mughal style to commemorate Ranjit Singh’s capture of the Koh-I-Noor Diamond.  The Koh-I-Noor was ceded to Queen Victoria upon the British capture of Lahore, and remains today, part of the British Crown Jewels.

Meanwhile, the British, while in Lahore, took over the fort when they defeated the Sikh Empire in 1849. They used parts of it to store ammunition, and reconstructed other structures mentioned above. One of the first things a visitor would see today, is an ammunition store built on the ramparts of the Fort just behind the Alamgiri Gate.

Finally, during the independence period, yet another important monument would be built around the Fort, this time in the compounds of the Hazuri Bagh. This is the tomb and memorial to Allama Iqbal, a major poet of the British Indian period, who is widely regarded to have inspired the Pakistan Movement. He wrote in Persian and Urdu and is read by Pakistani, Indian and Iranian alike. The mausoleum itself is made of red sandstone and designed with Mughal elements. It is simple and dignified, and fits well within the larger context of the Fort.

The following gallery provides a view of the Fort from the perspective of the route the visitor would take through the Fort today. And thus the structures from various periods are encountered not in the order they were constructed.

The imposing and monumental entrance gateway to the Badshahi Mosque. The Entrance faces the Hazuri Bagh.

Close-up of the detailed ornamentation on the darwaza, or gateway to the Mosque. 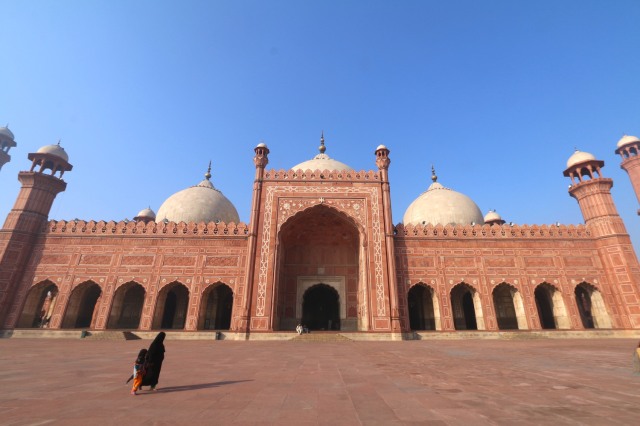 The main building of the Mosque itself represents the pinnacle of Mughal religious architecture. After this mosque, and after the Emperor Aurangzeb, the Mughal Empire falls into decline.

The mihrab, or prayer niche of the Badshahi Mosque. 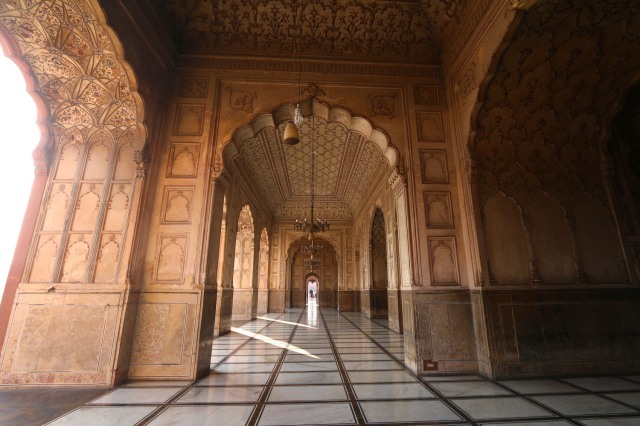 Cross-sectional view down the centre of the mosque.

Just to the left of the entrance to the Badshahi Mosque sits the simple, dignified and unassuming Mausoleum of Allama Iqbal, guarded by the Pakistan National Guard.

The Hazuri Bagh Baradari was built in 1813 by Maharaja Ranjit Singh to commemorate his taking of the Koh-I-Noor Diamond. It sits at the centre of the Hazuri Bagh on an axis that joins the Badshahi Mosque to the Alamgiri Gate. The baradari itself is made of exquisite white marble and in designed in the Mughal tradition.

View of the Alamgiri Gate from the Hazuri Bagh Baradari. The Gate was built by Emperor Aurangzeb in 1674, and is the most iconic structure of the Fort.

The Samadhi of Maharaja Ranjit Singh sits just beside the Badshahi Mosque and one has to pass it to enter the Fort today. The Samadhi is distinguished by its white marble dome and complex that marries Sikh, Hindu and Mughal architecture. The golden dome marks the Gurdwara Dera Sahib, which stands on the spot where the 5th Sikh guru was martyred. The entire complex dates to the 19th century.

Entrance to the Samadhi and Gurdwara complex. Note the Hindu iconography over the doorway.

The Samadhi was completed in 1848.

The interior of the Samadhi is constructed in white marble

This is a view within the Gurdwara Dera Sahib, which is presently undergoing a major renovation to expand the complex so it can hold the ever-growing number of pilgrims.

The walls of the gurdwara are also covered with beautiful frescoes, that unfortunately, have not stood the test of time well. 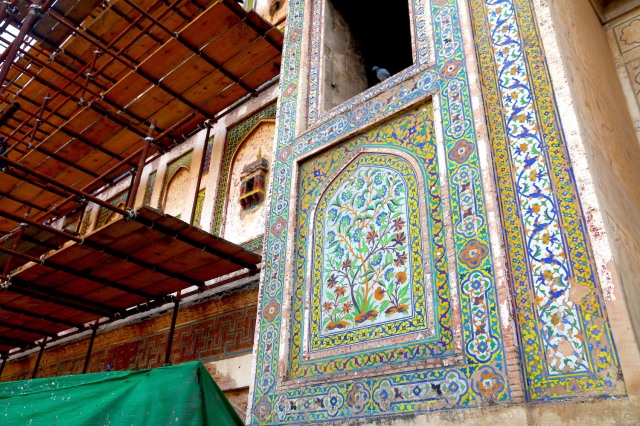 Today’s main entrance to the Lahore Fort is by its beautiful and historic Picture Wall. 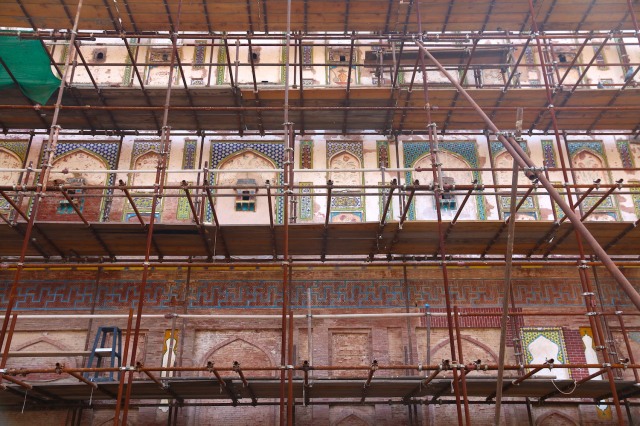 The Picture Wall was built during the reign of the Emperor Jahangir and was built in the course of the 1620s. It is today being extensively restored by the Aga Khan Trust for Culture.

Here is a section of the wall that had not yet undergone restoration. This demonstrates just how delightfully vibrant the wall would have been in its heyday, and how it has sadly, not withstood the test of time.

Around the wall stand fortifications built during the Sikh Empire. 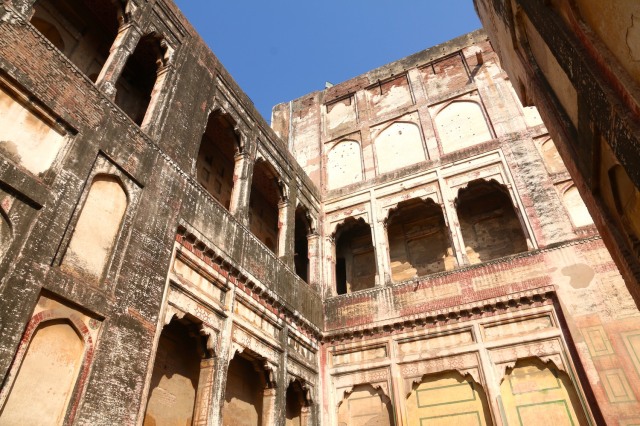 Entrance to the Fort today is by the Hathi Pol, or Elephant Gate. This was built during the reign of the Emperor Shah Jahan.

One of the first things the visitor encounters, is a British-era ammunition store, built upon the ramparts of the Fort, just behind the Alamgiri Gate. 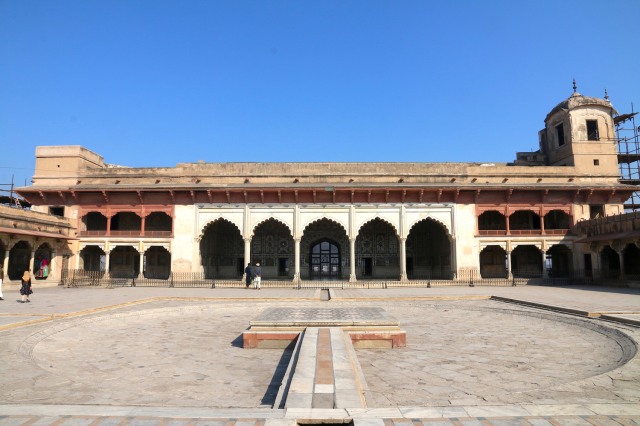 The first quadrangle the visitor encounters today is the Shah Burj Quadrangle, which was built during Shah Jahan’s time. This is the Sheesh Mahal, or Palace of Mirrors, completed in 1632.

The walls and ceilings of the Sheesh Mahal are covered with frescoes and pieces of glass. This is most definitely a highlight of the Fort.

Close-up of one of the frescoes depicting the Hindu god, Krishna and his consort, Radha.

The Naulakha Pavilion is constructed of exquisite white marble and completed in 1633 during Shah Jahan’s time.

The far-end of the Naulakha Pavilion used to overlook the River Ravi, which has since shifted its course such that it no longer flows just beyond the ramparts of the Fort.

The Summer Palace in the Basement of the Shah Burj Quadrangle. [It was too dark for me to photograph anything so I’m using a creative commons image.] This file is licensed under the Creative Commons Attribution-Share Alike 4.0 International. Author: Lahore Walled City Authority.  Available at: https://commons.wikimedia.org/wiki/File:Summer_Palace_Lahore_Fort_(WCLA).jpg 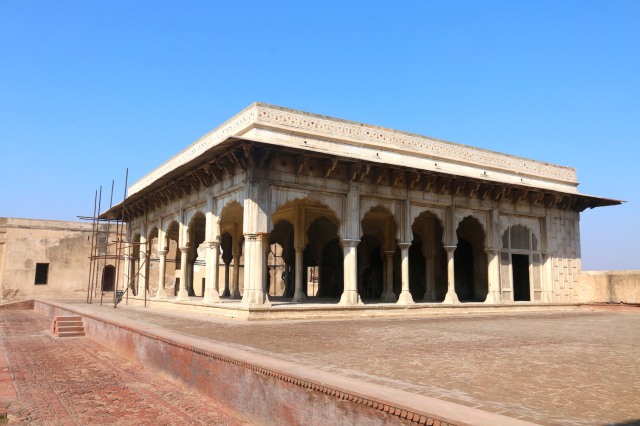 The Diwan-i-khas, or Hall of Private Audience was built also during Shah Jahan’s reign.

Jahangir’s Quadrangle, with the Bari Khwabgah, or Jahangir’s Sleeping Quarters at centre. This structure was rebuilt by the British. To the right is the Sikh-era Sehdari Pavilion.

Close-up of the Sikh-era Sehdari Pavilion, which served as an office for a governor during Ranjit Singh’s reign.

Akbar’s Quadrangle – this is one of the dalans. Note the red sandstone pillars with Hindu motifs as ornamentation. Unfortunately, I did not have time to take close-up photographs.

The Hall of Red Sandstone, built during the Emperor Akbar’s reign.

The Diwan-e-Am was built during the reign of Shah Jahan. It was completely rebuilt in 1849 by the British, after being destroyed by the Sikhs in 1841.

And finally…a backward glance at the Alamgiri Gate.

I am a wandering cityophile and pattern-finder who is pathologically incapable of staying in one place for any long period of time. When I do, I see the place from different perspectives, obsessive-compulsively.
View all posts by Kennie Ting →
This entry was posted in Art & Architecture, Cities & Regions, Culture & Lifestyle, Heritage, Landmarks & History, Museums, Photography, Travel & Mobility and tagged Architecture, Badshahi Mosque, British India, British Punjab, Heritage, Lahore, Lahore Fort, Mughal Empire, Pakistan, Port and Princely Cities of the Subcontinent, Ranjit Singh, Sikh Empire, The Grand Tour, Travel. Bookmark the permalink.

1 Response to The Lahore Fort and Badshahi Masjid