RAFFLES IN SOUTHEAST ASIA – REVISITING THE SCHOLAR AND STATESMAN

Today, Asian Civilisations Museum’s first special exhibition of the year – RAFFLES IN SOUTHEAST ASIA: REVISITING THE SCHOLAR AND STATESMAN opens. In typical risk-taking fashion, the exhibition tackles Southeast Asian colonial history head-on, and reveals how this history is complex and rarely a simple matter of Europeans exploiting Southeast Asians.  Local rulers in Southeast Asia also, simultaneously exploited the Europeans for their own gain.  I reproduce here my foreword for our excellent (and beautiful) exhibition catalogue.

This year marks the 200th anniversary of the founding of modern Singapore. The Asian Civilisations Museum commemorates the landing of Sir Stamford Raffles  in Singapore by presenting, as its first major special exhibition of the year, a critical take on the theme of Raffles as collector, scholar, and statesman in Southeast Asia.

The exhibition takes in the ten years before the founding of modern Singapore in 1819, exploring Raffles’ career as Lieutenant-Governor of Java (1811–16), and then Bencoolen (Bengkulu), in south-western Sumatra (1818– 24), and events in the immediate lead-up to 1819 itself.

We are pleased to be co-curating this exhibition with the British Museum, and to feature, at the very core of the exhibition, the Raffles Collection – an important group of mainly Javanese ethnographic material that Raffles personally amassed during his time in Java, and then brought back to Britain – most of which today resides in the halls of the British Museum.

The exhibition has three aims. The first is to demystify Raffles – to present him in a different light from how he is usually portrayed, which is as a mythical founder figure frequently relegated to a single paragraph at the beginning of school history texts on Singapore. Raffles features strongly in the popular consciousness here, but most Singaporeans don’t know much about him beyond his name and the two Raffles statues at Empress Place along the Singapore River. We hope the exhibition provides a broader, more balanced view of his achievements and interests, as well as an insight into his personal life and activities before and after his brief, but important, time in Singapore.

The second aim of the exhibition is to tackle the question of how to re-present, for a contemporary audience, colonial collections of Southeast Asian material that continue to sit at the heart of many major museums today. This is a topical interest in the field of museology, as an increasingly connected world confronts its colonial pasts. Alongside the British Museum’s Raffles Collection, another important collection featured in the exhibition – and one closer to home – is the former Raffles Library and Museum Collection, amassed by the British during the colonial period. It became the core of the Singapore National Collection, and today it is split between the Asian Civilisations Museum (the ethnographic and archaeological collections), the National Museum of Singapore (the paintings), and the Lee Kong Chian Natural History Museum (the natural history collection).

Long regarded as little more than an afterthought, objects from the Raffles Library and Museum have recently become a core building block and research impetus at the Asian Civilisations Museum and at  the recently opened Lee Kong Chian Natural History Museum. Our museum, in particular, continues to build upon the foundations laid by the Raffles Museum’s collections in our presentation of and research on the art, archaeology, and ethnography of Southeast Asia.

The third aim of the exhibition is to provide a history and art history of Java and its neighbours before  the arrival of the British, including Singapore’s own roots in the Malay world. The exhibition takes the visitor on a virtual tour of the great empires and royal courts of Java – from the terrestrial Sailendras to the maritime Majapahit; from the sultanate of Mataram to today’s central Javanese royal courts of Surakarta, Yogyakarta, Mangkunegaran, and Pakualaman.

I wish to thank Hartwig Fischer, Director of the British Museum, and the curators at the British Museum and the Asian Civilisations Museum who have worked closely together to co-curate this exhibition. I wish also to thank the many other partner museums, archives, and institutions that have generously lent objects to the exhibition to complete the narrative of Raffles’ life and career.

Raffles in Southeast Asia: Revisiting the Scholar and Statesman concludes the Year of Southeast Asia here  at the Asian Civilisations Museum. This exploration  of the region’s art, history, heritage, and cultural diversity also included a major exhibition on the European encounter with Angkor, and the launch of new permanent galleries at the museum spotlighting Southeast Asia. In our museum’s typical fashion, we eschew traditional approaches to presenting Southeast Asia and instead focus on the cross-cultural encounters between Europeans and Southeast Asians. We do not shy away from the colonial gaze, but also explore the extent to which colonial methods of representation continue to impact how we, Southeast Asians, consider and conceive of our own region today.

I hope this exhibition opens the eyes of visitors to  an aspect of Singapore’s history and heritage that appears familiar, but on closer examination, is revealed  to be a surprisingly complex chapter of our past.

What better time than now, in this bicentennial year, to re-open this chapter. 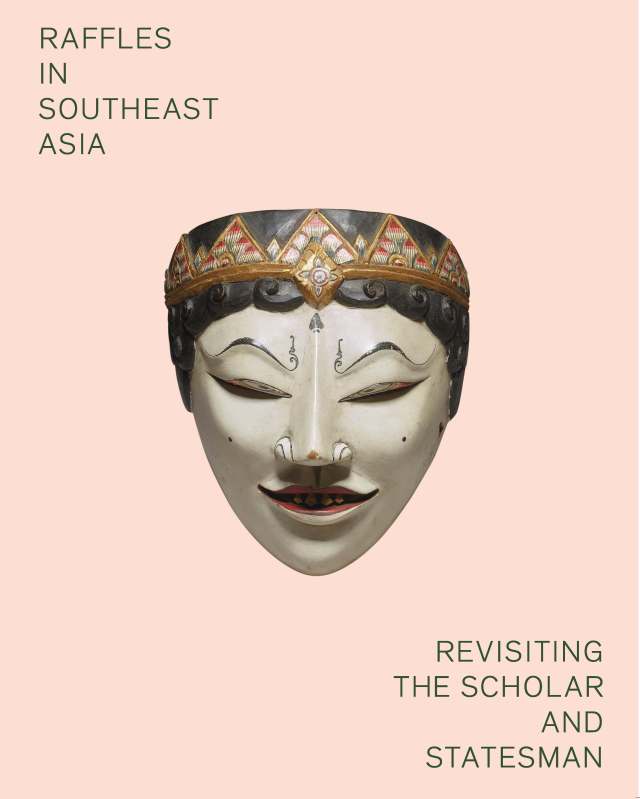 The (subversively beautiful) cover of the RAFFLES IN SOUTHEAST ASIA – REVISITING THE SCHOLAR AND THE STATESMAN Exhibition Catalogue. #acmsg #UnderstandEverything

I am a wandering cityophile and pattern-finder who is pathologically incapable of staying in one place for any long period of time. When I do, I see the place from different perspectives, obsessive-compulsively.
View all posts by Kennie Ting →
Gallery | This entry was posted in Art & Architecture, Culture & Lifestyle, Heritage, Landmarks & History, Museums, Singapore, Southeast ASia and tagged Asian Civilisations Museum, Heritage, History, Raffles, Singapore. Bookmark the permalink.