Humayoun’s Tomb, in its Paradise Garden.

Delhi is a city of monuments, tombs and gardens. It is actually a very beautiful city, and the perfect introduction for any tourist, let alone a Grand one, to India.

On a clear day with blue skies – an increasingly impossible phenomenon due to the crushing air pollution – the city has a charm all unto its own.

We continue our sojourn here with a romp through two Mughal tomb complexes, a large garden in central Delhi, and a few other smaller monuments. Most of our tour takes place south of (Lutyens’) New Delhi.

Of the five great Mughal Emperors, one of them – Humayoun, the second of the Great Mughals – is located here in Delhi.  Of the other four – Babur’s Tomb lies in Kabul, Afghanistan, Akbar in the outskirts of Agra, Shah Jahan is entombed with his wife in the Taj Mahal, and Jahangir’s tomb sits in Lahore, Pakistan.

Humayoun’s tomb was built in 1570 and commissioned by the Mughal Emperor’s widow, Empress Bega Begum. It begins an architectural tradition of Mughal Royal Mausoleums that reaches its zenith with the Taj Mahal.

The tomb itself is symmetrical, and situated in a Persian-style, Paradise Garden or Char Bagh. The entire complex, which includes other important and minor tombs, is a UNESCO World Heritage Site. 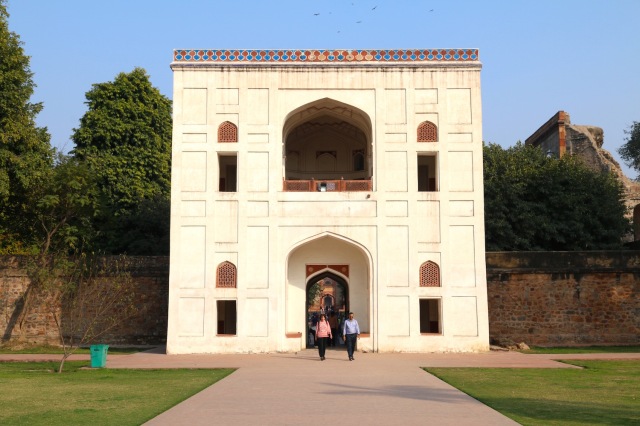 Approach to the Tomb.

The simple interior of the tomb.

Arcades at the base of Humayoun’s Tomb.

Close-up of the arcades.

Side view of the tomb structure.

The tomb of Isa Khan Niyazi, who was an Afghan noble during the Suri Dynasty.

Detail of the underside of the dome – Isa Khan’s

Some 4 kilometres down Lodhi Road from Humayoun’s Tomb sits Safdarjung’s Tomb, another example of Mughal Tomb Architecture. The tomb was built in 1754, during the late Mughal period and is the last monumental tomb garden built by the Mughals.

Safdarjung was the Prime Minister of the Mughal Empire during the reign of Emperor Ahmed Shah Bahadur. Interestingly, the tomb complex sits facing Humayoun’s Tomb on the central 4 kilometer axis of Lodhi Road. 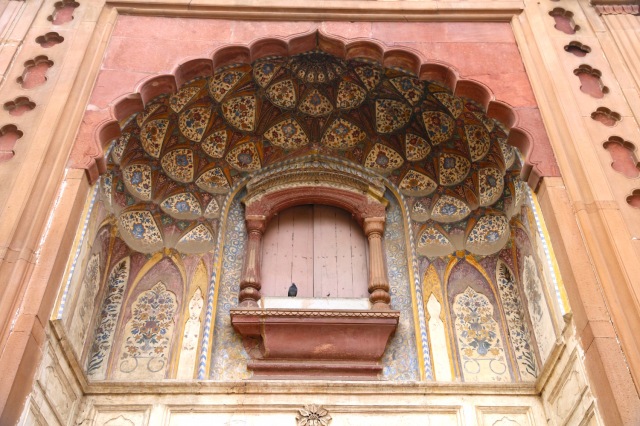 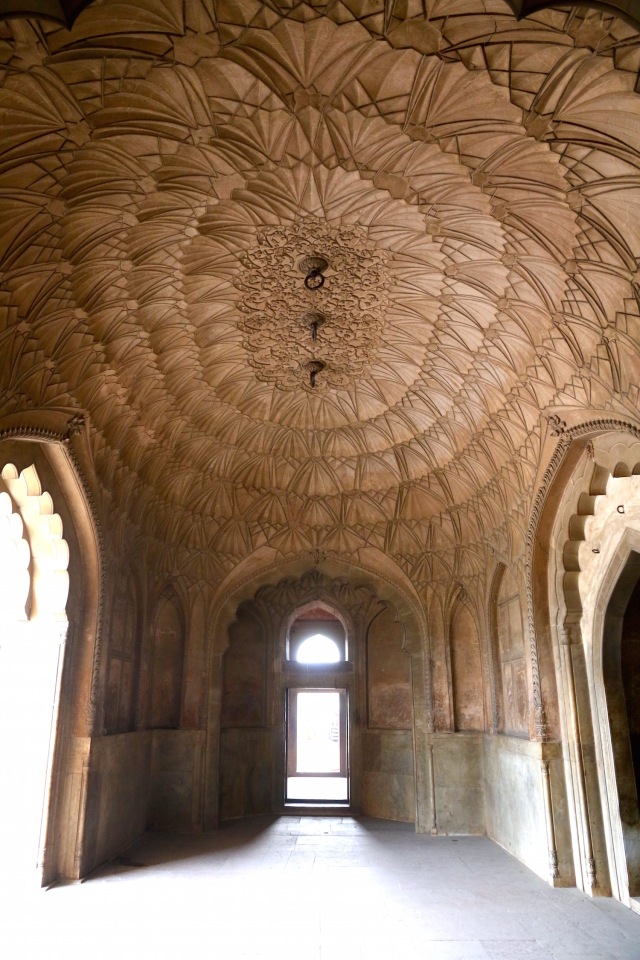 View from the back of the tomb.

Between both tombs, though a stone’s throw from Safdarjung’s Tomb, sits Lodi Gardens. The sprawling gardens are home to yet more tombs, hailing primarily from the Lodi Dynasty (from which the Gardens get their name) but also from the Sayyid Dynasty – the two late dynasties of the Delhi Sultanate.

The earliest of the tombs in the Gardens is that of Mohammed Shah, the second last of the Sayyid Dynasty,  built in 1444. Two other important structures in the Gardens are the Bara Gumbad and (three-domed) Mosque (from 1494) – which I found just delightful in terms of its architectural detail – and the tomb of Sikander Lodi (1517), the second-last of the Lodi Sultans.

Lodi Gardens is a delightful place when the weather is fine, and one can often see groups of young persons, dating couples, or whole families picnicking on the green, around the many scattered monuments.

Tomb of Muhammad Shah, of the Sayyid Dynasty. 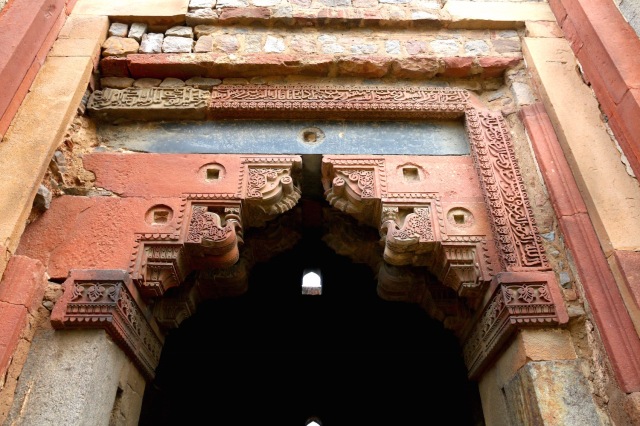 Detail of the entryway to the Bara Gumbad. 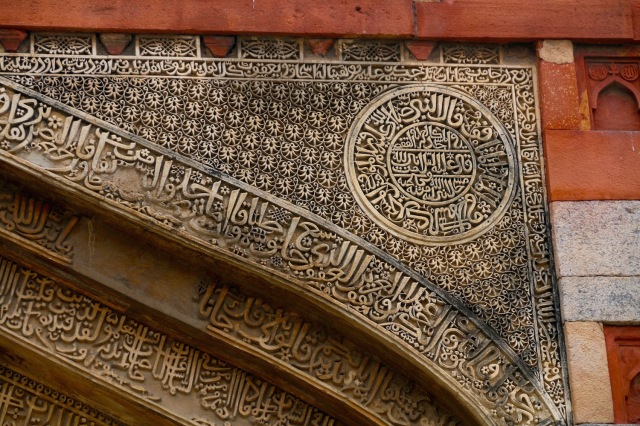 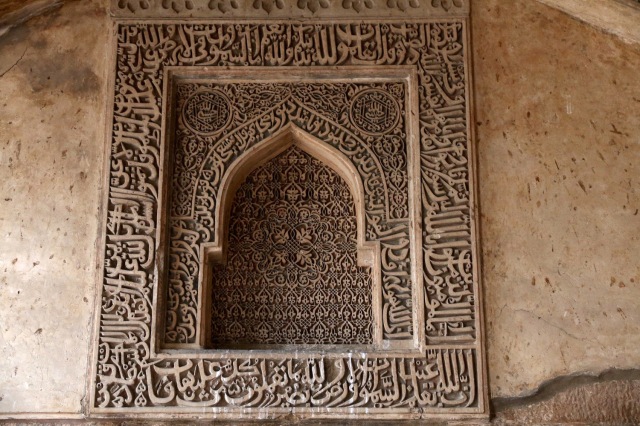 We take a detour up north through Lutyens’ New Delhi to Connaught Place. In the vicinity sit two key monuments.

The first is the Jantar Mantar – a historic observatory with a small collection of monumental astronomical instruments, dating from 1723. Designed and built by Maharajah Jai Singh II of the Rajput state of Jaipur, it is one of five Jantar Mantars, two other jantar mantars being located in Varanasi and the city of Jaipur itself.

Within walking distance from the Jantar Mantar is the Agresen ki Baoli, an ancient stepwell that probably dates from the 14th century. It is also popular with tourists and Delhi-ites alike. 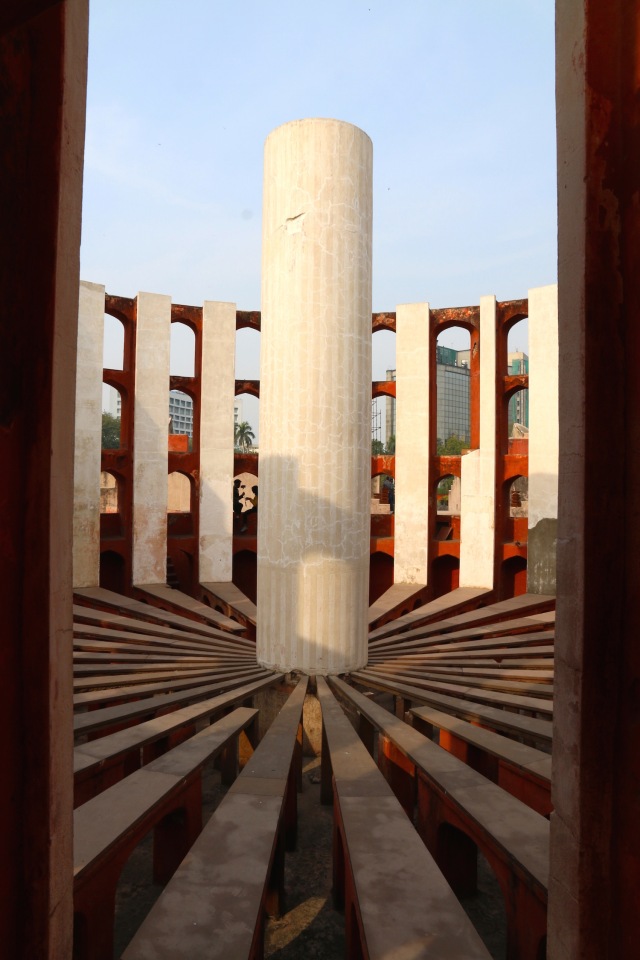 Inside view of Rama Yantra, used to measure the altitude of stars based on the longitude and latitude of the earth. 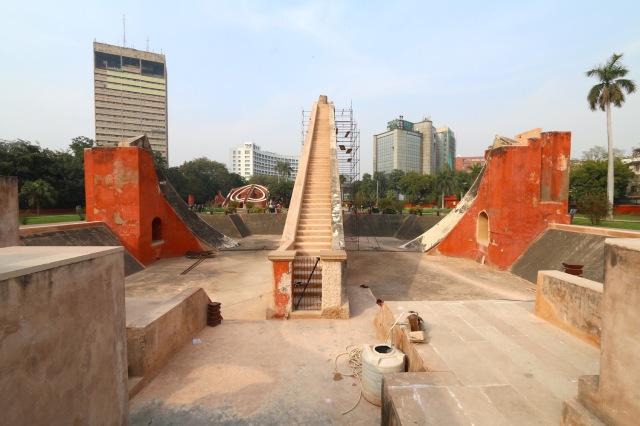 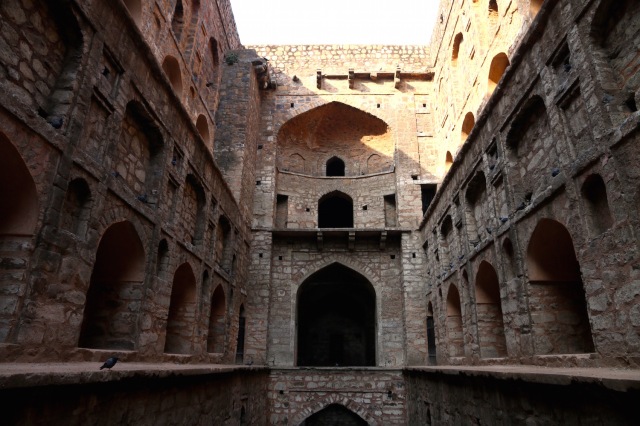 Near the foot of the baoli.

A backward glance at Humayoun’s Tomb.

I am a wandering cityophile and pattern-finder who is pathologically incapable of staying in one place for any long period of time. When I do, I see the place from different perspectives, obsessive-compulsively.
View all posts by Kennie Ting →
This entry was posted in Art & Architecture, Cities & Regions, Culture & Lifestyle, Heritage, India, Landmarks & History, Photography, Travel & Mobility and tagged Agresen ki Baoli, Delhi, Humayoun's Tomb, India, Jantar MAntar, Lodi Gardens, Mughal Architecture, Mughal Empire, Old Delhi, Port and Princely Cities of the Subcontinent, Safdarjung's Tomb, The Grand Tour. Bookmark the permalink.