View of Dashashahwamedh Ghat from the Ganges River.

Older than the other cities on this Grand Tour. Older than most cities…

It rises, like a mirage, on the west bank of the mighty Ganges River. It is a port city, but of souls first and foremost. The beating heart of Hindu civilisation, the city draws thousands of pilgrims each year, who come here to bathe in the sacred waters, or to die and be cremated on the ghats.

Pilgrims at the Holy River.

Pilgrim at the River.

Benares is the British transliteration of Varanasi, meaning “between the rivers Varana and Asi”. The Hindus also call the city by another name: Kashi, or “luminous city”.

The city is best known for those ghats, or “landing banks”, of which there exist some 80 or so along the same curving stretch of waterfront. The most famous of these ghats are probably the cremation ghats – such as Marnikarnika Ghat – where the bodies of those who have passed are taken to be placed on wooden pyres and burnt. Then there is Dashashwamedh Ghat, known for its expansive view, and for it playing host to the Ganga aarti, or the nightly ritual prayer to the Goddess Ganga. 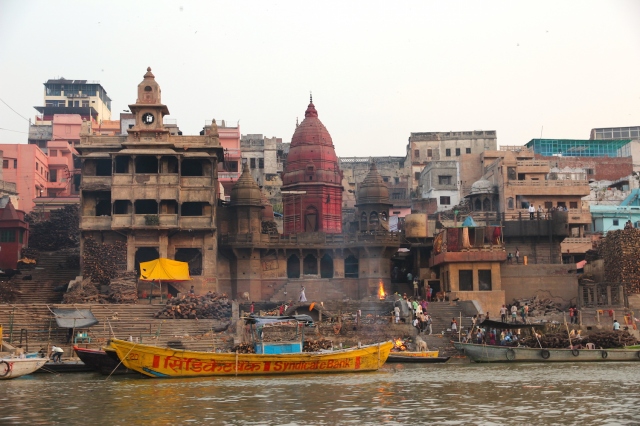 Marnikarnika Ghat, where the fires of the cremation pyres burn. 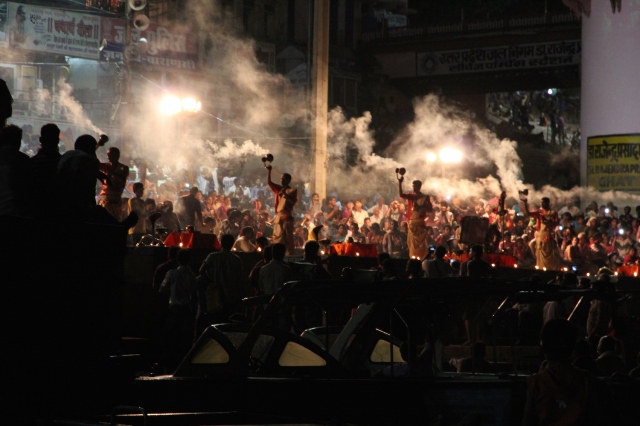 There are many other ghats of course, such as the Chet Singh Ghat and the Man Singh Ghat, the Darbhanga Ghat and the Karnataka State Ghat, and we will visit each of these in turn, in the weeks to come. 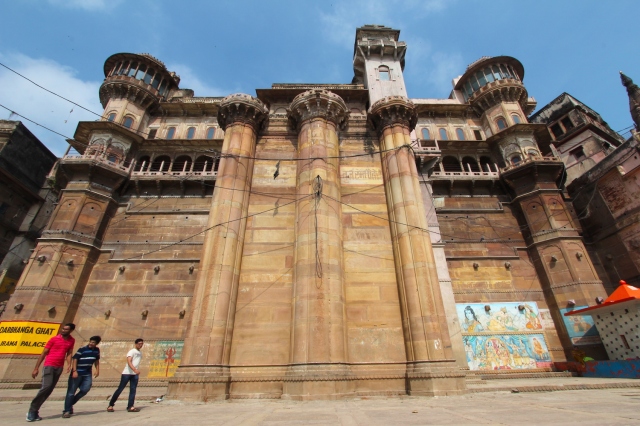 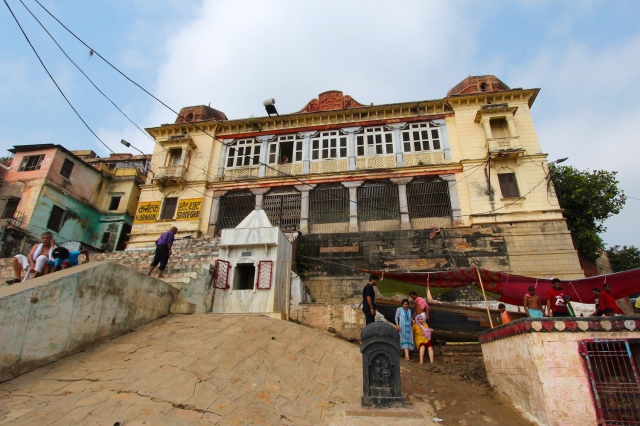 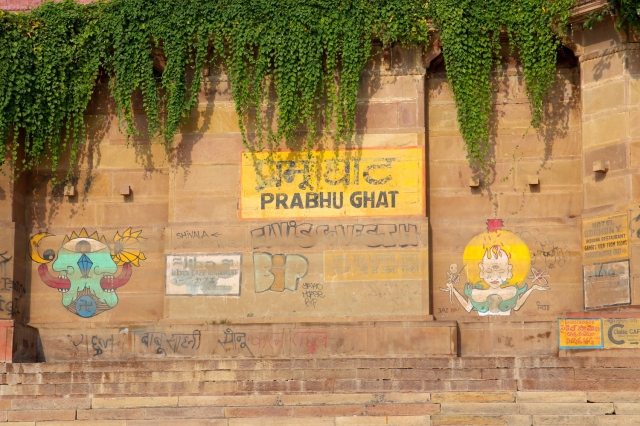 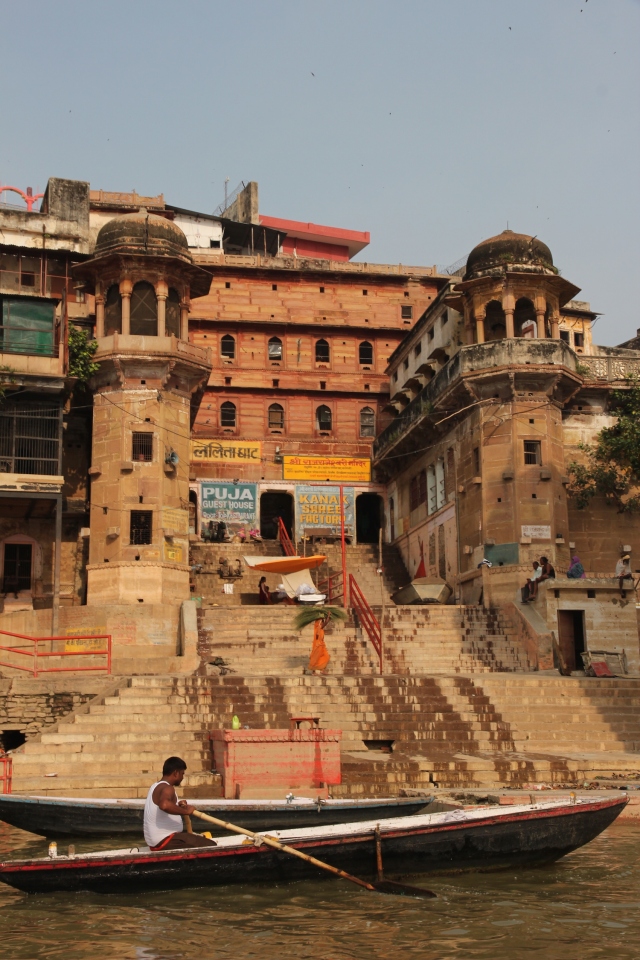 A pall of age and antiquity hangs over the many temples, palaces and other structures on the ghats. But the city itself dates only from the 18th century, built primarily by the Maratha and Bhumihar Kings of Varanasi. Much of the city, particularly its Hindu temples, were razed to the ground by the armies of the Mughal Emperor Aurangzeb in 1656. The Emperor erected mosques in their place; one of these – the spectacular Alamgir Mosque still dominates the skyline at Panchganga Ghat.

Sweeping view of the facades along the ghats. 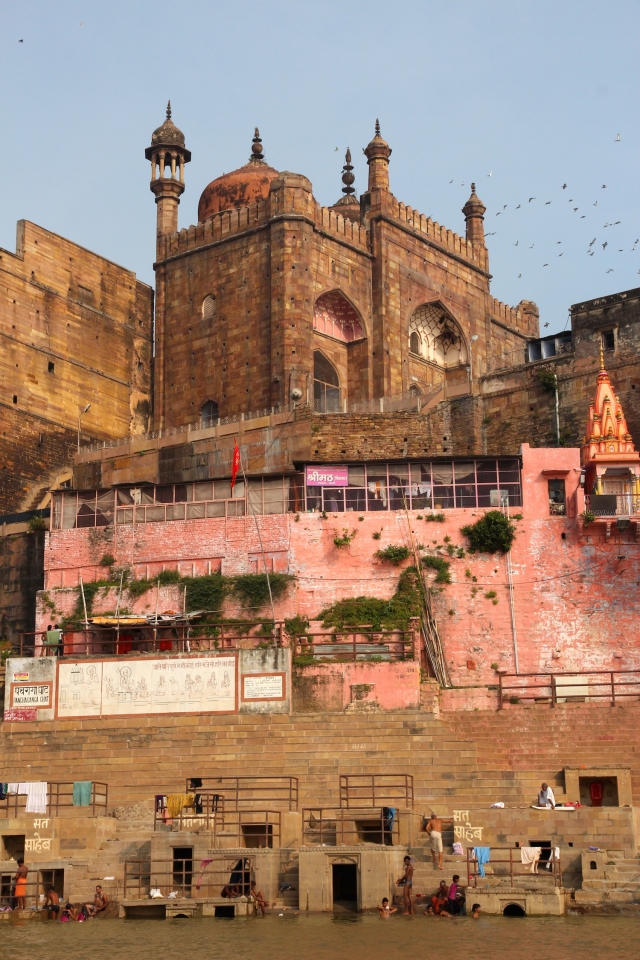 Alamgir Mosque, built by the Mughal Emperor Aurangzeb in the 17th century. It stands at Panchganga Ghat.

And then there were the British, who came and were awestruck by the spectacle and the pageantry along the banks of the holy river. They wisely chose to steer clear, building their own cantonment and administrative settlement  – complete with Christian churches and Indo-Saracenic style administration buildings – west of the Holy City.  The British city still stands today, and exists in stark contrast to the city of the Hindus.

The Great Hall of Benares Sanskrit College, established by the British in 1791. This hall is in classic Indo-Saracenic style, merging the Gothic with local architectural elements.

In this second installment of The Grand Tour Part III, I go in search for the sublime, exploring the ghats and the alleyways of holy Varanasi, occasionally taking to the streets of Benares Cantonment.

Above all things, flowing its ageless, timeless way through the city, there is always the River. Holy Ganga, mother of all rivers, witness to the ever-turning cycle of life and of history.

Tourist craft and a panoramic view of the ghats. 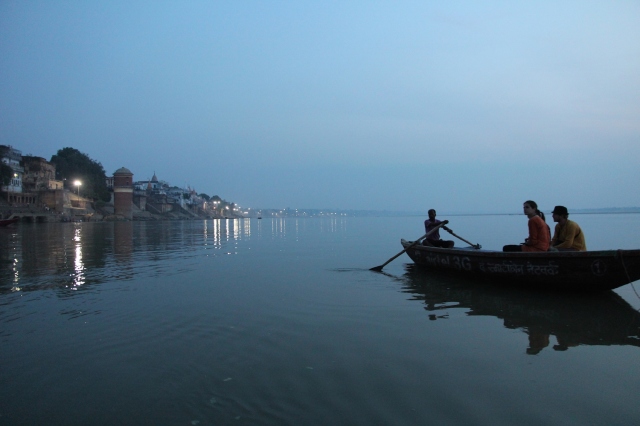 The River at dawn. 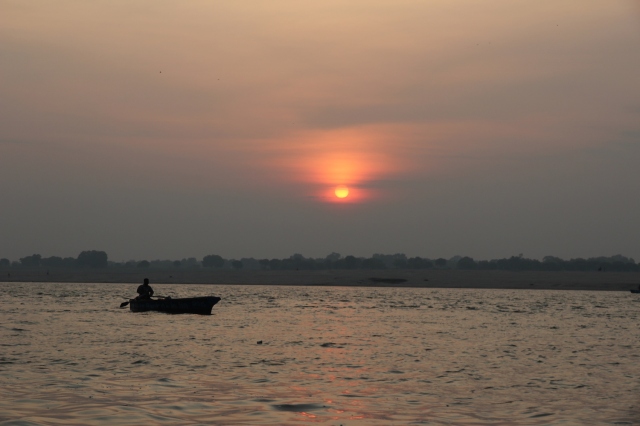 The River at dawn.

The River at night.

Another view of Dashashmewadh Ghat at dusk, as tourists arrive for the nightly Ganga aarti.

I am a wandering cityophile and pattern-finder who is pathologically incapable of staying in one place for any long period of time. When I do, I see the place from different perspectives, obsessive-compulsively.
View all posts by Kennie Ting →
Gallery | This entry was posted in Art & Architecture, Cities & Regions, Culture & Lifestyle, Heritage, India, Landmarks & History, Literature & Philosophy, Photography, Travel & Mobility and tagged Benares, Dashasashmewadh Ghat, Ganges, Ghats, Heritage, Kashi, Marnikarnika Ghat, Port and Princely Cities of the Subcontinent, The Grand Tour, The Grand Tour III, Travel, Varanasi. Bookmark the permalink.