View of Writer’s Building from across Dalhousie Square and the Tank.

Calcutta’s former European Town is a large, sprawling, highly-planned city that occupies much of the southern reaches of Central Kolkata today. At its heart is Fort William, the fortified, walled settlement that the English East India Company established here, along the banks of the Hooghly River in 1696 – just like Fort St George in Madras, which they established earlier in 1644, and Fort George in Bombay, which they would establish in 1769.

The tour of European Town, or “White Town”, as it was colloquially referred to, is broken into two segments. In this segment, we tour the area around the former Dalhousie Square, today known as BBD Bagh.

This was the European Town’s civic and commercial hub, playing host to Calcutta’s most impressive, monumental civic buildings, as well as the headquarters of its major banks and trading houses.

At the centre of this precinct is Dalhousie Square itself, which held and still holds The Tank – an artificially created fresh water reservoir, dug in the 1700s, that, being fed by a natural spring, used to provide the colonial population with its fresh water and fish up until the late 1800s.

It was dug in the absolute middle of the city and still sits there today, albeit no longer providing potable water nor fish to the city’s residents. It is today called Lal Dighi and is assiduously fenced off, except on special occasions when Dalhousie Square itself is opened up as a park to the public.

We begin our walk at the High Court building near the junction of Strand Road (which sits on the Hooghly waterfront) and Esplanade Row West. From there, we head East towards Government House, turning left to head north up Government Place West towards Dalhousie Square. We take in the monuments along the South, East and North of the Square before diving into the Financial and Commercial District proper.

The surreal and imposing High Court Building, built in 1872 in a Gothic style. 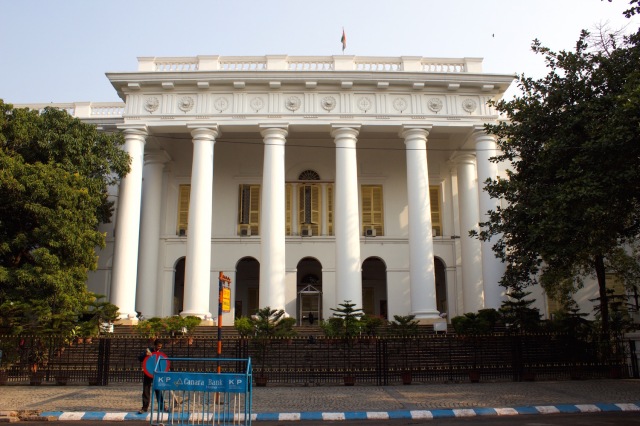 Just down the street along Esplanade Row West is Town Hall, built in 1813 in a Doric style. 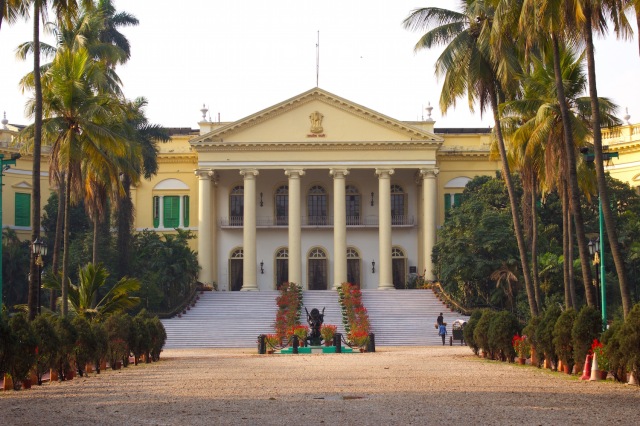 Government House, completed in 1803 in a Palladian style, was initiated by former Governor-General Lord Wellesley. It was purportedly based on the plan of Kedleston Hall in the UK. Upon its completion, it caused a scandal because of how opulent and expensive it was and because this was ostensibly the residence of a Civil Servant. 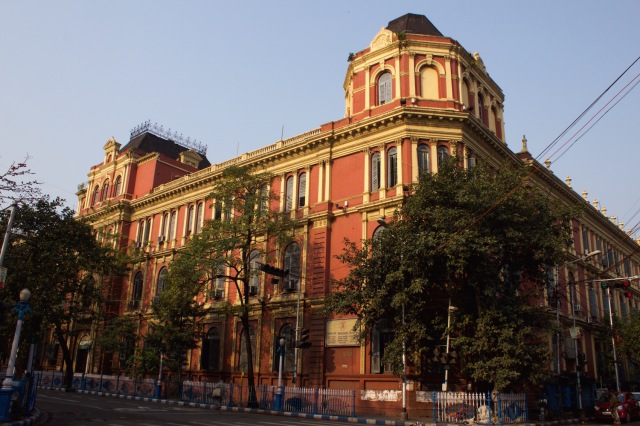 Along Government Place West sits the very ornate, Victorian former Treasury Building, built in 1884. It is today the Offices of the Accountant General of West Bengal.

St John’s Church, completed in 1787, is the oldest extant church building in Calcutta. Its design closely followed that of the Church of St Martin-in-the-Fields in London. The church grounds play host to Job Charnock’s Mausoleum, as well as a replica of the memorial to the Black Hole incident.

The interior of the Church is simple, but well-maintained, and offers respite from the busy Calcutta streets. 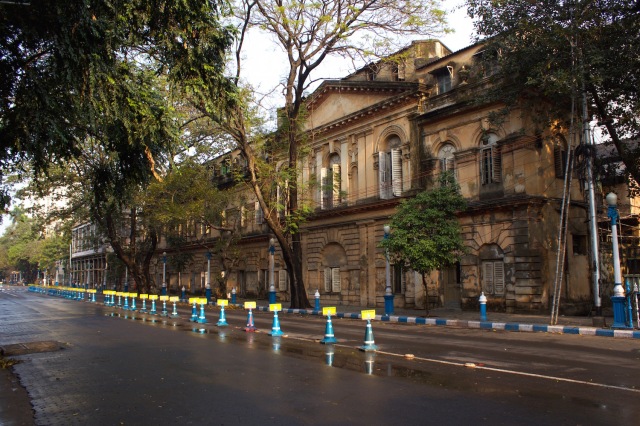 The Governor’s Staff Quarters are a range of Palladian-style buildings that flank Government Place West and were built in 1908. 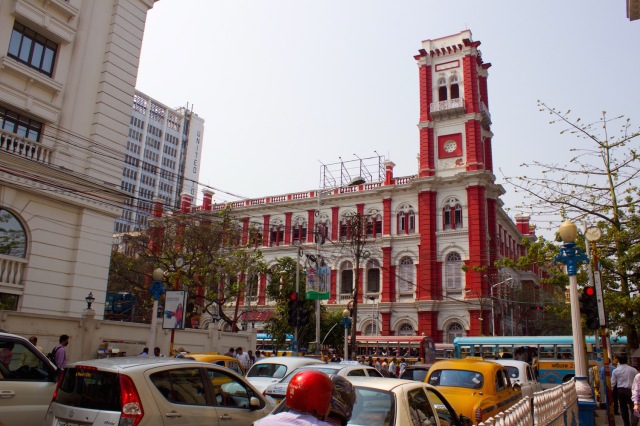 At the southeastern corner of Dalhousie Square sits the former Central Telegraph Office with its distinctive tower. It was completed in 1876.

Diagonally across the street from it, also at the southeastern corner of Dalhousie Square, sits the former Offices of the Currency Department, built in 1868 with distinctive Venetian style buildings. 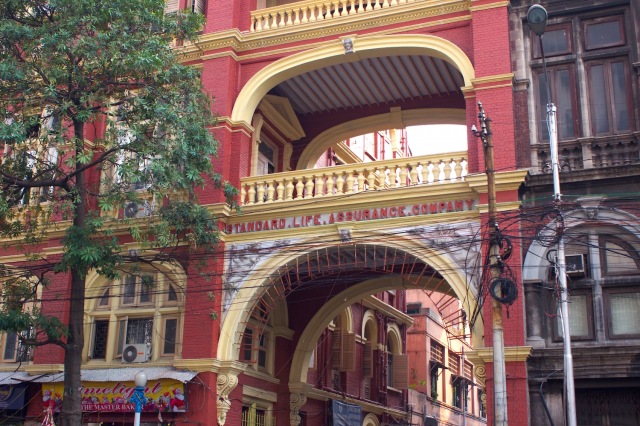 Heading along the south flank of Dalhousie Square, one finds the Standard Life Assurance Company building, completed in 1895.

Here is a view again of the Standard Life Assurance Company building, designed in a Victorian style.

Further down and at the south-western corner of Dalhousie Square, sits the offices of the Hong Kong & Shanghai Bank Corporation, recalling the HSBC headquarters in Shanghai. It was built in 1928 in an Art Deco style.

A small detour along Hare Street takes one to the Small Causes Court, built in 1874 in a Neo-classical style.

Mercalfe Hall was named in the honour of a former Governor-General Lord Metcalfe. It was completed in 1844 in a Neo-classical style closely modelled after the Temple of the Winds in Athens. It used to house the Agri-Horticultural Society and the Public Library, and sits on the junction of Hare Street and Strand Road. 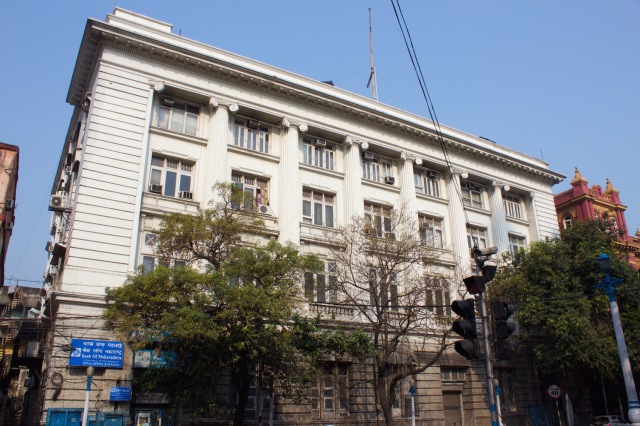 Back on the south-western corner of Dalhousie Square sits McLeod House, built in 1917 in a Neoclassical style.

Beside it, the wonderfully elaborate edifice of the Royal Insurance Company building, completed in 1902 in an Edwardian style.

Next along the western flank of Dalhousie Square sits perhaps the most distinctive building in Calcutta – the General Post Office Building, with its huge Neoclassical dome was completed in 1868. 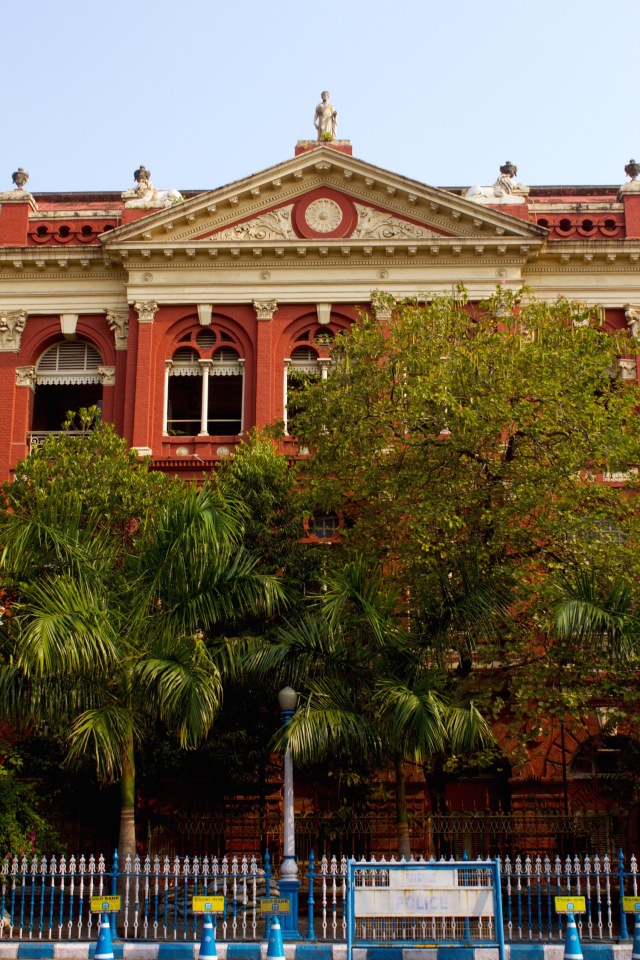 Occupying the entire northern flank of Dalhousie Square is the Writer’s Building, which housed the Government Secretariat. It was built in 1776 and has had numerous extensions made to it in the course of the 19th century.

On the northeastern corner sits St Andrew’s Kirk, built to serve the city’s Scottish congregation. It was completed in 1818 in a Palladian style.

At St Andrew’s Kirk we double back along Lyon’s Range into the Financial District proper, which sits along the central artery of Netaji Subhas Road, previously known as Clive Road. We head north along the same artery, and admire the various monumental pieces of commercial architecture along both sides of the street, ending our tour at the imposing, modernist Capital Bank of India building. 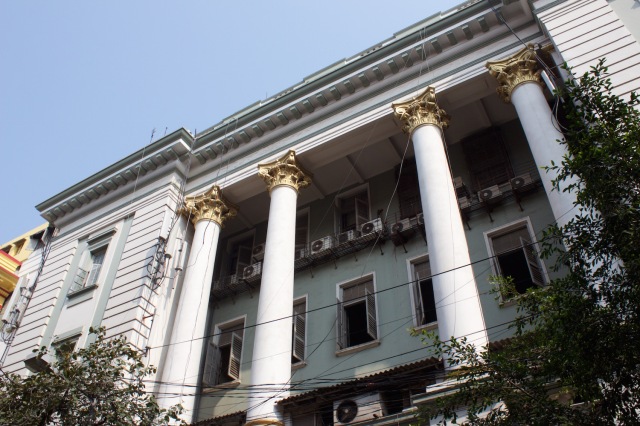 Along Lyon’s Range sits the Turner-Morrison Building, completed in 1925 in a Neoclassical style.

The Calcutta Stock Exchange, built in 1928, sits beside it.

Back on Clive Street are the headquarters of the Eastern Railway, built in 1879.

Across the street sits the Allahabad Bank, built in 1896.

…and the Indo-Saracenic style Chartered Bank Building, built in 1908.

The Royal Exchange comes next. It was built in 1917 and houses the Bengal Chamber of Commerce.

A final glimpse at the Royal Insurance Company building, along Dalhousie Square.

I am a wandering cityophile and pattern-finder who is pathologically incapable of staying in one place for any long period of time. When I do, I see the place from different perspectives, obsessive-compulsively.
View all posts by Kennie Ting →
This entry was posted in Art & Architecture, Cities & Regions, Culture & Lifestyle, Heritage, India, Landmarks & History, Travel & Mobility and tagged Architecture, BBD Bagh, Calcutta, Dalhousie Square, European Town, Heritage, India, Kolkata, Port Cities, The Grand Tour, The Grand Tour of the Subcontinent, White Town. Bookmark the permalink.