Mosaic of Christ Pantocrator (“the All-Powerful”), in the Monreale Cathedral, commissioned in 1174 by King William II of Sicily.

Long before Dream Of A City and my fascination with port cities in Asia, I had been enamoured of the art and the architecture of the Middle East, particularly of the cities that sat at the intersections of Islamic and Byzantine/Christian culture, and those of Iran.

I travelled rather extensively in the early to mid 2000s to Middle Eastern cities – to Istanbul/Constantinople, to the cities of Al-Andalus (Cordoba, Seville, Granada), to Cairo and Beirut and to Shiraz and Isfahan. But I never made it to two cities that for the longest time have captured my imagination – Damascus, in Syria; and Palermo in Sicily.

This past week, I have at last had the chance to visit the second of these cities, specifically to marvel at the wonderfully hybrid Norman-Sicilian, or Arab-Norman-Byzantine culture that emerged in the city during a brief 100-year period (1105 – 1194) when Palermo (and Sicily) was ruled by Norman Kings of the house of Hauteville. 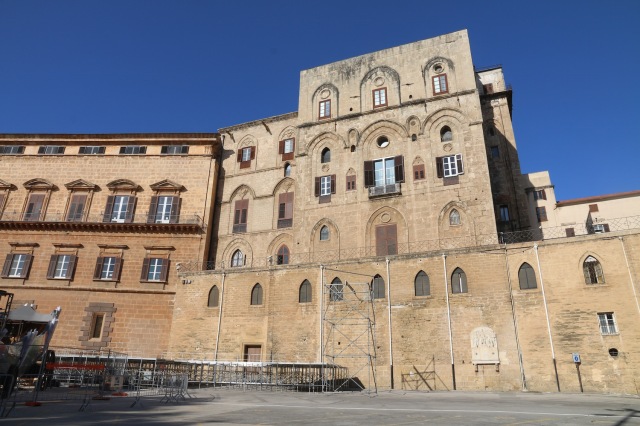 Palazzo dei Normani, or the Norman Palace of Palermo, built upon the 9th century Arab al-qasr (or castle), and dating from the early 1100s. The central structure is what remains of the original Norman palace, built in 1130.

Sicily itself has had a marvellously complex history that involves waves of conquests by foreign armies. Between the 7th to the 9th centuries A.D., the island was a province of the Byzantine Empire, ruled from Constantinople. By the end of the 800s, Sicily had fallen to the Aghlabid emirs of Tunisia, who remained on the island till the Norman Conquest in the early 1100s.

Instead of doing away with Arab culture that had rooted itself in the island, Roger I and his son Roger II, awed by the splendour and sophistication of the Arabic and Byzantine arts and architecture on the island, decided to basically, assimilate. Imposing Christianity nominally as the state religion in the island, the Norman Kings nevertheless promulgated religious tolerance and ruled over a surprisingly multi-ethnic, multi-religious population of Arab Muslims, Jews, Byzantine Greeks, Italians and French (Normans).

The mix of these various cultures – particularly the Arab, Byzantine and Christian Norman cultures – resulted in the development of a unique, hybrid visual and architectural style known as the Norman-Sicilian.  And Palermo – the capital of Sicily – became one of the greatest cities in the world in the mid-1100s, drawing traders, merchants, intellectuals, artists and artisans from all over the Arab and Byzantine worlds to its shores.

[By contrast, Norman England, taken by William the Conqueror in 1072, was a cold, drab and poor place for much of the 1100s.] 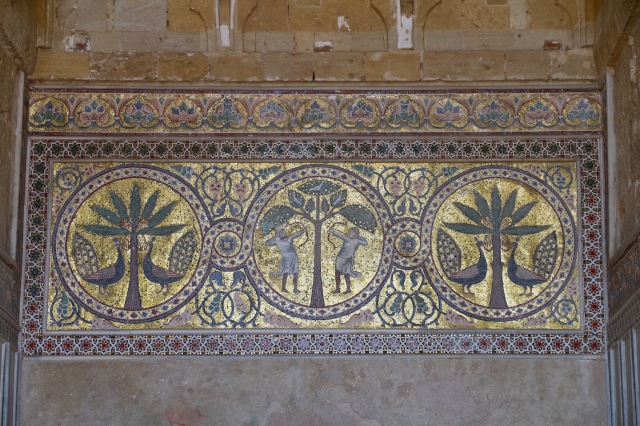 Close-up of mosaics in the Zisa Castle, begun by William I in the 1150s and finished by William II. This was the King’s country palace, in the midst of a vast hunting ground.

This cosmopolitan world of Norman Palermo is featured in Tariq Ali’s brilliant novel, A Sultan in Palermo, which recounts the interaction between the namesake Sultan – Roger (Ruggiero) II – and Muhammad Al-Idrisi, Moroccan-Muslim adventurer and cartographer, who was commissioned by Roger to create one of the earliest maps of the world in 1154.

In the meantime, a glimpse of this world can still be had today in the dozen or so monuments of Norman Sicily that still stand in today’s Palermo. In particular, nine of these monuments are collectively grouped and inscribed as the UNESCO World Heritage Site of Arab-Norman Palermo and the Cathedral Churches of Cefalu and Monreale.

Palermo Cathedral, built in 1185 under the reign of William II is a wonder of cultural syncretism, with successive layers of architecture – Byzantine, Norman, Baroque, Catalan-Gothic – grafted onto one singular form. It also hosts the tombs of the Norman Kings, including that of Roger II.

These monuments are distinguished by their Arab-Norman-Byzantine architectural style, incorporating elements of Arab culture – such as the use of repeating, geometric motifs, “Moorish” arches and muqarnas ceiling vaults – as well as Byzantine Culture – in the exterior domes and floor plans of the churches, as well as in the shimmering gold mosaics accomplished by artisans from Constantinople – into an ostensibly Mediaeval, Norman-French vernacular.

The two most splendid examples of this form of architecture have to be the Palatine Chapel in the Palace of the Normans and the Cathedral of Monreale, with the tiny church of Santa Maria dell’Ammiraglio (or La Martorana) coming in third.  All three churches have their walls and ceilings covered with millions of shimmering mosaics. In particular, the Cathedral of Monreale boasts the largest extant Byzantine mosaic cycle anywhere in the world.

Stepping into these places, one is immediately placed in awe of the stupendous mosaics that cover every single inch of the churches’ upper walls, and are simply mindboggling in their complexity (and in their age – their being almost 1000 years old). One is also transported back to the dream of a city that Palermo was in 1150 A.D., under the reign of Sultan Ruggiero II, of the house of Hauteville.

The Norman Palace and Palatine Chapel 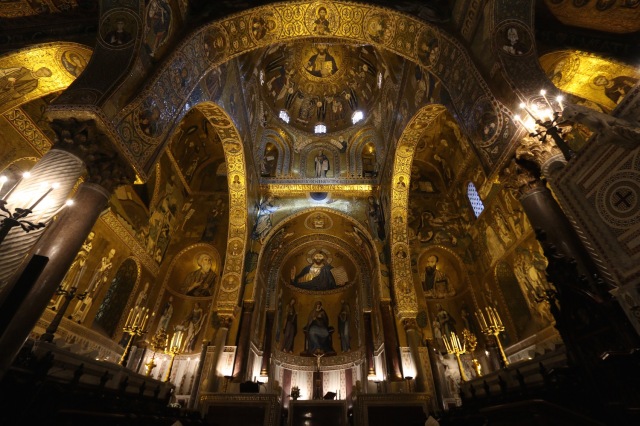 The Palatine Chapel was completed in 1132 by King Roger II. Built into the structure of the Norman Palace, the Chapel is known for its spectacular set of Byzantine-style mosaics. 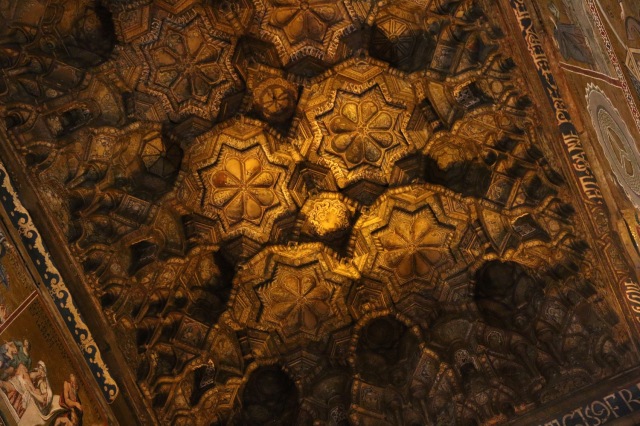 Another distinctive Arab-Norman form in the Palatine Chapel is its muqarnas ceiling. Muqarnas مقرنص, or ‘honeycomb’ vaults, are an Arab-Persian form of architecture. Look closely and you’ll observe that every surface of the muqarnas is also highly ornamented.

Alongside the many key Biblical scenes depicted in exquisite detail in the Chapel are paradisiacal scenes of birds and flowers.

These paradisiacal scenes set in shimmering mosaic reach their apogee in Roger’s Hall – the oldest chamber in the Norman Palace. This is the only extant set of Byzantine mosaics to depict a secular scene – in style, the mosaics draw from an older Persian aesthetic, though they depict more “contemporary” Norman themes of hunting and heraldry.

The Churches of San Cataldo, Santa Maria d’Ammiraglio (St Mary of the Admiral, a.k.a. La Martorana) and San Giovanni degli Eremiti (St John of the Hermits) 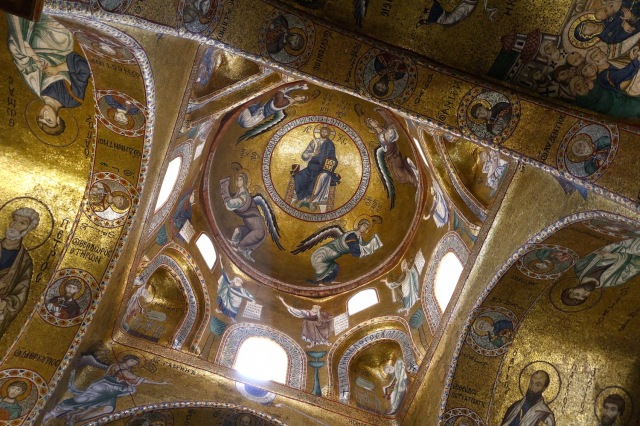 Mosaic ceiling in the Church of Santa Maria dell’Ammiraglio (St Mary of the Admiral), also known as La Martorana. The church dates from 1143 and is named after its founder, who was the admiral and prime minister to Roger II of Sicily. 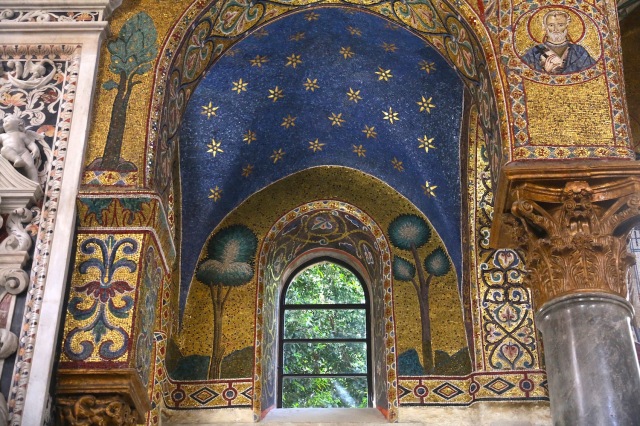 Byzantine mosaic of King Roger II being crowned by Jesus Christ. This is found just past the entrance of La Martorana. © Matthias Süßen / CC-BY-SA-2.5 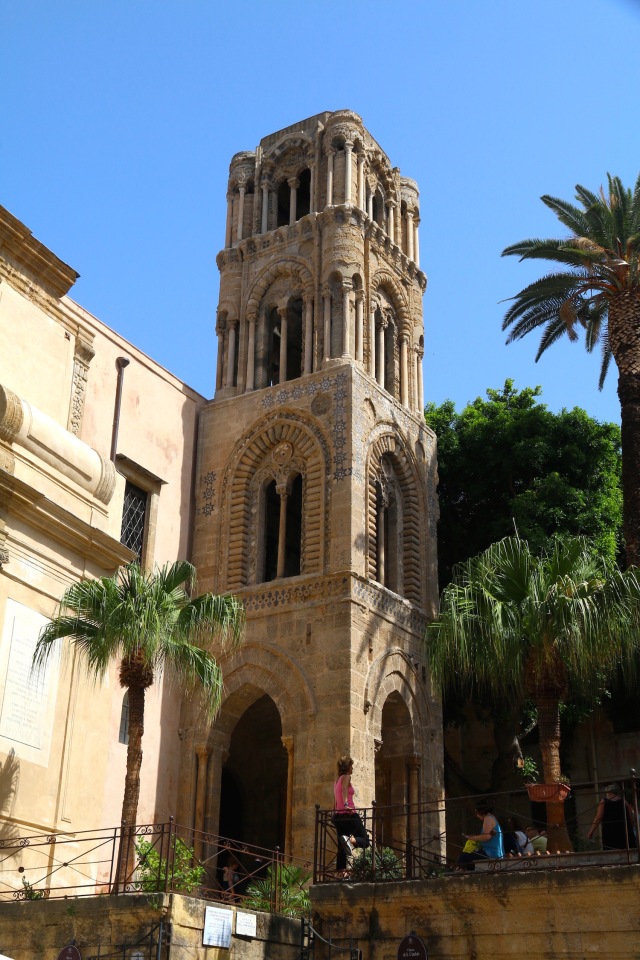 The Arab-Norman bell-tower of La Martorana, which used to be topped by a dome. Note the distinctive arches.

Right beside La Martorana is the Church of San Cataldo, established in 1160. It is a cross-cultural mix of Arab domes, a Byzantine-style cubic form and a Latin-Christian liturgy.

The interior of San Cataldo is simple, demonstrating a Byzantine fondness for a cubic plan and a mediaeval austerity. 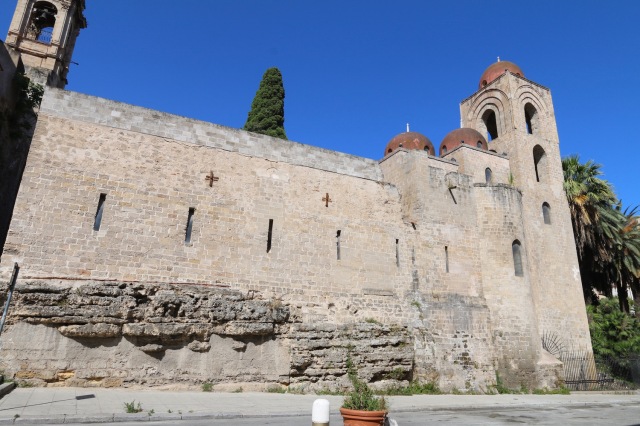 The Church of San Giovanni degli Eremiti (St John of the Hermits) was established in 1136 by Benedictine monks, over a mosque that had earlier on been a Byzantine church. Like the San Cataldo, it presents Arab-style domes on a Norman-Byzantine base structure. Its interior is ruined.

View of the Norman Palace from the Gardens of the Church of St John of the Hermits. At bottom can be seen the church’s Benedictine cloisters.

The Zisa and Steri Castles

Facade of the Zisa castle, built in the 1150s as a summer Palace for William I.

The Zisa castle has the best extant examples of traditional arab-style muqarnas vaulting, even if many of these are restored. This is the spectacular main niche of the castle.

More examples of muqarnas vaulting in the upper floors of the Zisa Castle. 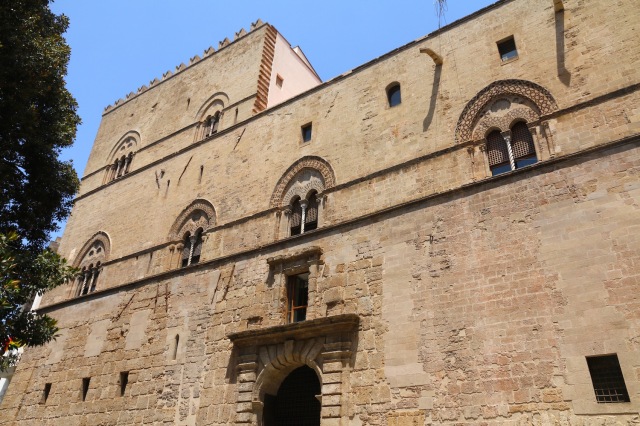 The Steri Castle, or Palazzo Chiaramonte, is not one of the Arab-Norman monuments of Palermo. It was built much later, in the early 1300s by a Sicilian noble family. That said, it also presents elements of Arab-Norman (or rather, Sicilian) architecture.

This is most obvious in the Steri Castle’s window niches, with their Arabic arches and focus on geometric shapes.

It is also evident in the ceiling of the Grand Hall, with their elaborate ornamentation and geometric shapes.

The Cathedral of Monreale

Exterior of Monreale Cathedral, which was built between 1174 and 1182 by William II. It was the last great Byzantine-style church of the Arab-Norman Hauteville dynasty. It sits int he outskirts of Palermo, in the village of Monreale.

The apse of Monreale Cathedral displays an exuberant Arab-Norman-Byzantine style with its interlacing arches and its elaborately inlaid exterior.

But it is what lies within Monreale Cathedral that blows the mind – for here lies the largest extant tract of Byzantine mosaic anywhere in the world. Artists – “foreign talent” – from Constantinople had been brought to Palermo and commissioned by William II to create this masterpiece of mosaic work; and they accomplished this in no more than 4 years.

Close-up of the mosaic series in the santuary, with Christ Pantocrator and saints.

Close-up of the Virgin and Child, in the sanctuary. 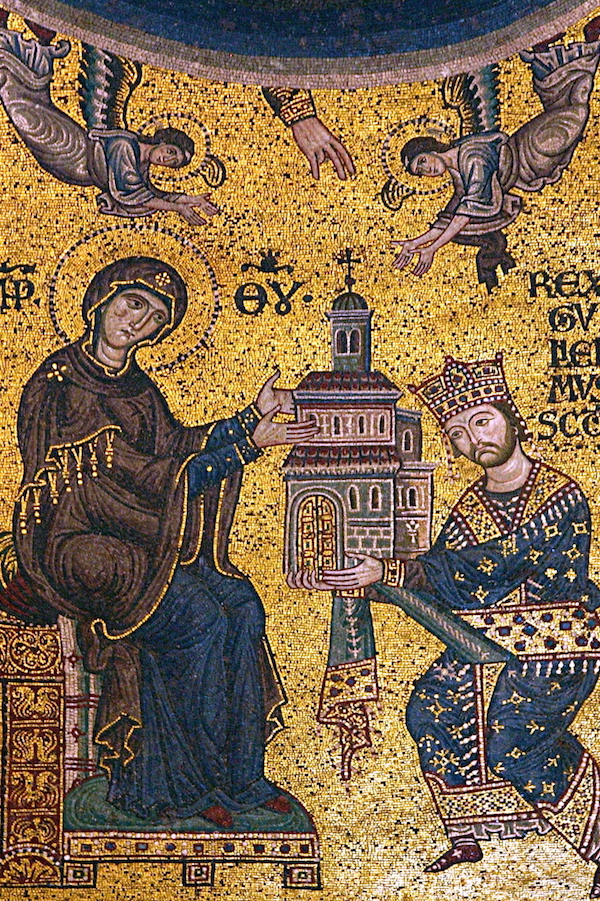 Muqarnas-inspired vaulting in the sanctuary. 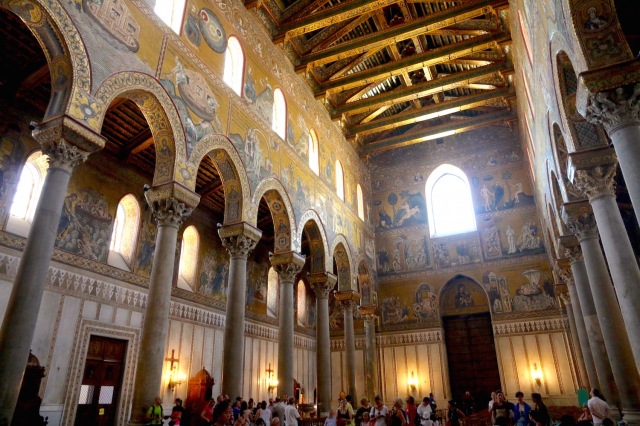 View of the nave, every inch covered with mosaics depicting scenes from the Bible.

Side view of the nave, with depictions from the Bible.

The cloisters of Monreale Cathedral, with the entrance tower to the right. The cloisters were completed in the late 1100s. 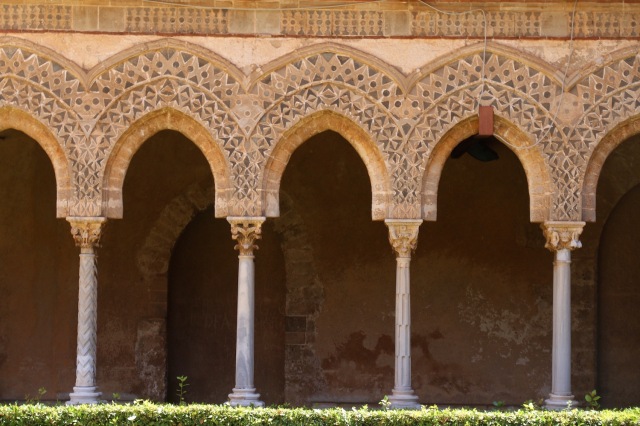 Close-up of the arches in the cloisters, again presenting an Arab-Norman style with their distinctive arches and geometric designs. No two pillars in the cloisters are alike; also, no two capitals are alike, each of them depicting scenes from chivalric and biblical scenes. 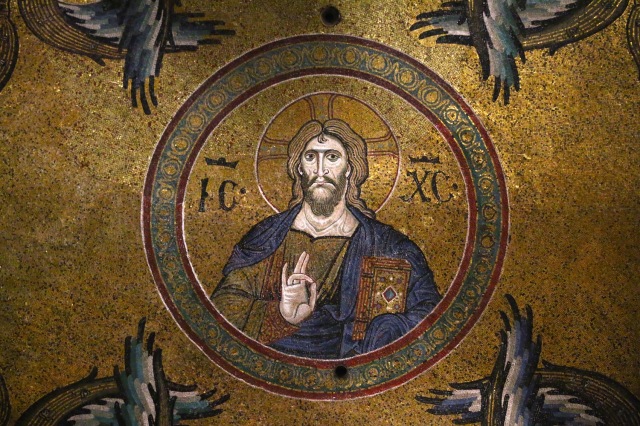 And finally… another view of Christ Pantocrator (“the All-Powerful”) at Monreale Cathedral, concluding this tour of Arab-Norman-Byzantine Palermo.

I was fortunate enough to catch the exhibition, Sicily – Culture and Conquest, at the British Museum in London the following week, completing my exploration of Arab-Norman Sicily.

Sicily – Culture and Conquest, at the British Museum, London.

I am a wandering cityophile and pattern-finder who is pathologically incapable of staying in one place for any long period of time. When I do, I see the place from different perspectives, obsessive-compulsively.
View all posts by Kennie Ting →
This entry was posted in Art & Architecture, Cities & Regions, Culture & Lifestyle, Heritage, Landmarks & History, Photography, The Middle East, Travel & Mobility and tagged Arab-Norman-Byzantine, Arab-Norman-Byzantine Architecture, Architecture, Heritage, Italy, Norman Sicily, Palermo, Roger II, Sicily. Bookmark the permalink.