The Kaminarimon雷門, or “Thunder Gate” – the ever-popular entrance to the Asakusa Shrine (Senso-ji).

Underneath the contemporary glass and steel of Tokyo likes the older city of Edo, the seat of power of the Tokugawa Shogunate. The city became the de facto capital of Japan in 1603, when the Tokugawa Ieyasu consolidated power and became the actual ruler of Japan (the emperor in Kyoto becoming merely a symbolic figurehead).

Edo 江戸 means “the mouth of the river,” and the river in question is the Sumidagawa 隅田川 (Sumida River), which once and still does flow through the heart of what was once Edo. Edo city was built around the former Edo Castle, remains of which are incorporated in the Imperial Palace Complex today.

Edo city proper eventually became known as Shitamachi 下町, or the “low city” because it sat on low-lying ground, but also because it was where the city’s commoner classes resided. The aristocracy lived in Yamanote 山の手 – or the “foothills” to the west of the Edo Castle.

Today, the city of Edo remains as scattered sites and buildings in the Asakusa, Ginza / Shinbashi area and Ueno Park.

Asakusa 浅草 is of course, home to the famous Sensoji 浅草寺 (also known as the Asakusa Shrine), first founded in 645 A.D. and dedicated to Goddess Kannon. It has been destroyed and reconstructed several times, most recently in the aftermath of World War II. It is quite possibly THE most popular tourist attraction in the city. The best way to visit the temple is to arrive by the Sumida River, like many a pilgrim would have done in the Edo period. 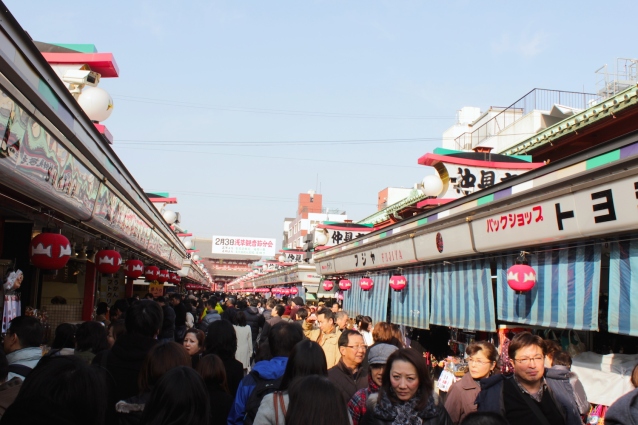 The Nakamise-dori 仲見世通り is the famous shopping street that leads from the Thunder Gate to the Temple proper. It was first established in the 1800s, and is known for the place to buy ukiyo-e 浮世絵, or Japanese prints.

The Hozomon 宝蔵門, or “Treasure Gate” is the second, inner gate through which one enters the temple proper.

The Hondo 本堂, or Main Hall is the Asakusa Shrine proper, and it is dedicated to the Goddess of Mercy (Kannon 观音).

Close-up of the Hondo.

View from the Main Hall to the Treasure Gate.

Around Ginza 銀座 and Shinbashi 新橋, Edo remains in the occasional traditional Japanese wooden house that appears, like an illusion, in and amidst the towering residential and commercial skyscrapers, clinging stubbornly on even as the rest of the city had moved on. Some of these house traditional Japanese-style restaurants and sweetshops that are very popular with Tokyo-ites even day.

Here too stands the un-missable Kabuki-za 歌舞伎座, or Kabuki Theatre – where the bawdy denizens of the Low Cities would have gone to enjoy the evening entertainment in the Edo era. Kabuki has since evolved to become High Art today, and the prominence of the theatre itself is testament to how the artform has become very much part of the Japanese mainstream, continuing to enjoy significant patronage.

The Kabuki-za 歌舞伎座 has stood here since 1889, though this version of it is a brand new structure recently opened in 2013.

Near the area is the Royal Hamarikyu Gardens 浜離宮恩賜庭園, today a public park, but formerly the hunting grounds of the Tokugawa Shoguns.  The grounds house a lovely Japanese teahouse in the middle of the pond that serves delectable matcha and Japanese sweets tea ceremony style. From here, one can take a pleasant boat ride up the Sumida River to the Asakusa Shrine.

Classic view of the Hamarikyu Gardens 浜離宮恩賜庭園, with the Conrad Hotel in the background, and the gardens’ famous teahouse at centre.

Close-up of the Teahouse. 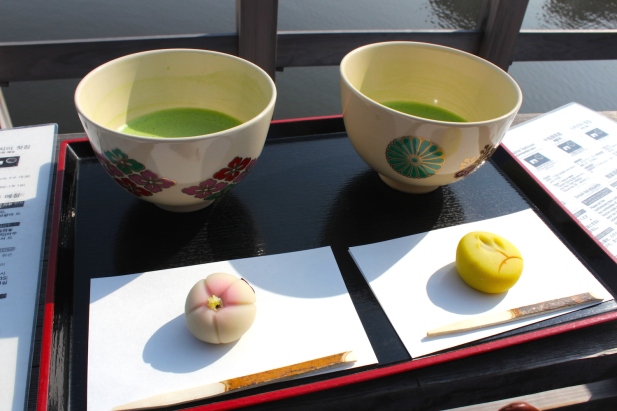 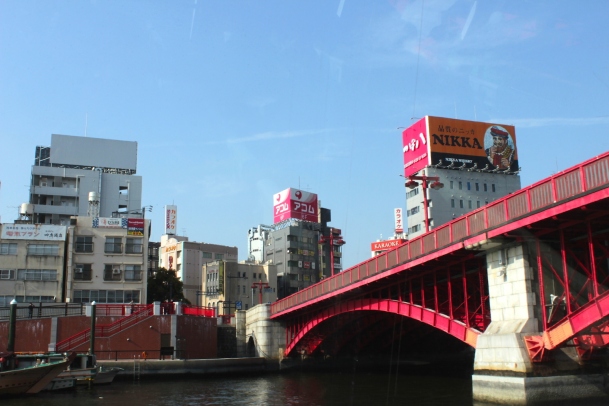 Bridge over the Sumida River.

Finally, traces of Edo also remain in and around Ueno Park 上野公園. Here sits a Tosho-gu東照宮, or shrine dedicated to Tokugawa Ieyasu himself. It is a stunning gold and ebony ensemble that dates back to 1651. Nearby is the Kuro-mon 黒門 or black gates, the splendidly preserved front gates to the former residence of daimyo Inshu Ikeda.

View of the Lotus Pond in Ueno Park.

A sombre Shinto torii marks the entrance to the Tosho-gu 東照宮. 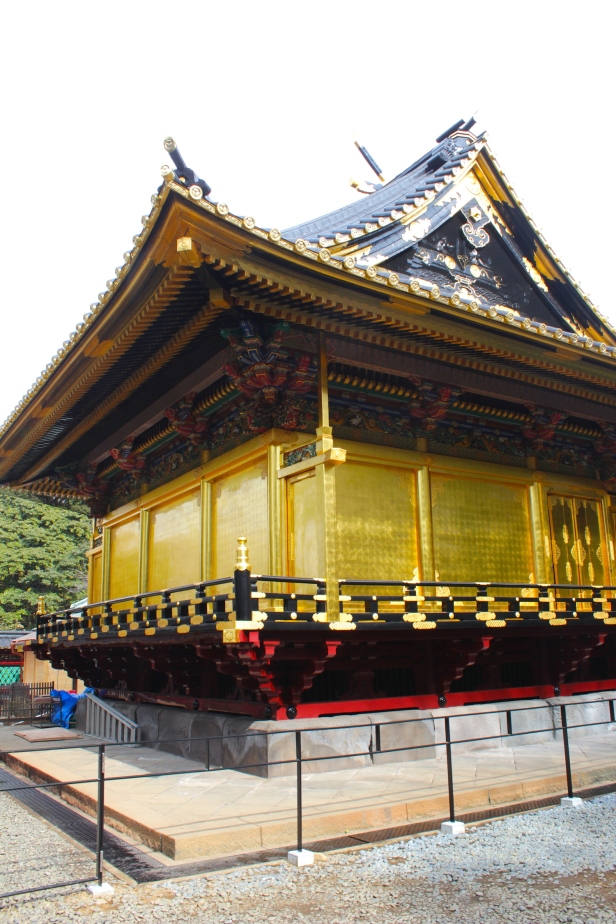 Back view of the Main Shrine in Tosho-gu.

Front view of the Main Shrine in Tosho-gu. 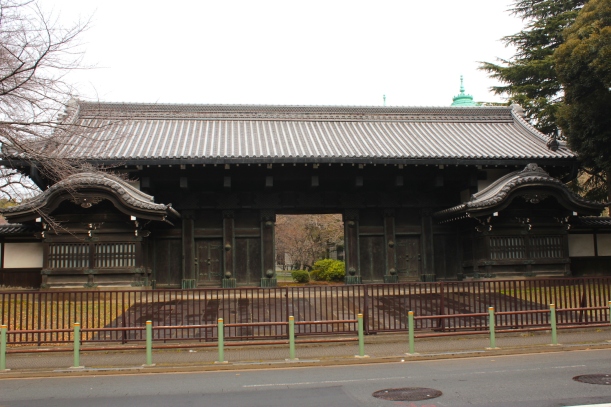 I am a wandering cityophile and pattern-finder who is pathologically incapable of staying in one place for any long period of time. When I do, I see the place from different perspectives, obsessive-compulsively.
View all posts by Kennie Ting →
This entry was posted in Art & Architecture, Cities & Regions, Japan, Landmarks & History, Photography, Travel & Mobility and tagged Asakusa, Edo, Ginza, Hamarikyu Gardens, Japan, Old Edo, The Grand Tour, The Grand Tour of East Asia, The Grand Tour of the Far East, Tokyo, Ueno Park. Bookmark the permalink.