Unlike the rest of the cities on this second Grand Tour, Hankou / Wuhan has no Grand Hotel; or at least, none of the same stature.  It does have two famous historic hotels, both of which were, unfortunately, no longer operational at the time of my visit.  Historical records related to either hotel are also very sparse.

View of the hotel in the precinct it stands

The Xuangong Hotel is situated just outside the British Concession, along today’s Jianghan Road, which was the main shopping street in its day.  According to Chinese records, it didn’t originate as a hotel, in fact, but was a luxury department store, erected in 1928.  By 1931, it had been turned into a hotel, and became THE hotel of the city.  Here it was in 1960, that Chairman Mao was served Wuchang Fish, and then quipped his famous saying “I just swam in the waters of Changsha, and then I ate Wuchang fish.”

The hotel is presently shuttered and on the verge of a major renovation that is due to return it to its former glory.  It stands, a beautiful Renaissance style building, amidst one of the busiest shopping intersections along the pedestrianised Jianghan Road.

Entrance to the hotel 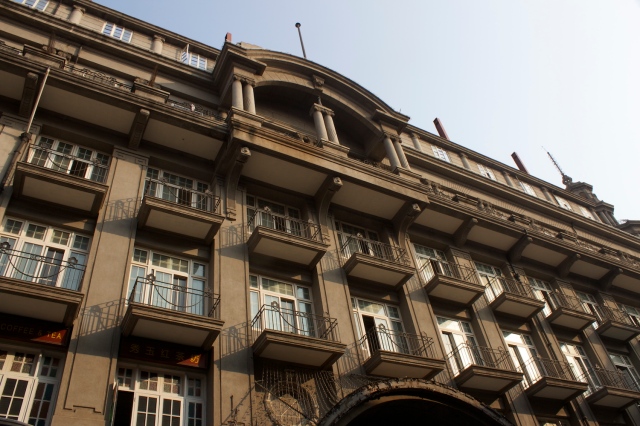 The other famous hotel in the city is the Hôtel Terminus, in the French Concession.  As its name implies, it sat near the terminus of the Beijing Hankow Railway line, near to the Hankow Railway Station, which still exists as today’s Dazhimen Station.

The Hotel was possibly built at the turn of the 19th century.  It is a surreal Beaux-Arts vision that stands across from the Railway Office Building.  Today, the Jianghan Hotel (as it was recently named) stands empty and shuttered; and it is unclear what is to happen to it.

Possibly an Annex to the hotel.

I am a wandering cityophile and pattern-finder who is pathologically incapable of staying in one place for any long period of time. When I do, I see the place from different perspectives, obsessive-compulsively.
View all posts by Kennie Ting →
This entry was posted in Art & Architecture, China, Cities & Regions, Culture & Lifestyle, Landmarks & History, Photography, Travel & Mobility and tagged China, Hankow, Hotel Terminus, The Grand Tour, The Grand Tour of the Far East, Wuhan, Xuangong Hotel. Bookmark the permalink.