Xiamen was a very familiar city.

I felt a 親切感– a strong sense of warmth and belonging – upon arriving into the city centre. This despite the fact that I had never been to the city before.

Perhaps I should explain…

My maternal grandfather – my mom’s dad – originated from Xiamen 廈門, which, in his Fujian/Hokkien dialect, is pronounced EH-MNG, and accounts for the island’s traditional English name of Amoy. Well…technically he hails from the island of Kinmen 金門 (or Quemoy), which are today administered by Taiwan, even though it is situated in the very heart of Xiamen harbour.

I grew up listening to and understanding this specific strand of the Hokkien dialect, spoken between my grandfather and my mother (this is quite literally my “mother tongue”!). And so it came as a very pleasant surprise to hear the lilting Xiamen Hokkien dialect spoken everywhere I went on the island.

(Almost-)white sandy beaches ring the island – this one is part of the campus of Xiamen University.

Xiamen is an island city, like Singapore; and it is one of the most idyllic and livable cities in China. Now this is all relative, of course. The city-island is still very much a polluted metropolis, like its sister-city Guangzhou down south. But there are still tracts of the island that are quiet and laid back.

For example, the island is surrounded by a string of (almost-)white sand beaches, fronted by (almost-)turquoise water and framed with swaying palm trees. The beaches are thronged with locals, naturally, but the throngs here seem somewhat more well-behaved than elsewhere, and the atmosphere is never too overwhelming. (Or perhaps it is I who have grown accustomed to China’s crowds). 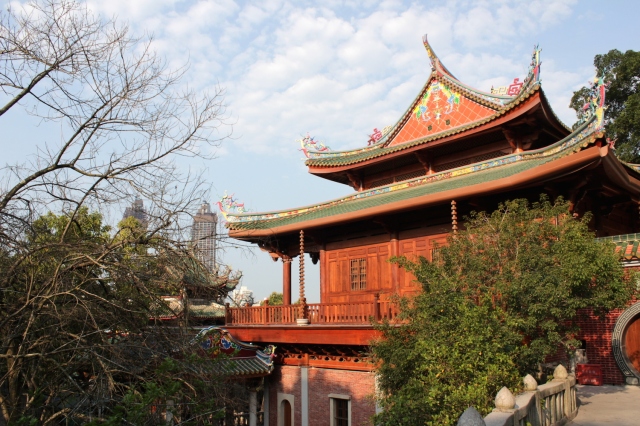 One of the temples in the South Putuo Temple complex, perched on the slopes of Mount Putuo.

Not far from the sea lies the mountains. And here too, Xiamen offers respite from the madness of modern China, if only for a couple of hours in the early morning before the hordes of tourists arrive.

At the foot of the legendary Mount Putuo 普陀山 sits the equally legendary South Putuo Temple 南普陀寺, which has existed here since the Tang Dynasty (700 A.D.). The temple sprawls along the south face of the mountain, and offers a quiet and contemplative walk through an ancient, verdant path to the top of the mountain.

At the halfway point (I admit I was in no shape to scale the whole mountain!), there were stunning views of the city of Xiamen, Xiamen Harbour, the island of Gulangyu and the iconic Xiamen University, founded by an émigré businessman, Mr Tan Kah Kee, who was one of the most illustrious representatives of the Chinese Diaspora in the Southern Seas region (what the Chinese called Southeast Asia), and who also founded my own High School in Singapore – yet another aspect of the city that was familiar and strangely moving!

I wasn’t the only one moved by the view. A pious monk from the South Putuo Temple had also hiked his way up the mountain, and there, three feet from me, he genuflected and gave thanks to Buddha for all that he had. 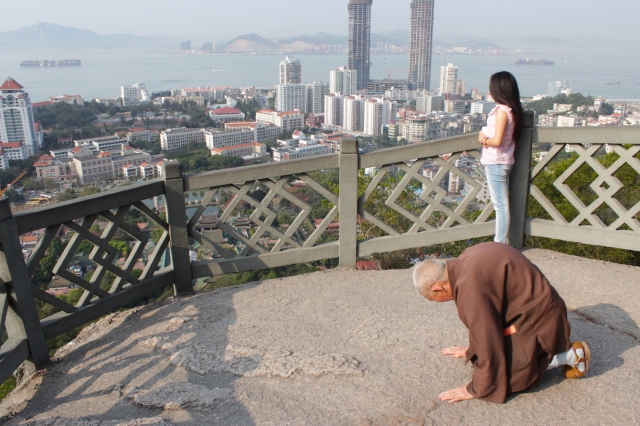 A pious monk genuflecting and giving thanks on Mount Putuo.

Amoy was one of the original five treaty ports forced open by the British through the Treaty of Nanking in 1842, signed in the aftermath of the First Opium War. For about a hundred years till the outbreak of World War II, the British would rule this territory, opening it up to trade by other European nations.

Traces of the city’s colonial past still exist today, in the former Amoy Bund and the maze of streets that form the city’s old commercial quarter; but more importantly, on the island of Gulangyu 鼓浪嶼 (called Kulangsu in the old days), which was where the European consulates and residences were concentrated. 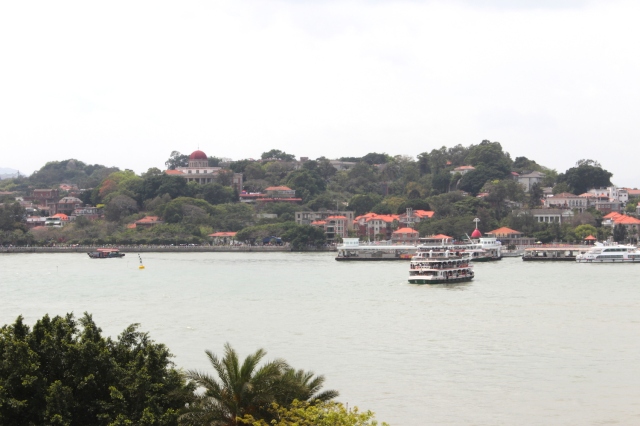 Gulangyu Island and the island ferry.

Miraculously, almost all of the colonial architecture on Gulangyu Island has survived, and the island itself is one of the most popular tourist attractions not only in the city, but in all of China. Everyday, tens of thousands of Chinese tourists throng its old cobblestoned streets, filling to the absolute brim the tiny ferries that ply the narrow straits every ten minutes.  (And causing me immense concern each time I took the ferry because I was convinced the vessel would sink!)

To beat the crowds and get the most out of the historic ambience, one must either start very early in the morning, or better yet, stay overnight on the island, in one of the quaint hotels and hostels occupying refurbished colonial villas.

A ubiquitous sight – wedding photoshoots in the shadow of what the Europeans left behind, Gulangyu Island.

Amoy is also significant in the history of Asia because it, like Canton, is where many Southeast Asians of Chinese descent originated from. In the 19th and early 20th centuries, thousands of Hokkiens from Xiamen and the Fujian province emigrated south to Taiwan and Southeast Asia, resulting in Hokkien being one of the most commonly spoken Chinese dialects in the two regions.

Many of these overseas Chinese made it rich in their adopted hometowns in Singapore, Kuala Lumpur or Manila, and returned to Amoy to build majestic villas in the island of Gulangyu and elsewhere.

The most significant of these returning emigres was Mr Tan Kah Kee 陳嘉庚 – already introduced – whose passion was for education, and who founded the Xiamen University 廈門大學 and Jimei University 集美大學 in Amoy, and the Overseas Chinese High School 華僑中學 in Singapore (my alma mater!)

Tan precipitated the evolution of a new kind of Chinese architecture, integrating traditional Chinese architectural elements such as elaborate, sloping roofs, with a European layout and foundational style that used brick walls, balconies and balustrades. Many specimens of this form of architecture still remain in Xiamen, but sadly, the War and the subsequent Communist Revolution stunted any further evolution in this form of Modern Chinese Architecture.

The legendary Mr Tan Kah Kee, Overseas Chinese businessman and philanthropist, native of Amoy and Singapore, founder of the Xiamen University and my own alma mater, The Overseas Chinese High School, Singapore.

Only one more familiar aspect of Xiamen/Amoy remains to be pointed out, and that is Xiamen cuisine, which has many traditional dishes that made their way south to Singapore and have become typical (招牌) dishes here too. Poh piah (vegetarian crepes), mee sua soup, prawn mee soup, cai por (pickled radish) omelette, fishball soup, blood cockles… the list goes on.

Seafood, in particular, was a highlight. Being an island city (like Singapore), seafood was exceptionally fresh and (unlike Singapore) exceedingly varied and cheap.

I feasted myself silly, thinking… What a home away from home Xiamen is! Why haven’t I visited before? Why haven’t more Singaporeans come visit?

Well… at least I’m here now, was my answer.  And I’m definitely returning. 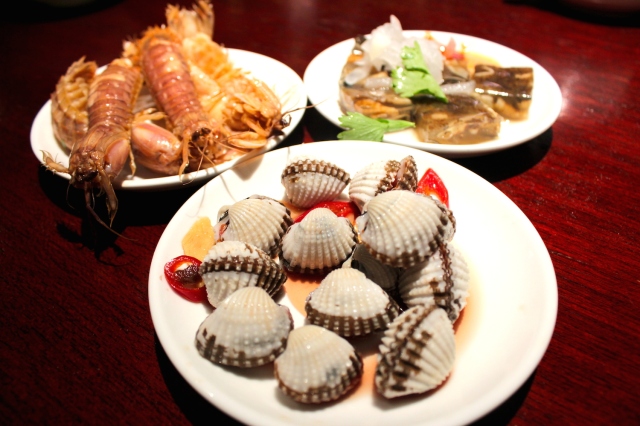 I am a wandering cityophile and pattern-finder who is pathologically incapable of staying in one place for any long period of time. When I do, I see the place from different perspectives, obsessive-compulsively.
View all posts by Kennie Ting →
This entry was posted in Art & Architecture, China, Cities & Regions, Culture & Lifestyle, Landmarks & History, Photography, Sociology & Urban Studies, Travel & Mobility and tagged Amoy, China, Familiar City, Gulangyu, Hokkien, Kulangsu, Mount Putuo, OVerseas Chinese, Tan Kah Kee, The Grand Tour, The Grand Tour of the Far East, Treaty Port, Xiamen. Bookmark the permalink.