The Canton Custom House (1914) is the oldest surviving Customs House in China. Not an ideal view – but then there isn’t really an ideal angle to capture it today.

Of all the port cities on the Grand Tour, Canton – situated at a strategic location on the Pearl River – is by far the greatest and the most ancient, having been mentioned as a major port since the Tang Dynasty (7th century AD). It was a true global city – a cosmopolitan, multi-cultural, polyglot melting pot of a metropolis with traders from all over East Asia, India, Persia, and the Arab and Malay worlds.

For a good eight centuries before the advent of the Europeans, Canton, and its sister city Quanzhou, in Fujian province, would reign supreme as the foremost trading capitals in China. In the famous Arab traveller, Ibn Battuta’s 14th century travelogue, both cities were mentioned as fabulous, wealthy cities with magnificent boats and spices from all the known world.

The Portuguese arrived in the early 1500s, drawn, as in the case of Malacca, by Canton’s fabled wealth. Mistaking the port city itself for the province in which it sat, they called the city Cantão (after the “Guangdong” province), and the name stuck, even as the Portuguese themselves were chased out of Canton and resettled in Macao by 1557.

Canton’s history as a major port of trade with European powers began in 1685 when the Kangxi Emperor opened the seas to trade. Canton became one of half a dozen ports of call for European ships. In 1757, threatened by a wave of missionary activity in China, the Qianlong Emperor decreed that henceforth, all foreign trade with China would be limited to Canton only, setting the stage for the city’s renaissance.

Panorama of the “Thirteen Factories”, or “Thirteen hong” (十三商行).

By the 1700s, Canton had once again become a major global city and port, by virtue of the famous Thirteen Factories (also known as the Thirteen hong 十三商行).  These were thirteen European merchant houses and residential quarters situated beyond the walls of the city of Guangzhou itself, within which the Europeans were allowed to pursue their commercial activities.

These “factories” were forerunners of the subsequent treaty ports and foreign concession system of colonization that would appear in the 1800s; and they were truly international – the British, the Dutch, the French, the Spanish and the Portuguese were here; so were the Americans, the Danish, the Belgians, the Germans and the Swedes.

The First Opium War ended all that. Canton was the epicentre of the War. Here it was that the Qing Dynasty bureaucrat, Lin Zexu (林則徐), made a proclamation banning illegal trade in opium. Here it was – or at least close enough, at Humen Town (虎門鎮) – that he called for the destruction of 20,000 chests of opium in 1839. And here it was that War was inevitably declared and waged.

By 1842, the British had defeated the Chinese and captured the city. China was forced to sign its first unequal treaty – the Treaty of Nanking – which saw five treaty ports, including Canton, re-opened to foreign trade.  That wasn’t all.

The Second Opium War saw the destruction of the Thirteen Factories and European trade activities were relocated to Shameen Island (沙面島) – a tiny sandbar in the vicinity.  Commercial activities resumed as before, but Canton, having lost its monopoly on Chinese trade, would never again regain its status as the premier port and global city in China.

The narrow canal separating Shameen Island to the right, from the “mainland” of Guangzhou.

That said, it became a global city of a different kind – from its humble shores (and the shores of its sister city Hong Kong), hundreds of thousands of Cantonese would leave to find a new life in Southeast Asia, Europe and in far-flung America, settling in other open port cities under British rule.

They would form a large majority of the Overseas Chinese diaspora, ensuring that Cantonese continues to be one of the most widely spoken languages in the world today; and that Cantonese culture, food and civilization is most readily recognised as quintessentially Chinese outside of China. 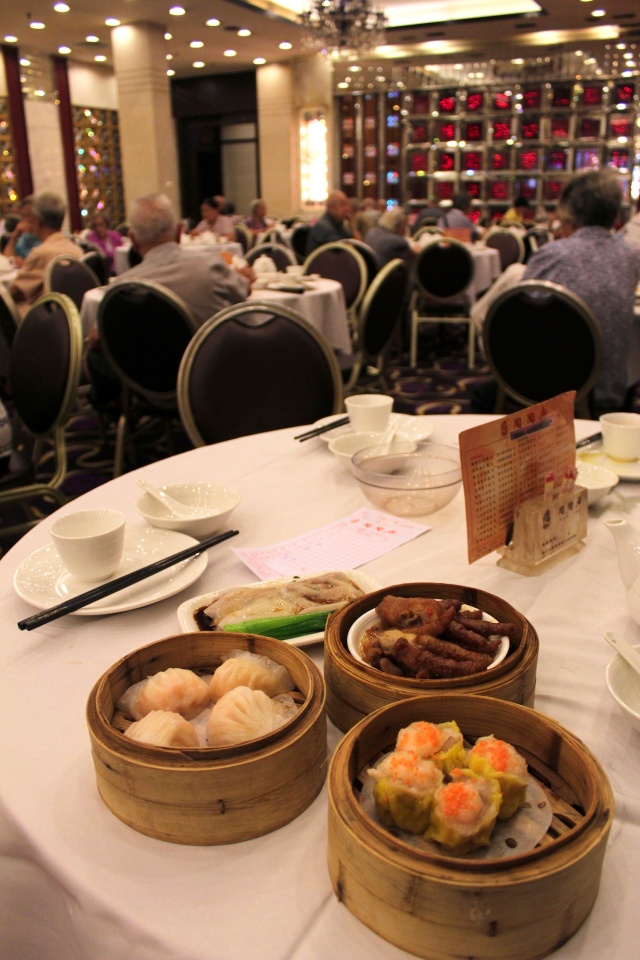 Yumcha 飲茶 (also known as dimsum 點心), A familiar sight all over the world, from Singapore to San Francisco to São Paolo.

While the title of China’s premier port and global city belongs to Shanghai, today’s Guangzhou comes a close second.  It has in recent years become “the factory of the world” – just another way of saying “global city.” Almost everything that says “made in China” was made somewhere here, in the larger Guangzhou metropolitan area.

It is once again, also, becoming a cosmopolitan, polyglot metropolis, though not without some controversy. In particular, Guangzhou is home to China’s largest population of Africans, some 200,000 and growing, who flock here legally and illegally to trade and find a new life.  While there is a long way to go before Canton reverts to the melting pot it was a thousand years before, it is, of all of China’s port cities, the one most likely to do so. Global-ness and cosmopolitan-ness are, after all, part of its heritage.

Africans in the new global city of Guangzhou.

I am a wandering cityophile and pattern-finder who is pathologically incapable of staying in one place for any long period of time. When I do, I see the place from different perspectives, obsessive-compulsively.
View all posts by Kennie Ting →
Gallery | This entry was posted in Art & Architecture, China, Cities & Regions, Culture & Lifestyle, Landmarks & History, Photography, Travel & Mobility and tagged Canton, China, Guangzhou, The Grand Tour, The Grand Tour of East Asia, Treaty Ports. Bookmark the permalink.