The facade of The Peninsula Hotel.

While in Hong Kong, reside at the legendary Peninsula Hotel. There is simply nowhere else quite as nostalgic and evocative. The minute the familiar and iconic bellboy – draped in all-white livery – opens the large glass doors and ushers one inside the hotel, one is enveloped in a kind of warm glow of history, akin to slipping back in time to the heyday of luxury travel – the 1920s.

The hotel was established in December 1928, at the very height of the long-distance luxury travel phenomenon. In those days, Kowloon was the centre of international tourism in Hong Kong.  Cruise liners on their round-the-world journeys stopped off at the Kowloon Harbour, and the nearby Kowloon terminus of the Canton-Kowloon Railway saw cross-continental travellers arriving from all over China – some of them would have taken the epic journey across Russia on the Trans-Siberian Railway.

The Dining Room and the iconic Bellboy.

In a bid to firmly ensconce myself in those glory days of travel, I booked myself into a modest Deluxe Room in the original low-rise wing of the hotel, rather than into one of the more spectacular rooms-with-a-view in the 30-storey Peninsula Tower Wing, added in the 1990s. I couldn’t have made a better choice. My room was situated at the very corner of the hotel building and faced out onto bustling Nathan Road, affording me absolute privacy and a vicarious view upon the world outside. In the evenings, after a long and luxurious bath, I would curl up in my robe on the couch with a glass of red wine, observing the spectacle of Hong Kong (or Kowloon, rather) happen, right beneath my window. 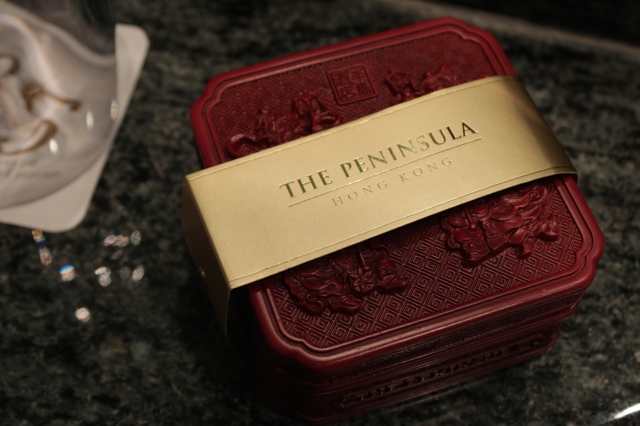 The highlight of any stay at The Peninsula is High Tea in its Grand Dining Room and lobby. Unlike many other of its contemporaries (such as the Raffles Hotel), the Peninsula has retained its main Dining Room in its lobby, resulting in that welcoming and warm buzz of activity that the guest experiences the minute he or she walks into the hotel.

High Tea at the Peninsula

From a far corner of the opulent expanse, decorated in Renaissance style, a string quartet plays a waltz by Strauss. I am seated at my table in amidst dozens of other guests and Hong Kong residents, speaking Cantonese and a host of other European languages. The tea itself is…well…passable. But the experience is magical – I am transported back in the day when the likes of Somerset Maugham, Charlie Chaplin, Douglas Fairbanks and other luminaries would have passed through these shores. I open my manuscript book and take notes, looking, so I imagine, not unlike a wandering novelist on a Far Eastern segment of his Grand Tour around the world.

After tea, I spent the rest of the afternoon lounging on the deck of The Peninsula’s spectacular pool-with-a-view, together with two other friends who coincidentally were visiting Hong Kong at the time. We stood, nursing glasses of wine as the sun set in the distance, and that impossible skyline turned from silvery-green to bright neon shades, and thought to ourselves, how like a romance our lives were, here, together again after so many years, reliving the past, and sharing our hopes for the future, with all of Hong Kong as our movie set. If only time would stop, and we could lie here savoring the moment a little longer…

But no, the next morning we would all go our separate ways – me onwards to my next stop on the Grand Tour… Macao.

Close-up of the Peninsula’s logo. 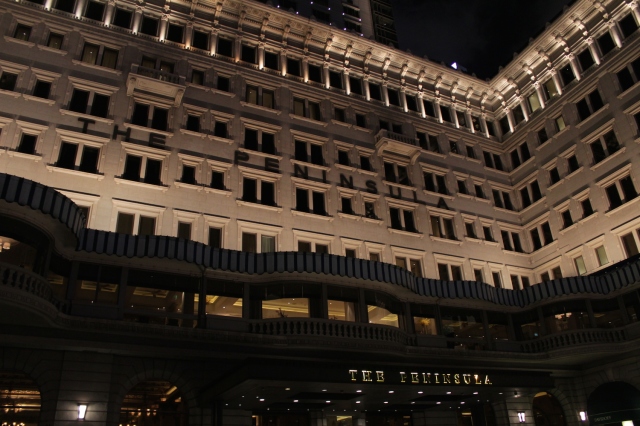 The Peninsula at night. 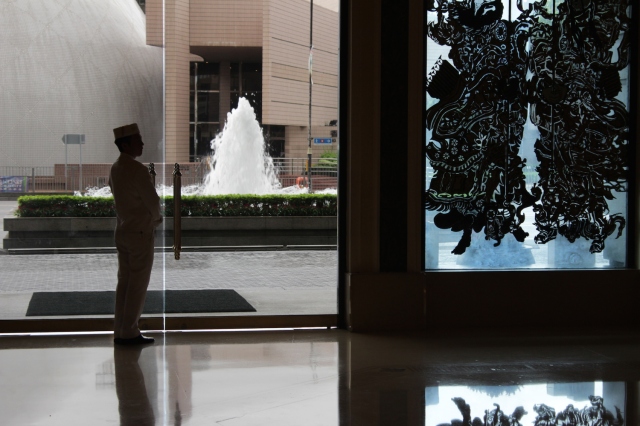 A parting view of the iconic bellboy

I am a wandering cityophile and pattern-finder who is pathologically incapable of staying in one place for any long period of time. When I do, I see the place from different perspectives, obsessive-compulsively.
View all posts by Kennie Ting →
This entry was posted in Art & Architecture, China, Cities & Regions, Culture & Lifestyle, Landmarks & History, Literature & Philosophy, Photography, Sociology & Urban Studies, Travel & Mobility and tagged Hong Kong, Kowloon, The Grand Tour, The Grand Tour of East Asia, The Peninsula Hotel. Bookmark the permalink.