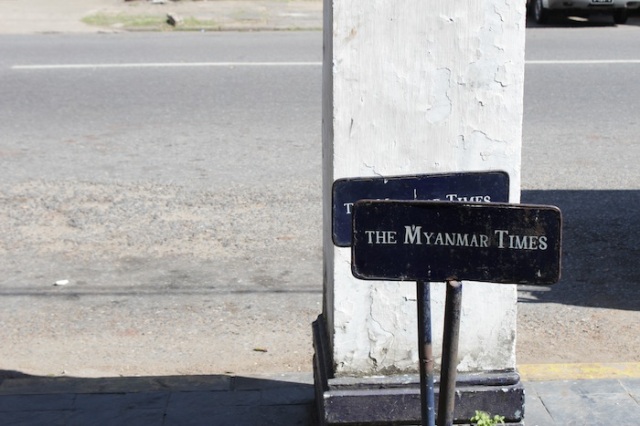 The offices of The Myanmar Times.

“…[a]n agreeable life, luncheon at this club or that, drives along trim, wide roads, bridge at this club or that, gin pahits…then back through the night to dress for dinner and out again to dine with this hospitable host or the other, cocktails, a substantial meal, dancing to a gramophone or a game of billiards…”  W. Somerset Maugham, The Gentleman in the Parlour

The times, they are a changing’

Growing up as a young adult in the ‘90s and ‘00s, there were only two things that came to mind when one mentioned “Burma.” The first was the faceless (military) junta.  The second was the familiar face and figure of Aung San Suu Kyi.  These two facets of Burma were always presented as being hopelessly opposed to each other. As in, there could not possibly be a Myanmar with Aung San Suu Kyi in it; and conversely, there could not be a Burma with the junta.

In the last two years alone, something close to miraculous has happened. And that is the resolution of this seemingly hopeless dialectic into a single unifying truth: there could be a Myanmar with both junta and Aung San Suu Kyi, and in fact, this was a Myanmar that had to be so constructed, by necessity.

It all happened when Ms Aung San was rather suddenly set free in 2010, after 15 years of house arrest; and the momentum of this singular event was followed up less than two years later with the lady’s formal investiture as a Member of Parliament (in her capacity as leader of the opposition National League for Democracy Party).  Now sceptics may say that this was simply a result of the junta bowing to international pressure, and Ms Aung San’s own gracious concessions to the former’s less than ideal conditions.  But I say that it takes two hands to clap, and if Ms Aung San was the left, then the junta, led by the reform-minded President Thein Sein, was a resounding right. 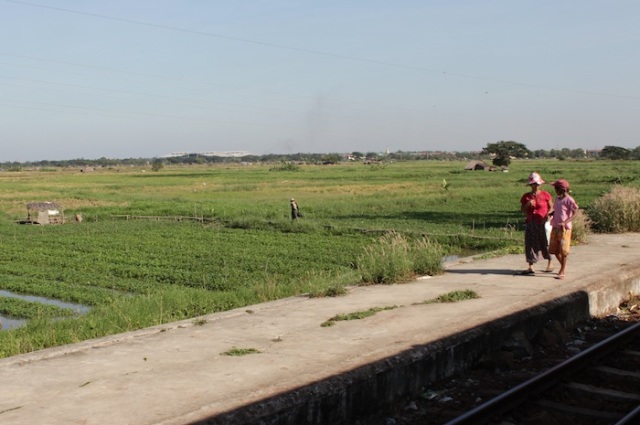 Business as usual in the rural outskirts of Yangon (view from the Yangon Circular Train).

On this, my first trip to Yangon (and to Myanmar), I had the chance to witness, first-hand, how this change was impacting the nation and its people. Which was to say, not very much, or at least, not very obviously or not yet.  There wasn’t any uncertainty in the air. But neither was there an exuberant glow of optimism. Rather, life continued as usual, as it had always been: vibrant, riotous, entrepreneurial and surprisingly multi-cultural (more of this in just a moment). People were open enough when you talked to them, but, in general, somewhat blithely oblivious to the general state of events. I felt constantly like I was more excited about the changes in Burma than the Burmese themselves.

Just a week before I arrived, US President Barack Obama had addressed an assembled crowd of students on what was the first ever visit by a sitting US President to Burma. On my way in from the airport to the hotel, my taxi coasted along the shores of the beautiful Inya Lake, where the sprawling, colonial-era campus of the University of Rangoon sat.  As we passed by the campus, my taxi driver rather lackadaisically pointed out a crumbling, hulking building within which Obama had apparently delivered his address. It was the “Graduation Hall,” he said, “where students came to graduate.”  And that was that.  There wasn’t another word on the matter.  We continued talking about where I came from (“No I’m from Singapore, not Japan”), and where he originated from (“I was born in the Shan States, but I have lived throughout Myanmar”); but the conversation didn’t stray back towards where it started off. There was no talk about change, as if it was completely irrelevant.

The next evening I got to talking to a expatriate academic, however, and he informed me, most emphatically, that change had indeed taken place, though it may not be so obvious to the visitor passing through.  For starters, all the big-wigs in the Government, who had grown fat on political patronage from local companies wishing to do business in the country, had woken up one morning to find that they no longer had a monopoly over the local markets, what with MNCs clamouring to enter and all. There had also been a very public protest by Buddhist monks against the construction of a new mine in North Burma by a Chinese company.  After a spirited crackdown by the police, during which some monks had been brutally assaulted, President Thein Sein had actually come forward to issue a public apology for the assault.  Clearly, the times they were a changing, even if day-to-day life in Yangon hadn’t yet registered any significant shift.

The old market, and the many diverse peoples and religions on display, on a single morning.

Eventually, I had to admit that I was far less taken in by the shifting political climate, than by this surprisingly multi-cultural and multi-religious day-to-day life in Yangon.  Not knowing very much about Burma (and for good reason), I had come expecting a population that would be primarily Burmese and Buddhist.  Imagine my surprise, when, upon taking to the streets of the old town, I found myself in the midst of one of the most cosmopolitan cities I had yet seen in Southeast Asia, quite on par with Singapore where diversity and tolerance was concerned, at leat outwardly.

In the old town, often sitting on adjacent blocks, were a dizzying array of religious buildings – Burmese temples, Chinese Temples, Hindu Temples, Anglican Churches, Catholic Churches, Sunni Mosques, Shia Mosques, Jewish Synagogue and even an Ismaili khanaqah. The faces of the people were similarly multi-hued, with South Indians, of both Hindu and Muslim persuasion, being the most obvious minority group (the Chinese often looking largely indistinguishable from the Burmese themselves). I found, to my delight, that roti prata – a kind of pastry and curry dish that is a staple of South Indian food in Singapore – also featured ubiquitously as street food in the many alleyways and markets of the old quarter! As did chicken rice (another staple of dish of Southern Chinese origins in Singapore), albeit in a more rough and ready form.

The High Court of Rangoon, an imposing Victorian confection in red brick.

This multi-culturalism is a lingering after-effect of the heady days of British Burma, when Yangon, or Rangoon, rather, was the political and economic capital of the territory, and (for a time) the furthest-most point of the British Raj. The British were here for just under a century (1852 – 1942), but inscribed into the urban fabric, some of their most spectacular and over-the-top pieces of imperial architecture this side of the Indian Subcontinent. Along Strand, Pansoedan and Merchant Roads near the Yangon River waterfront sit some of the most impressive and monumental civic and commercial buildings the British built in the entire region, trumping those in Singapore. Many of these buildings still retain their names – “Rander House”; “Ascott & Co.”, “Government Telegraph Office” – evoking a time when Rangoon had been a key gateway to international trade and commerce, and, as a result of that, an extremely wealthy city.  For signs of this past wealth, step out into the suburbs of Ahlone, or Inya, where there is still a proliferation of grand colonial-era villas standing in relatively good condition.  Today, these areas are a kind of latter-day Embassy Row – most of the nation’s foreign embassies have occupied and refurbished many of these once-dilapidated properties.  Sixty years ago, however, these would have been private domiciles of British Civil Servants and wealthy resident merchants.

A Buddhist monk gazing on the past (or is it the future?) at the Shwedagon Pagoda complex.

Buddhism, however, remains at the heart of Burmese culture and identity.   The Buddhism practiced here, as with most of continental Southeast Asia and Sri Lanka, is Theravada Buddhism infused with traces of Brahmanism. At the Burmese national symbol – the magnificent and somewhat surreal Shwedagon Pagoda in Yangon, I saw the usual array of Buddhist icons alongside statues of celestial beings and mythical beasts from the Yama Zatdaw, the Burmese incarnation of the Ramayana.  I also got to witness just how deep the religion runs in Burmese everyday life. Civilians far outnumbered the monks worshipping at the Pagoda, and I observed many of the former building karma by slipping alms to latter, sitting quietly at prayer amidst the forest of smaller pagodas and pavilion-temples that dotted the entire complex.

Washing the Buddha at the Shwedagon Pagoda complex.

The most intriguing practice I observed, however, had to be the ritual washing of the Buddha.  I stood transfixed for some time as ordinary citizens of all ages and backgrounds stepped up in an orderly manner to the dozen or so strategically placed white statues of Buddha around the central Pagoda, and proceeded to douse the statue with cup after cup of holy water.  Here, I thought, encapsulated in this ancient practice, was the reason why the British colonial project was doomed to failure, and why Obama was a distraction, rather than a sign of change.

I stepped up in an attempt to try my hand too at Buddha-washing, but the collective stares of the assembled pious, unimpressed by my garish foreign-ness, told me only too clearly that I should not be taking this ritual lightly.  I deferred to their timeless wisdom. 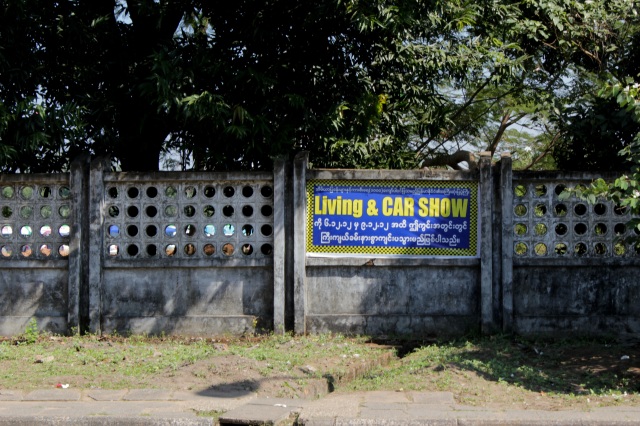 I am a wandering cityophile and pattern-finder who is pathologically incapable of staying in one place for any long period of time. When I do, I see the place from different perspectives, obsessive-compulsively.
View all posts by Kennie Ting →
This entry was posted in Art & Architecture, Cities & Regions, Culture & Lifestyle, Landmarks & History, Photography, Travel & Mobility and tagged Burma, Burmese Days, Myanmar, The Gentleman in the Parlour, The Grand Tour, The Grand Tour of Southeast Asia, Yangon. Bookmark the permalink.