(Un)Happiness, A Sense of Play and Making the Best of It

For starters, I have to say no, I am not regretting leaving New York. I still think moving back to Singapore was the best decision we could have made at that point in time.

That said, I can’t with all honesty say that we are necessarily happier, though we are indeed, much better off.  It’s such a huge difference.

The issue of happiness, or unhappiness, rather, has been on the Singapore public’s minds recently, after a Gallup poll revealed that Singaporeans are the most unhappy people on the planet, more unhappy than folks in Iraq and Afghanistan!  The poll posed a few very simple questions to those surveyed, including: Did you feel like you were treated with respect yesterday? Did you smile or laugh a lot yesterday?  Did you learn or do something interesting?  Are you well-rested?

Having been back home a mere three months, I would have to say that at many levels Singapore is a rather depressing place to be.  A major contribution to that is that there is very little respect for others as human beings.  I won’t go into more details, but suffice to say it hasn’t been easy for us since we’ve moved back because people can be mean, insensitive and even racist at an everyday level.  From hearing friends’ and families’ accounts of their experiences, it’s clear that a certain degree of bullying happens at an everyday level at the workplace; and that appears to be OK.  People in general also feel very disempowered and disengaged, which then also explains why they don’t stand up against the bullying.

This disengagement is perhaps the hardest for me to get used to.  In no other city have I witnessed a populace that is less eager to get home.  On the MRT trains (the Singapore equivalent of the Subway and Tube) after work, even on Friday evenings, there’s no spring in the step; no rush and eagerness to get to dinner or to a gathering with friends and family; no “OMG it’s Friday!!!  Woohoo!!” Nope.  Just the same auto-pilot that is turned on every morning during rush hour and continues on for the rest of the day.

Don’t get me wrong, I’m sure people play hard. It’s New Year’s Eve today and hordes of people will be at the New Year’s Eve foam party at Sentosa.  But that’s different from having a sense of play – a certain day-to-day lightness of being, that spring in one’s step – that’s entirely missing here.  You can (over)hear (the lack of) it in the conversations: these largely revolve around property, investments, property, cars, property, shopping, restaurants, and oh… did I add property?  The issue of property, in particular, will arise in almost any social situation one is in. I guarantee it. It’s depressing.

What about what’s happening to the European Union? What about the Indian rape victim?  The political transition in Japan, Korea and China?  Blank stares.  If you hear anything at all, it’s most likely to do with stocks and shares, investment opportunities and business. There’s very little general interest in world affairs for the sake of it. It’s depressing.

So what then? What’s the conclusion? Does this mean New York was better after all?  Am I secretly regretting the move?

My intent in writing this piece is not to rant, or to complain, but to simply reinforce a point I made long ago and that I’ve always held to: moving countries involves a trade-off.  No country / city is perfect. No country / city is the same.  And one has to be very clear what one is giving up when one decides to live in one over another.

I swapped a much poorer material quality of life in New York for a much better one in Singapore.  But in return, I gave up a richer spiritual (in a non-religious sense) and intellectual experience of day-to-day living, for something that is so much more superficial and ultimately unsatisfying.

There is no solution to this fundamental dichotomy beyond the acknowledgement and coming to terms with the one fact that matters: one has made the choice knowingly and simply has to make the best of it.

To making the best of it in the New Year!

Watch out for the rest of my Grand Tour of Southeast Asia and Manhattan in 12 Streets series (my way to make the best of it).

Oh, and here’s my cat, who makes me so happy…regardless of everything else. 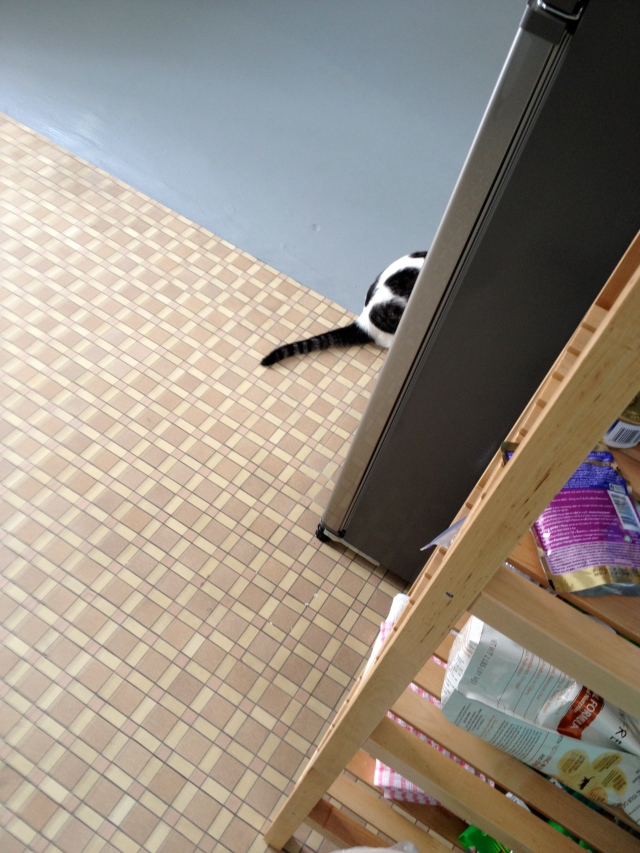 I am a wandering cityophile and pattern-finder who is pathologically incapable of staying in one place for any long period of time. When I do, I see the place from different perspectives, obsessive-compulsively.
View all posts by Kennie Ting →
This entry was posted in Home, Travel & Mobility and tagged Happiness, Making the Best of it, Moving Countries, New Year's Day, New York, Singapore, Unhappiness. Bookmark the permalink.