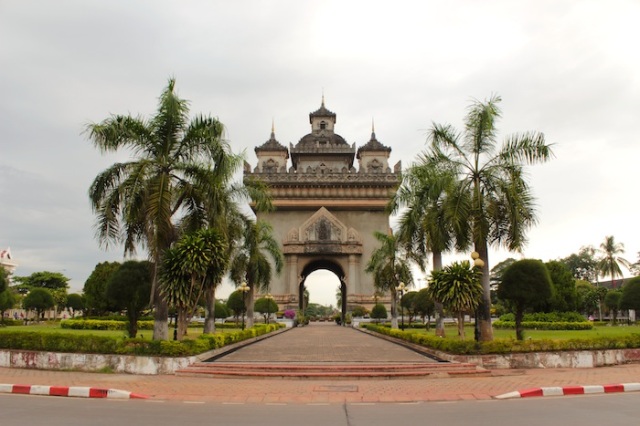 Patuxai, Victory Monument and symbol of Vientiane, supposedly constructed from concrete donated by the Americans for the city’s airport runway.

“Laos is as different from Vietnam as Big Sur is from Long Island.”  Hunter S. Thompson, Checking Into the Lane Xang

In Its Own Time

Ten years is a long time between visits.  But then, I never expected to revisit Vientiane when I was last there in 2003, on a business trip.  Then, my overwhelming impression of the city was of crumbling French colonial buildings doubling up as Municipal Government Offices – the likes of “Le Minist re d  L’Ag icultu e et des F rets[1]” with spaces alluding to letters that had fallen off from the official signs in front of the buildings.  That, and the food – oh the food! – which was surprisingly glorious even then, as it was this time around.

Vientiane, and Laos in general, is a bit of an anomaly.  It barely features in the travel literature of intrepid European and American travelers from the 19th century.  Hell, it barely features even in 20th century accounts of Southeast Asian history and politics.  But yet, Vientiane (and Laos) has a character that is entirely its own, not easily conflated with any other city (and country) in mainland Southeast Asia.  This distinct character is surprisingly easy to put one’s finger on.  There’s the delicious food, unlike any other kind of food in the region (alright, I shall stop gushing about the food!).  There’s also the very genteel, laidback way Laotians carry themselves; in particular the women, with their elegant silk sinhs, or traditional skirts made from intricately designed fabrics.  “Sabaidee!” you hear everyone say, in the most friendly and welcoming tones possible, to everybody else in general, including you: Hello stranger! How’s it going?

Buddhas in Wat Sisaket – the oldest temple in Vientiane, spared the destruction by the vindictive Siamese, because it was built in the Siamese style.

What’s also surprising is how this sense of (national) identity has remained strong, despite more than a century of Siamese imperialism, that saw the Lao Kingdom’s most important symbol – the Emerald Buddha, wrested from Vientiane and brought to Bangkok in 1779 (the relic presently sits in Bangkok’s Grand Palace).  For good measure, the Siamese returned in 1828 to raze to the ground the very temple that held the Emerald Buddha, along with many other temples and most of the mediaeval city.  It was brutal even by today’s standards, and in a sense, modern-day Vientiane is still reeling from that pivotal sacking by the Siamese, with the subsequent French colonisation in the early 1900s and Communist occupation in the late 1970s paling in comparison with that singular event of national humiliation. 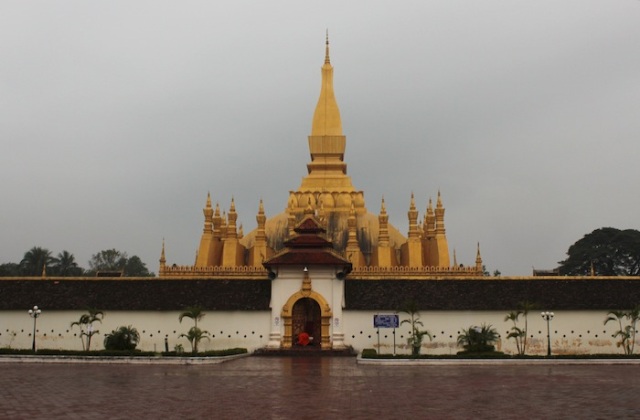 That Luang, the Golden Stupa, symbol of Laos.

The city’s other major national monument, the That Luang, is an impressive multi-storey stupa painted entirely in gold and occupying a Vientiane suburb. First built in the 1500s, it too has been ransacked and looted over the centuries, though the main body of the stupa has remained largely intact.  Ten years ago, I paid a visit to the That Luang, and I found it largely unremarkable, set, as it was, in a rather grey, uninspiring and desperately poor environs; and looking like it had been poorly painted over in gold, rather than gold plated, as it must have been at some point in its fraught history.  This time around, I found the stupa far more evocative and moving, resembling a meta-fictive impressionistic painting of itself (a painting of which actually existed at the gates of the Lao National Museum).  Partly because I attempted to visit in the midst of a full-on tropical squall, wherein I had the chance to contemplate the structure through the obscuring veil of heavy rain; and partly because, having been denied entry multiple times by Buddhist monks who kept directing me to alternative entrances that were also firmly shut (despite their having supposedly been open more than half an hour ago), the stupa that morning looked positively paradisiacal – alluring, enigmatic, and illusory by virtue of it being completely, inexplicably unattainable.

Chancing upon white elephants in Vientiane.

That inexplicability — Vientiane’s nature of existing and functioning in its own time and reality – was what made it completely unique, and utterly frustrating.  At the horrific monstrosity that is Patuxay – Vientiane’s version of L’Arc de Triomphe in Paris – I had a another taste of this alternate reality when the ticketing office manager repeatedly explained that the viewing platform was shut; until, that is, twenty minutes later, when it was obviously open and admitting a trickle of tourists[2].  Patuxay itself also epitomised inexplicability on multiple fronts.  I simply couldn’t see what the fuss was all about – the view from the top was far from breathtaking; and the view at the bottom was more likely to induce feelings of “what the f – – – were they thinking?!” than rapt contemplation. I couldn’t help but compare the Victory Monument to the proverbial and legendary white elephant – rare, ornamental, and utterly useless. While elephants are now an endangered species in the country, and the latter’s heyday as Lane Xang, or the Kingdom of a Thousand Elephants is long past, present-day rulers still clearly cherished the symbolic value of maintaining, at great expense, a white elephant of a more concrete variety.

Elsewhere, with the influx of tourists and foreign domestic capital, the city has been developing along more predictable lines. Much of the city centre by the Mekong waterfront has become a sort of Bangkok-lite, strewn with cosy bars, bohemian cafes, swank restaurants and boutique hotels housed in colonial-era shophouses. The twin thanons of Fa Ngum and Setthathirat, in particular, bustled with the kind of very blonde and very tan European, American and Australian bag-packing tourists traipsing all over Southeast Asia; while around the more up-market areas of Nam Phu Fountain and Thanon Samesenthai, one sees mature European tourists partaking of the excellent European-style restaurants and cuisines on display.  Occasionally, one catches proof, without shadow of a doubt, that the city has indeed moved on up in the material world.  These are the “young and fashionable types,” ubiquitous in all major urban metropolises in the world and who have, inexorably also slunk their way here in what is still the most inaccessible city and country in the region.  It’s no mean feat.

Thankfully, the city is still a generation away from becoming Bangkok on the Mekong, and its traditions appear to run far deeper than its former imperial liege city.  I woke up insanely early one morning to observe a ritual that has taken place for centuries here and in the other Buddhist nations of mainland Southeast Asia.  Each morning at the crack of dawn, dozens of novice monks, garbed in saffron-hued robes, emerge from the many temples in the city and take to the streets with their tiffin boxes. The city is prepared for them: at every major thoroughfare, Lao women, of the motherly persuasion, appear with small pots of rice and other condiments in anticipation of the monks’ appearance.  As the monks – all teenaged boys – finally coalesce in the horizon, in small groups of six or more, the women would beckon them over, and smiling, scoop out generous amounts of the food they had prepared.  Having received their alms, the monks would then bow deeply, speak a prayer of goodwill, and make their way to the next waiting alms-giver. 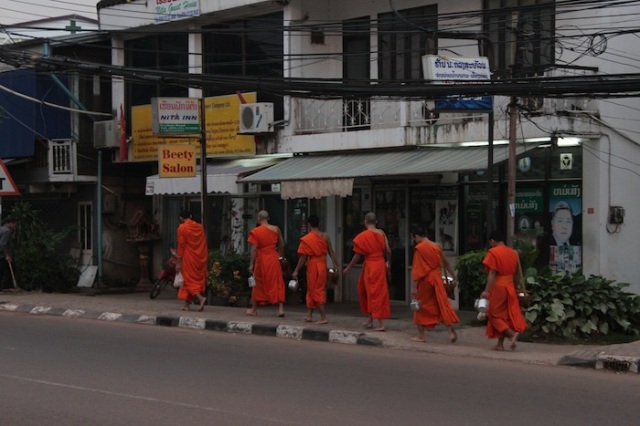 It was a moving sight.  And a far cry from the steady modernisation that was already starting to replace the city’s quaint vibe with the kind of generic and banal shopping mall slick that Asian cities in general view as a sign of economic advancement.  It’s hard to come down too harshly on economic advancement, however, since every city, particularly such a desperately poor one like Vientiane, deserves its own experience of trial, error, reflection and success. One can only hope that however the city decides to develop, it still keeps its eyes squarely onto what really matters – those inexplicable, age-old ways of doing things that make the city utterly frustrating, stuck in its own time and space, but like no other city that has come before or will come after. That, I think, would constitute successful development.

Statue of Lao King Anouvong, on the banks of the Mekong.

[1] I single out the name of this ministry for illustrative purposes only, it does not mean that this was the crumbling Ministry building I saw.

[2] Language drove inexplicability – the ticketing lady simply didn’t have the vocabulary to explain to me that she needed twenty minutes to get the place ready for visitors. Why that had to be done after opening hours is another question.  But I’m being too Singaporean.

I am a wandering cityophile and pattern-finder who is pathologically incapable of staying in one place for any long period of time. When I do, I see the place from different perspectives, obsessive-compulsively.
View all posts by Kennie Ting →
This entry was posted in Art & Architecture, Cities & Regions, Culture & Lifestyle, Landmarks & History, Photography, Travel & Mobility and tagged Kennie Ting, Lao PDR, Laos, Patuxay, Sabaidee, That Luang, The Grand Tour, The Grand Tour of Southeast Asia, Vientiane. Bookmark the permalink.