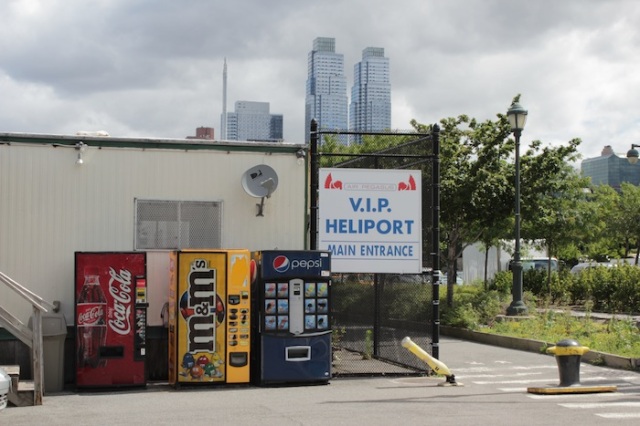 At the far western end of 30th Street sprawls a landscape of grand industrial desolation, presenting the sort of post-apocalyptic landscape that abounds in graphic novels of the superhero variety, and which the post-9/11 City Authorities constantly fear will come to pass in the immediate future.

North of 30th Street between 12th and 10th Avenues lie the West Side Yards, a rail yard owned by the Metropolitan Transport Authority, and used to store commuter rail trains operated by Long Island Rail Road.  The Yard sits at the north end of the High Line, a former elevated railway that was used to bring freight into the city up till the 1980s, and that has very recently been converted into a public park.

The entire expanse of the West Side Yards has been slated for development into a mixed-use commercial and residential area called Hudson Yards – the kind of gleaming, soul-less precinct of steel and glass towers within which plastic peoples put on Joker-grins and raise toasts to consumerism, excess and the continued hegemony of the 1%. The plan is to build an immense platform over the existing rail yards, on which office towers, luxury apartments, hotels, malls, parks and even a token public school will be constructed.  In the meantime, however, the yards sit like an open wound by the waterfront, crossed by a black scar that is the third, as yet undeveloped segment of the High Line.

South of 30th Street sits the Department of Sanitation’s (DSNY) fuel yards, as well as a parking depot for long-distance passenger buses (Greyhound, Peter Pan and the like).  Walking along these facilities in the early morning, when the streets are completely deserted, one feels an eerie sense of finality: that these buses and other sanitation vehicles parked along the street, have in reality, been abandoned, and left to rust; that the year may perchance be 2012, but the Apocalypse is all but over; humankind has been wiped out, and the City has been left entirely in state.

At the 11th Avenue intersection, looming surreally over everything else in this wasteland, is the ohm Tower.  A totem to capitalistic excess, its every glittering facet and advertised amenity is a slap to the face of honest hard work; a testament to the kinds of orgiacal and over-the-top indulgences that New Yorkers aspire towards as a sign that they have arrived in life.  Resonating with the ohm, like a quivering yoni to its lingam, is the operating VIP helipad on the Hudson waterfront, just beyond the merest sliver of land that also functions as a public bikeway and pedestrian promenade. This helipad transports the secretive rich, desirous of remaining above the seething, faceless fray they exploit, to their privileged playgrounds at stratospheric heights.

East of the ohm Tower sits a transitional zone between the industrial, commercial and residential. Occupying one entire block is the United States Mail’s Morgan General Mail Facility, housed in a massive Art Deco building.  The building’s façade is adorned with totemic cartouches of the American Bald Eagle, possibly imbued with Masonic significance when they were blasted onto the gray stone. The facility stands silent and fortress-like, providing no insight into the furtive machinations within.

Around the Mail Facility sprout faceless, ghostly office blocks, apartments and tenements, offering scant insight also into the recent histories that define them: those traces of building names on brick facades, or hastily scrawled script on front awnings.  In the post-apocalyptic world, these would stand vacant but evocative, like concrete mountains in a perverse Chinese landscape painting; far in the distance, intrepid explorers would be just visible, scavenging for scrap metal and electronic waste. 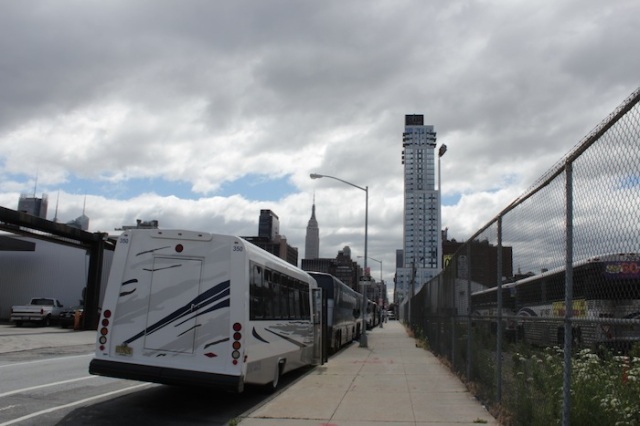 2 – View from 12th Ave towards the Empire State Building and the ohm Tower. 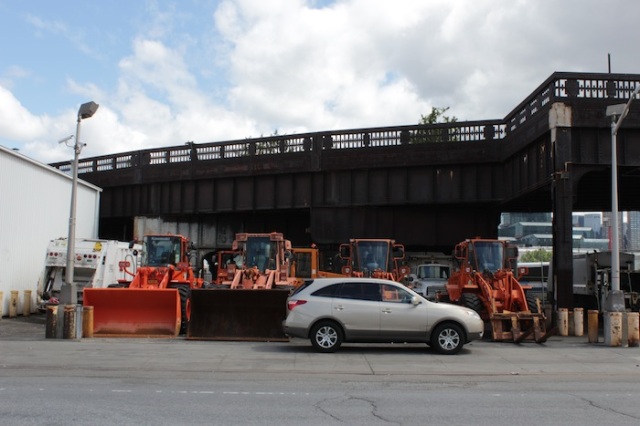 3 – Department of Sanitation vehicles parked underneath the High Line. 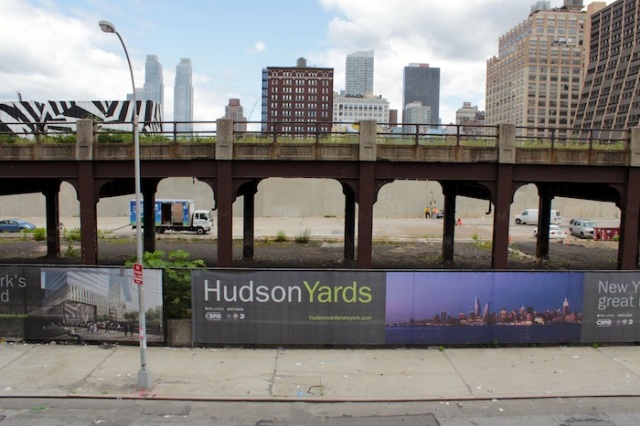 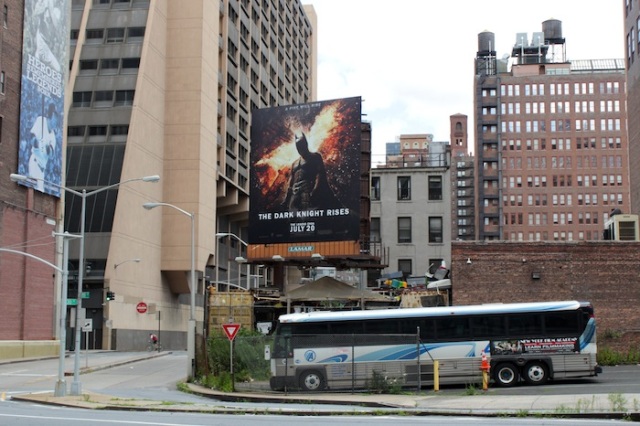 5 – The Dark Knight Rises in Gotham. 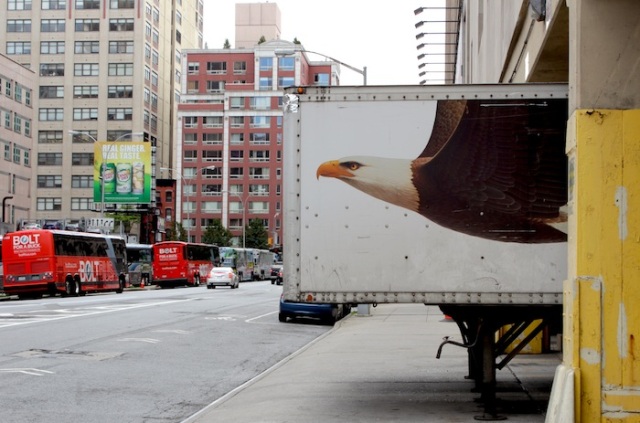 6 – The American Bald Eagle, in one of its totemic incarnations. 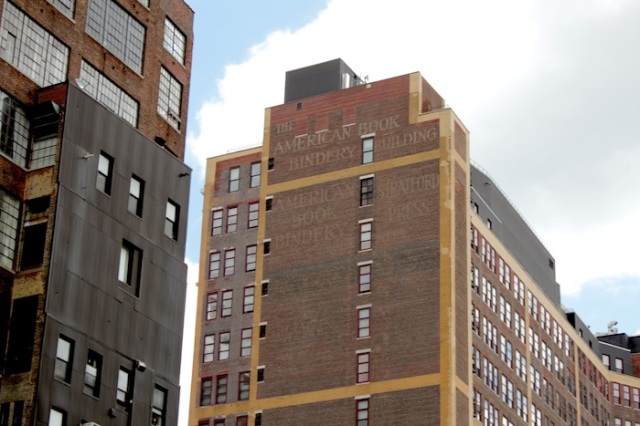 7 – The American Book Bindery Building, now a student dorm for the Fashion Institute of Technology. 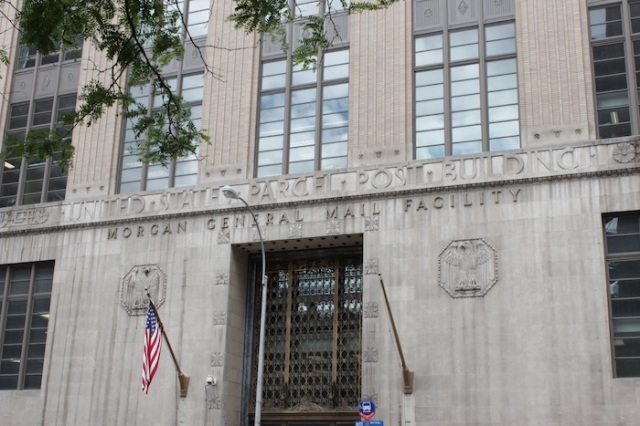 8 – Art Deco façade of the United States Parcel Post Building, with cartouches of the Bald Eagle. 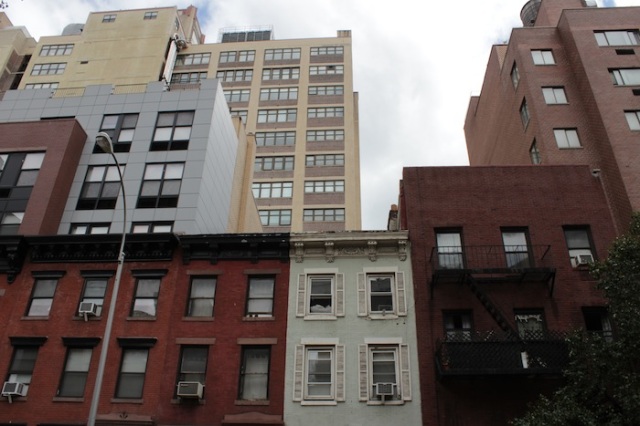 9 – Stark residential landscape consisting of a mix of tenements and high-rise apartments. 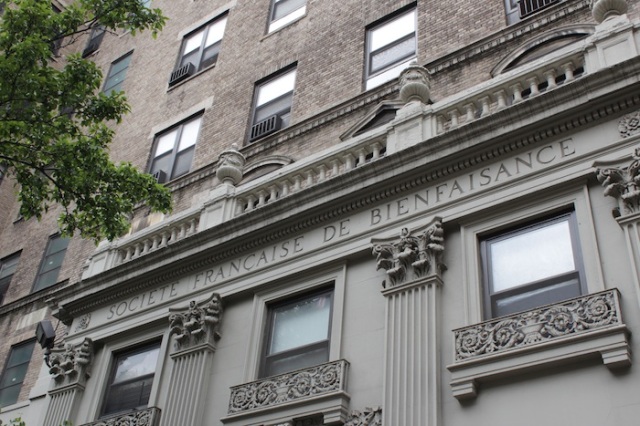 10 – No. 330: once a hospital, opened in 1928, by the Société Française de Bienfaisance (the French Society of Well-being). Now a residential apartment block called the “French Apts.”

I am a wandering cityophile and pattern-finder who is pathologically incapable of staying in one place for any long period of time. When I do, I see the place from different perspectives, obsessive-compulsively.
View all posts by Kennie Ting →
This entry was posted in Art & Architecture, Culture & Lifestyle, Landmarks & History, New York and tagged 30th St, Gotham, Manhattan, Manhattan in 12 Streets, New York, Totems and Time Travel. Bookmark the permalink.