Hamburg is a very old friend of mine.  I love the city and it’s probably the only other city in Europe I could see myself living in (besides London).  A large part of it is because it’s a port city, and so it reminds me of my hometown Singapore, and also of London.  I was visiting an old friend in Hamburg late Fall last year and I took the opportunity to check out a new development on the outskirts of the Old Town, and something that didn’t quite exist the last time I was in Hamburg (early 2000s’).  This was HafenCity (or Harbour City in English).

In my mind, HafenCity is probably one of the most impressive examples of New Urban Precinct development on a monumental scale  (the other example being Marina Bay in Singapore, which I will get to in this NUP series as well). It’s impressive in terms of scale and ambition – apparently the largest scale development in Europe! – though as far as the uniqueness of the project goes, it’s really just “keeping up with the Joneses,” so to speak.  I mean…Canary Wharf, anyone?  Dubai and Abu Dhabi also spring to mind (and not for a good reason).

Here is a photo-journal of some of the key features of the precinct, and my thoughts on them. 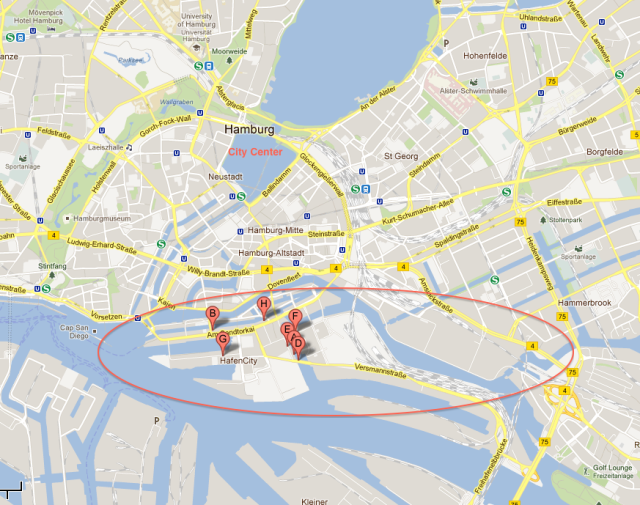 Map of HafenCity – relative to the City Center 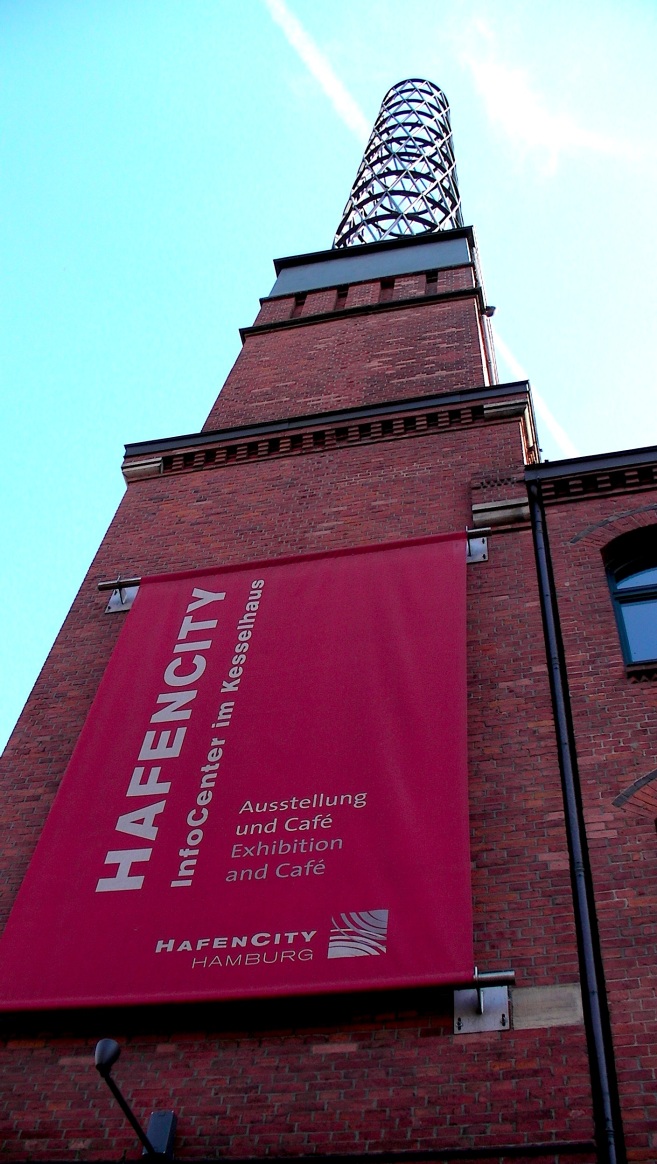 The HafenCity Infocenter – Naturally housed in a refurbished post-industrial Boiler House complex. It includes an exhibition area, cafe, as well as a small outdoor performance space. 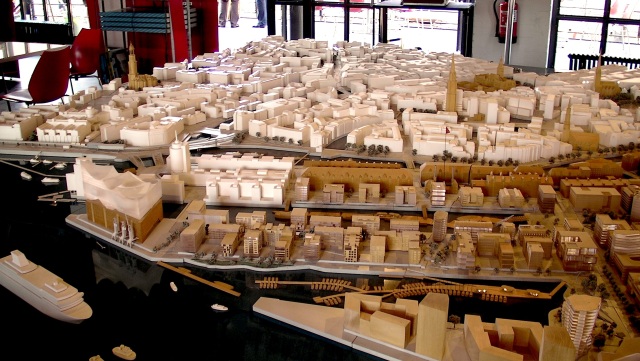 HafenCity Model – This shot shows the newly completed areas of HafenCity, which I strolled around in. To the left is the Concert Hall by Herzog and de Meuron (they crop up frequently in this NUP series).

Note that the completed area represents only perhaps 10% of the total area to be developed – about 157 hectares of space – which will increase the total space of Hamburg City by a whopping 40%!  I was and still am slightly sceptical.  After all, Hamburg only has 1.78 m people, Greater Hamburg 4.3 m.  That makes the development strategy a supply-driven one: build and they (as in the WORLD) will come.  The HafenCity Marketing pamphlets are appropriately in a range of languages, most notably Chinese. 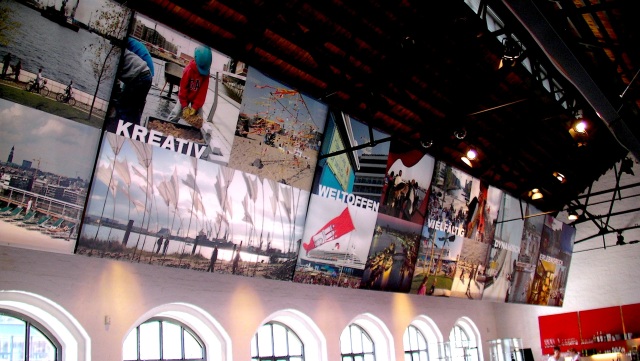 HafenCity Branding – My friend was very excited about the branding for HafenCity – how it was being positioned as a one-of-a-kind lifestyle-oriented precinct marrying contemporary and traditional architecture, with beautiful waterfront public spaces, opportunities for creative industries, an international flair, etc, etc.   Well… almost all such waterfront developments all around the world these days are being positioned as “unique lifestyle precincts” aren’t they?  I told my friend (rather ungratefully) that HafenCity qualified as a Non-place – generic, with very little “sense of place”; a development the likes of which could be found in most cities of the world these days.

Residential Apartment – As if to prove my point, we observed and critiqued the striking but context-less contemporary architecture of the residential apartments on the Am Sandtorkai / Dalmannkai quarter – the first quarter to be fully completed and apparently, fully occupied.  This building is lovely, in a stark way, but if you look at it, you wouldn’t think you were in Hamburg. You could be anywhere really – Berlin, London, Singapore, Shanghai, Johannesburg, Dubai, Khartoum…

Public Space – In the Am Sandtorkai / Dalmannkai quarter. Great conversion of previous ship-berth into private residential and public space. It looks lovely but I again I had an fleeting sense that I was in Barcelona, or Canary Wharf in London.

Strandkai – A quick glimpse of the adjacent quarter, Strandkai.  Not quite completed yet. To the left is one of the first buildings constructed, the Marco Polo Towers – which apparently caused some controversy for its architecture when it first appeared. It is also famously occupied by some of the most wealthy residents of Hamburg.

Cruise Center – Also in the Strandkai quarter is the Cruise Center, where the Queen Mary II, a transatlantic (New York – Hamburg) cruise ship is moored.  The Cruise Centre will add an “international flair” to the precinct, apparently. Though “international” is probably a byword for placeless, faceless, functional.

Office / Residential Space – View of office and residential buildings in the adjacent Am Sandtorpark / Grasbrook quarter. These were newer than in Am Santorkai / Dalmannkai, but did not have a similar waterfront view.  The quarter was being marketed more as a “green” mixed-used residential and office precinct centred around a park. Again, this could be a view onto Singapore, Shanghai, or Nairobi.

With a surfeit of generic-ness, there are three tried and tested solutions for injecting a sense of place:

HafenCity has pretty much gone by the book.

Constrast in Styles – Just behind the residential apartments in Am Sandtorkai / Dalmannkai peeks the 18th century facade of Speicherstadt (or warehouse district), one of the world’s oldest warehouse districts, built in the late 1800s.

Historic Quarter – Another view of the stunning Speicherstadt, reminding one of Venice, particularly at night, when the entire district of red-brick warehouses and canals is eeriely lit with spotlights.  They are still largely used as warehouses, though they also contain a few of Hamburg’s major tourist attractions – the Miniature Wonderland and Hamburg Dungeon, etc – and are themselves attractions in their own right. 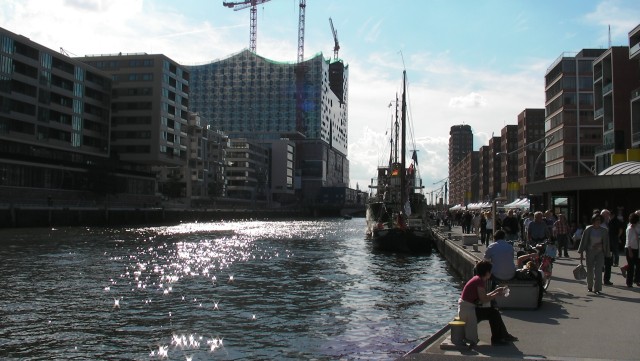 Superstar Architecture – Just a block from Speicherstadt is the surreal Elbphilharmonic Concert Hall, evoking the waves of the Elbe.  Messrs Herzog & de Meuron have ingeniously plonked the entire concert hall – encased in a very post-modern steel and glass fixture that is fiendishly difficult to construct and has caused multiple delays – atop a former warehouse that is now the multi-storey carpark.

Hamburg Skyline – The Concert Hall will transform and dominate the Hamburg skyline, previously defined by its many church steeples and by the Port of Hamburg. Clearly, the objective of these developments is to let world know that Hamburg is HERE!  LOOK AT US!  WE’RE HERE!! WE’VE ARRIVED!!

As you can probably tell, I’m not a fan of such “iconic star-chitecture.” I see it as the preserve of third world cities with paternalistic and authoritarian Governments – Beijing, Dubai, Abu Dhabi, Riyadh, Astana (Kazakhstan) – seeking to “place themselves on the world map” and to impart artificial “meaning to [their] meaningless existence” (courtesy of Slavoj Zizek, Living in the End Times) by whatever means possible.  I find it a little crass and sad that Hamburg – such an elegant and beautiful city with a long and illustrious history – feels it has to condescend to such a mad scramble for meaning and international attention. 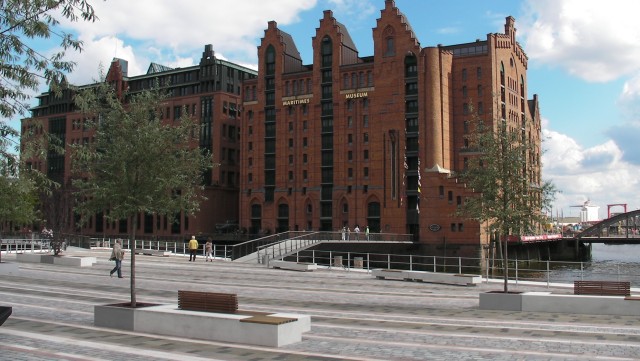 Knowledge Quarter – Slightly further away, the Maritime Museum marries historic architecture with the need for place-specific cultural institutions.  Situated in the Elbtorquartier, it will be part of HafenCity’s “Knowledge Quarter,” also housing a new university and another starchitect-helmed (Rem Koolhaas) Science Museum.

Outdoor Markets –  The endless boardwalk in HafenCity was probably the highlight of the precinct. The crowd certainly seemed to agree.  While the design wasn’t anything groundbreaking, the outdoor markets (selling German crafts and food) and the permanently moored German yachts evoked Hamburg’s very specific maritime past and added a very slight sense of place to the otherwise disorienting non-placeness of the whole area. 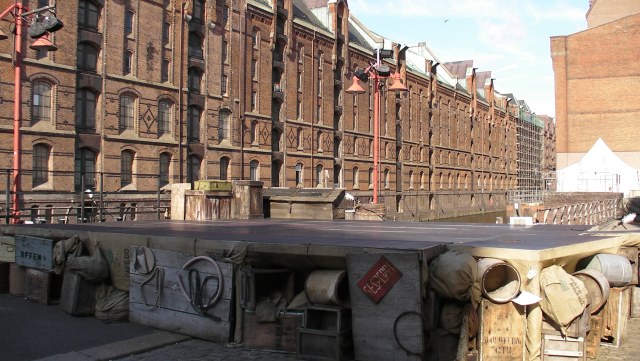 Place-specific Performing Arts – Not far away, right by the HafenCity Information Centre, an outdoor performance space plays host to a hugely popular theatrical performance called Jedermann (Everyman), based on an ancient morality play about a merchant who sells his soul to Death.  The performance, which takes place a few times each week in the evenings, uses the stark, eerie warehouse setting of the Speicherstadt as its backdrop and is a remarkably successful example of place-specific performing arts.  At one point, Death arrives on set floating on a gondola along the canals.  Rain or shine, the show is consistently booked out.

A Network of Elevated Walkways – Another ingenious public amenity in the precinct is a series of public elevated walkways and pedestrian bridges that not only link Speicherstadt to Am Sandtorkai / Dalmannkai, but also link all the residential buildings in the latter precinct, affording the visitor a great view of the contrast in architectural styles and also of the waterfront. As evening fell on HafenCity, I took a stroll along its buildings.  The whole area was deserted except for half a dozen restaurants and pubs.

I assume most night-time entertainment options would be associated with the yet-to-be-opened Concert Hall. That is slightly worrying since a good public performing arts venue really also requires an ecology of pre-show and post-show leisure options around it. Otherwise it risks being an artificial, isolated island of activity.

The other inhabitants of HafenCity – As night fell, the entire precinct became over-run with spiders – thousands of them. Apparently when the precinct was designed (so my friend told me) they didn’t think to include trees and other options for birds to roost and nest. What ensued was a precinct devoid of any sort of bird-life. Without a natural predator, spiders have thrived, turning HafenCity at night into a kind of spectral ghost town.  They pretty much constitute the night-life here.

Conclusion – Personally, I didn’t like HafenCity at all. I thought it too manufactured, too slick, too sterile, too (dare I say this?) Singapore.  Its carefully-curated but inadvertent characterless-ness catered to a class of newly wealthy and young (international) urban professionals who were transient and not likely to invest emotions into the city.   The project just seemed like a variation on Canary Wharf, but at a much larger scale.

Granted, Canary Wharf’s success makes it somewhat of a model to emulate. However, with a long history of finding its own path of economic development, the Free and Hanseatic City of Hamburg could have imposed its own individual, pragmatic character onto the development, rather than schlep around in the red ocean (to borrow a term used in Blue-Ocean Strategy) of “star-chitects” and consumption-driven lifestyles .

The next time I visit, I’m sticking resolutely to the Old City, perhaps descending down to HafenCity for a weekend stroll to check out the waterfront.  There just isn’t enough to see or do there, just yet.  Though, I have to say, even if I were ever to live in Hamburg, I would not consider HafenCity.  The environment is simply too alienating.  If I were only a temporary resident, I wouldn’t want to make the mistake of living in my own little bubble at the city’s periphery. I’d want to be in the thick of it all.

Finally, I couldn’t resist but end on a few more iconic and reassuring views of Hamburg. 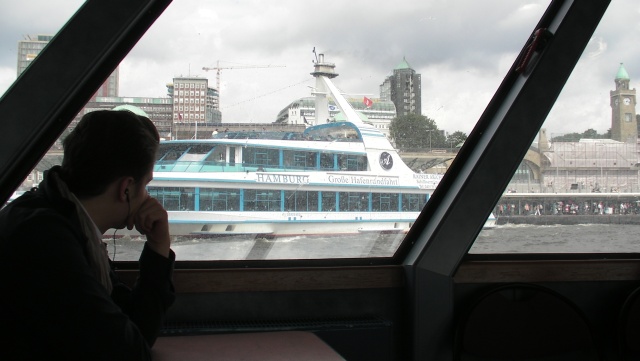 On the Elbe River 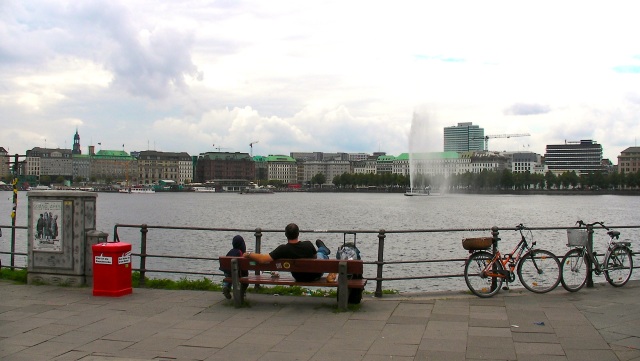 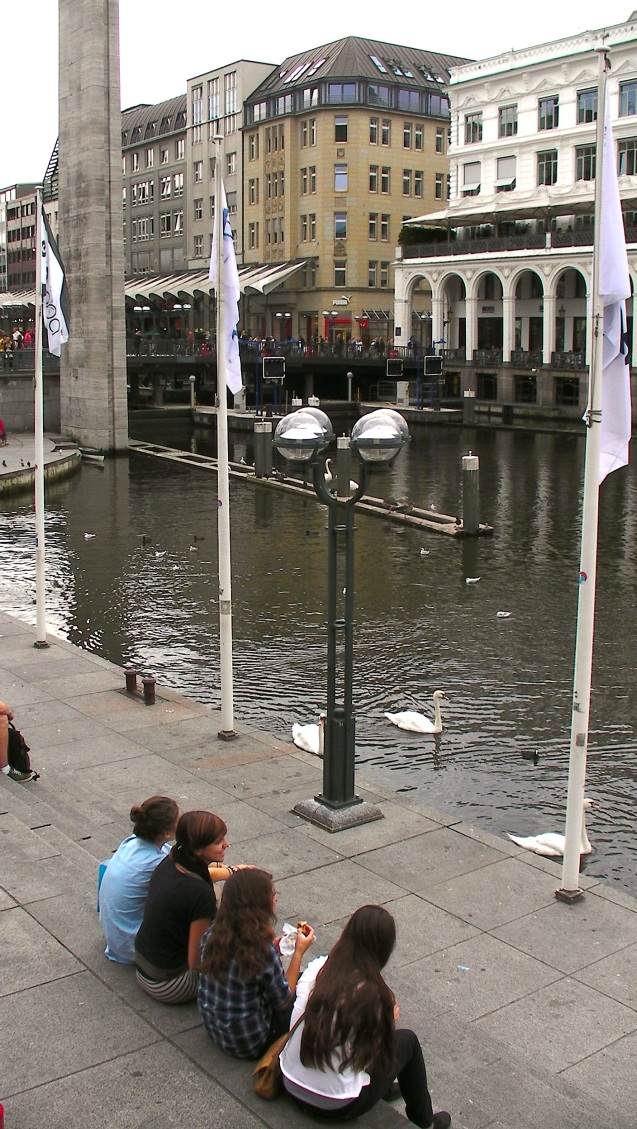 Chilling by the old Town Square – my favorite spot in all Hamburg.

I am a wandering cityophile and pattern-finder who is pathologically incapable of staying in one place for any long period of time. When I do, I see the place from different perspectives, obsessive-compulsively.
View all posts by Kennie Ting →
This entry was posted in Art & Architecture, Cities & Regions, Sociology & Urban Studies, Travel & Mobility and tagged Hafencity, Hamburg, New Urban Precincts. Bookmark the permalink.