As the saying goes:上有天堂，下有苏杭 –  Suzhou and Hangzhou are Heaven on Earth.

I had been wanting to visit Suzhou for years, after my first attempt to do so 5 years ago was scuppered by a very bad cold.  Hangzhou had lived up to the saying very poorly and so I was slightly worried that Suzhou too, might be an underwhelming experience.

My brother, living in Shanghai, hadn’t helped. “What’s there to see?!” he had said, “It’s just gardens. And one garden looks just like another. Don’t forget also that it will be full of Chinese tourists.”

I was reminded of traveling in Europe, where after your third cathedral or palace, everything starts looking more or less the same; and of Hangzhou, which had (indeed) been overwhelmed by Chinese tourists and their tour-guides screaming through loudspeakers in the Temple of the Soul’s Retreat （灵隐寺）. What a delight.  Not.

Suzhou, however, had a lingering calm…

Forget the UNESCO World Heritage gardens. My brother was dead right. They were packed with (Chinese) tourists.  And the minute I sat down to contemplate a view, ten of them would congregate behind me and titter confusedly amongst themselves – “看啥儿？看啥儿？”  What’s there to see?  What’s there to see?

It’s when I stumbled onto Pingjiang Street （平江路）– an almost deserted historic canal street – that the Suzhou I read about in books when I was a child sprung to life.  Walking on the flagstone path along that canal, strangely disassociated from the hustle and bustle at both ends of it, I lost myself in a very rare (and quaint) feeling of old China – inns （客栈）with red lanterns hung out to indicate that there were vacancies; the ubiquitous character for tea （茶）pasted on the old teahouses with their carved wooden doors; locals actually sitting around having tea.

I spent the rest of an afternoon on the second floor of an old teahouse by the side of the canal: a place that had managed, miraculously, to escape the ravages of the Cultural Revolution.  It was sweltering hot.  And the latte I was drinking was the worst latte in the world (I should have ordered a tea, I know).  But at that particular moment, I thought that there was nowhere else in the world I wanted to be.

Silence. The tinkle of a wind-chime.  The grey roofs of Suzhou…

[Three things to do in Suzhou if you only have a day:

a) A visit to the excellent I.M. Pei designed Suzhou Museum in the morning (to be profiled in an upcoming post).  The museum is free but the lines are long.  Get there early.

b) After lunch, pop into the Couples’ Garden Retreat (藕园) , a small and delightful garden slightly off the beaten path, and with (relatively) less tourists milling around, actually a pleasant experience.

c) End the afternoon with a leisurely stroll down the historic Pingjiang Street in central Suzhou, followed by a pot of Biluochun tea （碧螺春） – a Suzhou specialty which literally means “crimson whelk spring” – in one of the many teahouses lining the street. ] 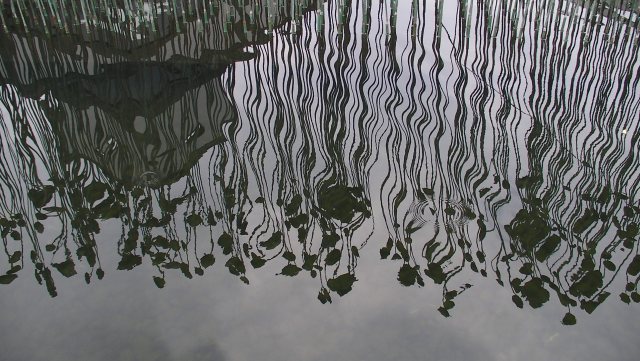 潭中莲影  – Reflections of lotus in a pond 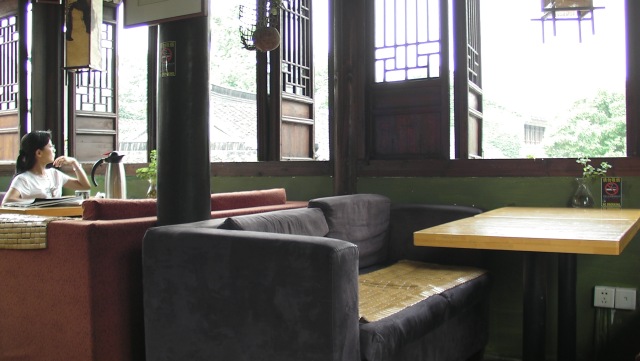 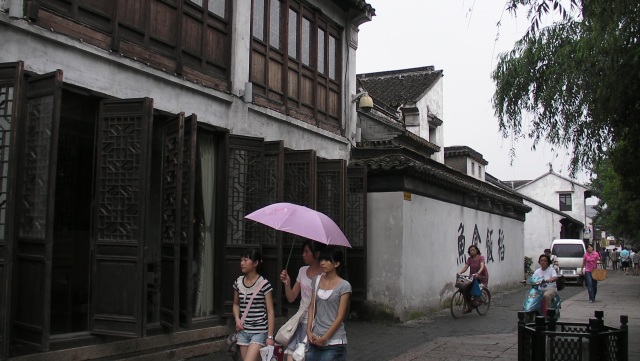 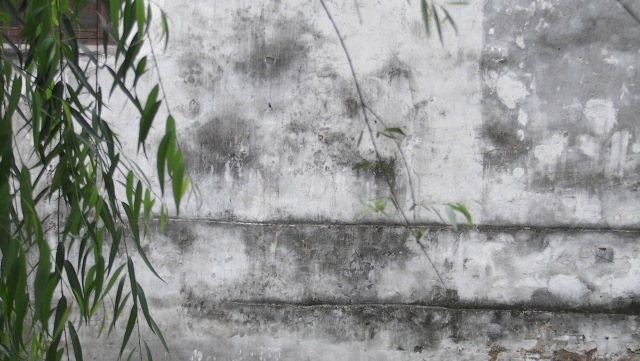 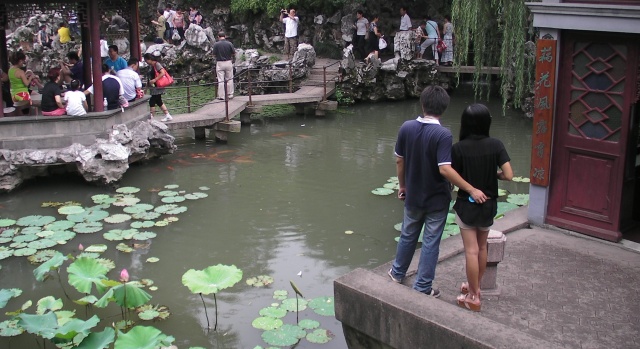 藕花风露宵凉– Lilies… Wind and dew…  A chilly evening.  [That’s what the calligraphy to the right of the lovers reads. The first character has a double meaning: lilies, and lovers. In accordance with the conventions of Chinese poetry, the line (metonymically) evokes a cool Spring evening in the garden, lovers holding each other close to keep themselves warm.]

I am a wandering cityophile and pattern-finder who is pathologically incapable of staying in one place for any long period of time. When I do, I see the place from different perspectives, obsessive-compulsively.
View all posts by Kennie Ting →
This entry was posted in China, Landmarks & History, Photography, Travel & Mobility and tagged China, Cities, 碧螺春, 苏州, 苏州博物馆, 藕园, Heaven on Earth, Pingjiang St, Suzhou, Travel, Water, 梦游. Bookmark the permalink.

2 Responses to 梦游苏州 Dreaming of Suzhou